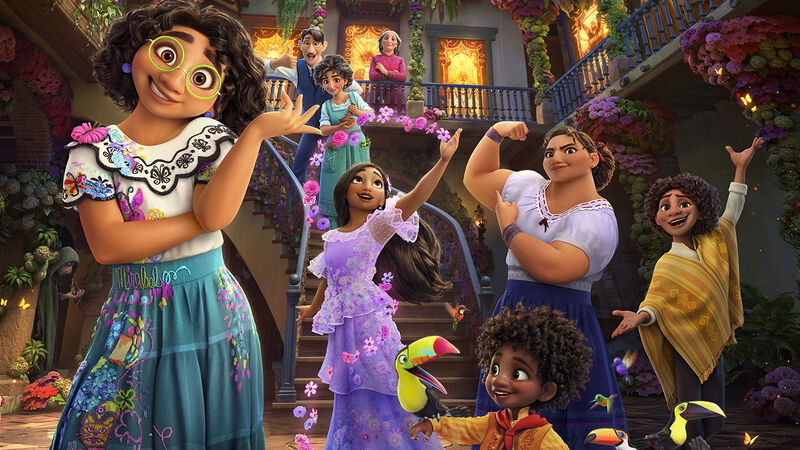 ‘Encanto’ Offers a Twist on the Typical Disney Heroine Journey

So where does becoming a Disney heroine fall on a list of acting accomplishments? When I spoke to Stephanie Beatriz about Encanto, she put it like this:

“Eric, it’s number one! I mean, legitimately it is number one! I’m a huge, huge Disney fan. And I know everybody says that, but I really am. Those VHS tapes basically raised me. I had my bachelorette party at Disneyland. I’m a deeply, deeply invested Disney adult. When I found out that Disney was making a film that was going to be set in Colombia and that Lin-Manuel Miranda was writing the music for it, I lost my mind. And I immediately started shooting off emails to my agents and managers saying, ‘How can I audition for this!?’ So the fact that I got an audition alone was a dream come true. And then when I actually booked it, I felt like… Well, I still sometimes feel like I’m dreaming, like I have manifested and created all of this. And I know that I’m not and I know this really real, because I can feel this chair underneath my butt [as we talk], but it still feels wild.”

The 60th film from Walt Disney Animation Studios, Encanto stars Beatriz (Brooklyn Nine-Nine, In the Heights) as Mirabel. Her family, the Madrigals, have been given an incredible gift, where everyone has their own special power like super strength, healing abilities, or shapeshifting – everyone that is, except Mirabel, who was mysteriously given nothing when the time came for her to claim her gift at a ceremony each child goes through.

Beatriz and Encanto Director Byron Howard (Tangled, Zootopia), Director/Co-Writer Jared Bush (Zootopia, Moana), and Co-Director/Co-Writer Charise Castro Smith (The Haunting of Hill House) spoke about why Mirabel is different from the norm for Disney heroines, working with Miranda — who wrote eight original songs for the film — and more.

THE ROAD TO COLOMBIA

Byron Howard noted Encanto began with conversations with Lin-Manuel Miranda about a potential new film. “Five years ago, almost to the day, we started talking to Lin about what this project could be. Jared had just finished working with him on Moana, which obviously turned out great and they did an amazing job on that. Jared and I love working together, we’re both musicians, and so we were very interested in doing a musical. Lin wanted to do another [Disney] musical. Hurray, that sounded perfect! Lin was very interested in setting this in Latin America and the big question for the three of us at that point was where exactly to set this. And that’s when Colombia started to come into the conversation. It’s this amazing crossroads of everything in Latin America. It blends culture, tradition and dance and food and music in such a great way. We got very interested in exploring Colombia from that point on.”

Stephanie Beatriz, who previously had been in a Miranda musical via the movie version of In the Heights, said, of combining Miranda’s talents with her Disney heroine debut, “Traditionally, in Disney animation, the music is such a huge part of the storytelling. There’s so many big storytelling elements that come through the songs in these movies. Disney has this incredible history of creating, particularly for heroines, but all the Disney heroes, that through the songs, you get to sort of peek inside this character’s brain in this really magical way that you don’t really get in any other kind of art form. Maybe you get it in musical theater, but in musical theater, you don’t get the advantage of animation telling this incredible, visual story at the same time. So on top of all that, then you have a songwriter like Lin-Manuel, and the depth and complexity of what he’s done in the songs. I feel like he could probably write a book about it…. And I’d be excited for that book to come out. And Lin, I’ll write the foreword!”

Charise Castro Smith explained that from early on, Encanto had locked in the core concept of a girl who was the only one in her family without a magical gift, noting, “As we started developing the characters and started working on her, we just realized what a vulnerable position to be, what a complicated and awkward and just utterly human and relatable thing that is to feel like you’re kind of the unspecial one amongst everyone else who’s special and perfect and has it all figured out. So in a way, she’s all of us.”

Mirabel stands out from the Disney heroine norm in a few days… including having bad eyesight. As Beatriz recalled, “I saw an initial drawing of all of the members of the family, and I saw Mirabel and her curly hair, and her nose like mine and her glasses. I wear glasses and all of it was really satisfying, on a deep level. I’m not sure that I knew that I was missing that [before]. But when I saw it, something inside me responded to it in a way like I had been thirsty for that. It was really, really incredible to see the character design. And then to see it animated as we went along and to see things start to get flushed out was really wild, because some of her facial expressions are mine! The faces that she pulls, sometimes I’m like, ‘Oh, no, I’m so awkward!’”

Smith had high praise for Encanto‘s leading lady, saying, ‘Mirabel’s an incredibly specific and wonderful character largely thanks to Stephanie Beatriz, who did an amazing job with the vocal performance. She’s funny, she’s vulnerable. She ad-libbed a ton of lines; a lot of her comedic chops are all over the film. And also, she’s an amazing singer. We got really lucky with that casting.”

NOT YOUR AVERAGE DISNEY JOURNEY

From Ariel to Belle to Moana, Disney heroines often are looking outward, seeking new journeys and destinations away from the life they grew up with. Encanto though is notably different in that Mirabel isn’t looking to leave her home at all — and in fact the film rarely ventures away from her town — but rather simply wants to feel like she truly fits in with them in a way that has always felt missing.

When I mentioned this to Howard, he replied, “We’ve talked a lot about this over the last five years. Mirabel wants, more than anything, to be an integral part of her family. She wants to contribute as much as the rest of these amazing people around her, so she is very differently-minded than a lot of our heroes and heroines are. Rather than kind of striking out in the world, everything she wants is within a couple square square meters of that house. And that was unique.”

Howard added, “Even her ‘I want’ song [‘Waiting on a Miracle‘] is not typical of what we do. It’s very angsty, in a great way. It’s this yearning and this moment where she admits to herself how much this has been difficult for her for the last 10 years. Stephanie is very much like this, too. She’s very much an old soul. And we wanted Mirabel to feel the same way, like she feels like someone who’s been through a lot but has a great sense of humor about it, and has a great emotional maturity.”

Beatriz admired how Mirabel’s goals could both feel both similar to beloved Disney tales, “And yet, deeply different than a lot of Disney journeys. But, in a way, it’s kind of going back… If you think about something like Cinderella, most of that story does take place inside a family. That family, unfortunately, feels deeply broken and in a way it’s never going to heal unless she’s able to leave. In this story, the family is starting to break and by staying inside that unit and trying to explore it in that way, it’s like a mirror image of one of Disney’s first films. I also personally really love that the journey for her isn’t about leaving and getting married, leaving and falling in love; the journey for her is something very different and it’s an adventure in a completely different way.”

THE SONG YOU WON’T ESCAPE

Disney movies are known for having incredibly memorable songs – songs so catchy, kids especially can’t stop playing them on repeat, to the point that even if a parent logically know it’s still a great song, they might need a break from it for a bit.

When I jokingly asked which of Encanto’s songs might become that, Beatriz chose a great number about Mirabel’s uncle, the black sheep of the family, Bruno (voiced by John Leguizamo), who vanished years before. “In my house, we’ve been singing ‘We Don’t Talk About Bruno’ a lot… Over and over and over and over and over. In fact, I sang it to myself so much when I was pregnant, that I sang it to my daughter maybe a week after she was born, and she looked at me… And this is a newborn, right? But she recognized it because I sang it so friggin much! So I feel like it’s gonna be that one. I could be wrong, but that’s the one that my kid’s probably gonna sing over and over.”

For his part though, Jared Bush felt, “The trick with this movie is that there’s a lot of different types of songs. I think the songs are more varied than most of our movies and [Lin] did an amazing job really showing you the gamut of the type of music in Colombia. So all of them are very different. My guess will be that a lot of kids will try to learn the speed of ‘The Family Madrigal,’ the opening [song], which is the fastest song in Disney history. I think kids will listen to that on repeat just to try to figure out what that patter is. I think ‘Surface Pressure’ will be one that a lot of people will sing too. And ‘We Don’t Talk About Bruno’ I think is gonna be a really big one. The real gift of Lin’s is that he writes songs that you actually want to go back to and listen to more, so I think we will actually avoid the ‘Not this one again,’ but more of a, ‘Oh my God, the first time I heard that, I didn’t realize this and this was happening.’ It’s definitely one of those intentionally repeat-listen type of movies.”

As Bush mentioned, “The Family Madrigal” is a notably fast-paced song, performed by Beatriz, as Mirabel explains all the amazing abilities her family has to local children. The song gets faster and faster as it continues and Maribel packs more information into it, culminating in a truly impressive — and dizzying — display of speed singing by Beatriz. Recalling recording that song, Beatriz said, “It was definitely hard! I have an incredible vocal coach named Eric Vetro, and one of the things he’s really talented at doing is helping you figure out how to tell story while you’re singing. A coach helps you figure out how you’re going to be able to shine the best and Eric really did that for me in that song. Sometimes it was like ‘You have to breathe on this quarter note, otherwise you will pass out by the time the song is over.’”