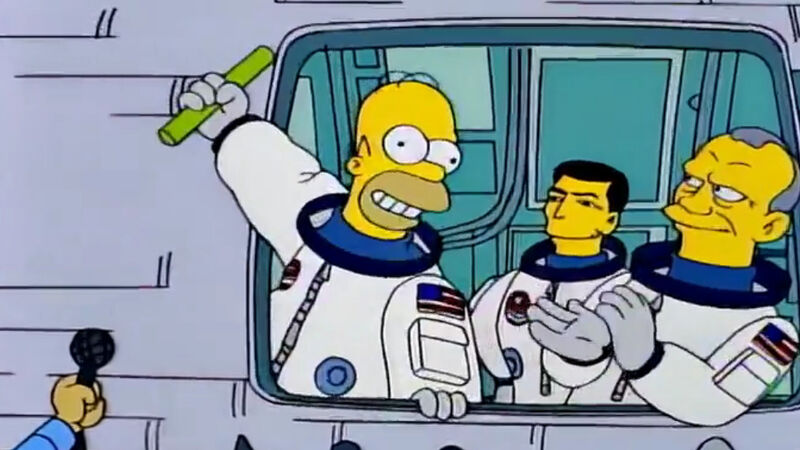 The Greatest One-Joke Characters Of ‘The Simpsons’

In 30 years of The Simpsons (Watch now on Disney+), the town of Springfield has revealed enormous cast of unique weirdos, sad sacks, and misfits (more than 4,000, by our count). Some of the most memorable characters, like Michael Jackson impersonator Leon Kompowsky or Lisa’s substitute teacher Mr. Bergstrom, appeared in just one episode and were never seen again. But while those one-off characters were the heart of their particular episode, many of the funniest and most outlandish moments in “The Simpsons” involved characters who appeared for just one scene.

These 10 characters have made the most impact on The Simpsons in the least amount of screen time, delivering some of the most quotable lines that made the sitcom great.

Bart’s prank calls were a recurring element of his early season “Eat my shorts” attitude, tapering off in the middle seasons before popping up again recently. The setup is generally the same: Bart calls Moe’s Tavern asking to speak to someone with a clear double entendre for a name (Al Coholic, Mike Rotch). Moe always seems to stumble right into it (“I need Amanda Hugginkiss!”) after which Moe growls threats at the caller he’s never seemed to identify.

By the middle of Season 5, however, the writers decided to turn the prank call premise on its head. Bart calls asking for “Hugh Jass.” Moe shouts, “Somebody check the men’s room for a Hugh Jass!” But this time, a man named Hugh Jass actually happened to be in Moe’s, and when he picks up the phone Bart is stuck. “I’ll level with you, Mister,” Bart says. “This is a crank call that sort of backfired, and I’d like to bail out right now.” Jass is unperturbed, and after he hangs up says to himself, “What a nice young man.”

After Homer plays a relatively innocent prank on Moe — loosening the top of the sugar jar so it all dumps into Moe’s coffee — Moe is infuriated and bans Homer from Moe’s Tavern for life. As Homer tries to find a new watering hole by visiting bars around Springfield, this dapper fellow looking suspiciously like Homer wearing a top hat and moustache, walks into Moe’s and asks for a drink. Moe physically throws the man out of the bar.

While he lays unconscious on the sidewalk, Homer walks by and exclaims, “Oh my God! This man is my exact double.” Then in the next instant, Homer expresses the same excitement over spotting a dog with a puffy tail and chases it off, leaving his doppelganger (who is clearly in need of immediate medical attention) lying on the curb.

This is the episode where NASA decides to gin up TV ratings for the space program by training a regular guy — Homer Simpson, of course — to become an astronaut and launching him into space. Early in the episode, when the NASA scientists are brainstorming about how to excite the public about space travel again, one of them suggests they finally reveal that every chimp who travelled to space returned with super intelligence. Pan over to a chimpanzee sitting in a high-back executive chair, holding a smoking pipe. With a clipped British accent the chimp says, “No, I don’t think we’ll be telling them that.” Then the super-intelligent chimpanzee roller skates out the door while making monkey noises.

Homer’s space journey is one disaster after another. He opens a bag of chips, which (in a highly relatable moment) fly everywhere. To the tune of Strauss’ Blue Danube (in the vein of 2001:A Space Odyssey) Homer helpfully gobbles the floating chips, but while doing so crashes into a colony of ants.

The astronauts (including Buzz Aldrin, voicing himself) decide to solve the problem by venting the ants and potato chips into space, but Homer forgets to fasten his seatbelt. He’s about to be sucked into space, then grabs the handle to the shuttle door, breaking it. The astronauts pull him inside while saying, “If I go, I’m taking you to hell with me.” Homer breaks the carbon rod off the inside of the ship to fight back, but when he swings it, the rod gets stuck in the broken door handle, sealing it closed. Once they safely return to Earth, the inanimate carbon rod is hailed as a hero, complete with a ticker tape parade and a Time magazine cover proclaiming, “In Rod We Trust.” Although another inanimate carbon rod had won the Springfield Nuclear Power Plant’s “Worker of the Week” award earlier in the episode, the rod that’s part of the space shuttle program is clearly the superior of the two.

Season 6, Episode 4 “Itchy and Scratchy Land”
“No, my son is also named Bort.”

At the Itchy and Scratchy Land gift shop, Bart can’t find a souvenir miniature license plate with his name on it. There is, however, a “Bort” license plate — luckily for the boy Bart’s age who begs his mom to buy it for him. She refuses, saying, “Come along Bort.” An adult man, also apparently named Bort, turns and pipes up, “Were you talking to me?” Bort’s mom replies, “No my son is also named Bort.”

Later in the episode, we peek inside the Itchy and Scratchy Land control room and hear a technician sending out an alert that the gift shop has improbably run out of Bort license plates.

Season 6, Episode 22 “‘Round Springfield”
“So I’ve been playing an umbrella for 30 years?”

Season 5, Episode 17 “Bart Gets an Elephant”
“Looks like those clowns in Congress did it again! What a bunch of clowns.”

Bart wins a KBBL radio contest and is offered either $10,000, or an elephant. After Bart chooses the elephant over the objections of the disk jockeys, the station manager calls them into her office to demonstrate how easily they can be replaced by a robot unless they get Bart the elephant he was promised. This robot, the DJ 3000, offers “three distinct varieties of inane chatter” and is pre-programmed with perennial apolitical jokes like, “Looks like those clowns in Congress did it again! What a bunch of clowns.” “How’s it keep up with the news like that?” one DJ wonders out loud.

You have to sympathize with this beleaguered young woman. When she signed up to become a model, she surely wasn’t hoping the job meant listening to every guy at the Springfield Auto Show make the same, predictable dad joke all day long. Homer walks up to the model leaning on a car, fills out the form to enter the giveaway and asks, “Do you come with the car?” The truly amazing feat is how she gamely stifles what must be an overwhelming urge to roll her eyes, and instead replies with a smile and a flirtatious laugh, “Oh, you!”

Then the next guy comes up and asks, “Do you come with the car?” and she repeats her canned response. Think of that the next time you feel the urge to make an exceedingly obvious joke to a restaurant server, bartender, or retail worker. Even if it sounds like they’re laughing at your clever remark, that’s only because it’s their job to keep you happy.

At the poorly-attended funeral of saxophonist Bleeding Gums Murphy, Lisa declares, “I won’t rest until all of Springfield knows the name Bleeding Gums Murphy!” Homer responds with, “And I won’t rest until I’ve gotten a hot dog!” Marge tries to remind him that he’s in a cemetery, but suddenly the Hot Dog Vendor appears, shouting, “Hot dogs! Get your hot dogs here!” Marge asks sarcastically if he always follows Homer around. The Vendor replies, “Lady, he’s putting my kids through college.”

Man Who Has Been Hiccuping for 45 Years

Season 4, Episode 6 “Itchy and Scratchy the Movie”
“Kill me.”

Just try to push the nightmare of permanent, uncontrollable throat convulsions out of your mind (it can happen) any time you’re suddenly overcome with a bout of hiccups.