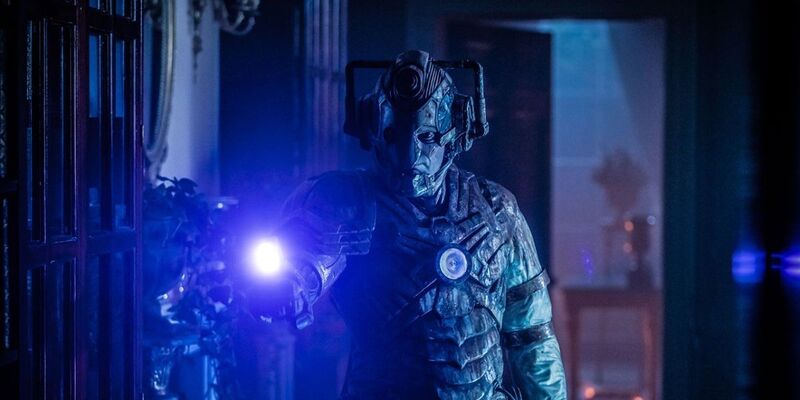 ‘Doctor Who’: Do Lone Cybermen Dream of Electric Sheep?

The Cybermen are some of the most dangerous creatures the Doctor has ever encountered. They’re up there with the Daleks and, as the Doctor says, they’re always somewhere… waiting.

Viewers have been waiting patiently for their return too. Unlike his previous series, showrunner Chris Chibnall’s Doctor Who Series 12 has rewarded fans of the show with many treats and nods to the past, and the latest adventure, with a distinctly new type of Cyberman, is very satisfying for long-term fans. And it’s not over yet… as there are more Cybermen to come in the two-part finale.

Like the Daleks, the Cybermen are responsible for the success of Doctor Who. Easy to imitate and with (usually) easy-to-grasp plans of conversion, mass destruction and/or general badness, they are the perfect enemy for the Doctor. Therefore, the appearance of the Lone Cyberman in “The Haunting of Villa Diodati”  is an extremely welcome addition to the current incarnation of the show.

Earlier this series, in “Fugitive of the Judoon“, the Doctor’s old friend Captain Jack Harkness popped up unexpectedly and left a brief message with companions Yaz, Ryan and Graham. Jack told them to warn their mutual friend of a Lone Cyberman and to not give it what it wants at all costs.

In the latest episode, set on a dark and stormy night in 1816 on the shores of Lake Geneva, the time travellers get to meet this Lone Cyberman — alongside literary greats the Shelleys and Lord Byron, and friends.

Who is the Lone Cyberman?

For starters, he’s got a name – Ashad. In the first-ever Cyberman story (“The Tenth Planet“, 1966), although never mentioned on screen, the Cybermen also had names. Krang, Krail, Talon, Shav, Jarl and Gern all get credited in the closing titles of this early Cyber tale.

Ashad is an unfinished Cyberman and therefore acts very differently to the Cyber creatures seen previously in Doctor Who. He’s battle-scarred, looks rusty and, perhaps most chilling of all, we can see part of his angry, pale, humanoid face — complete with metallic teeth — beneath the normally enclosed Cyber helmet.

Cybermen believe in upgrading human life into powerful cyborg creatures like themselves. It’s their raison d’être. This new Cyberman looks like he’s had some of his organs surgically replaced but is missing the vital emotional inhibitor that suppresses all human emotions. Horribly, this Cyberman can feel things. Why he’s not completely converted isn’t revealed in “The Haunting of Villa Diodati”. Perhaps the Cyber race in the future has run out of spare parts in their war – right now, who knows? Hopefully, we’ll get answers in the series finale.

When we first meet Ashad, he’s having a bad day, or rather, bad night. He’s angry and looking for the Cyberium – a silvery liquid database containing the knowledge and future history of all Cybermen. Someone – who, we don’t know yet – has sent it back in time in an attempt to change the future.

Throughout the episode, this Cyberman is full of rage. He roars and screams at the Doctor and her friends. He also laughs at the humans. The young Mary Shelley appears to calm him when she mentions his children, and for a moment he seems to be showing some regret and remorse, even some tenderness…

But not for long. He shocks his horrified audience by telling them how he slit the throats of his children when they joined the resistance. Even by Cyberman standards, he’s not the best Cyber Daddy, that’s for sure.

Ascension of the Cybermen

Although Jack’s warning couldn’t have been clearer, the Doctor doesn’t listen and she gives the Lone Cyberman the Cyberium. But, in fairness, what else could she do? It is either that or the end of Percy Bysshe Shelley, a brilliant poet who has absorbed the precious Cyber database by accident and who should go on to inspire the world with his words. It could possibly mean the end of life on Earth too.

Taking the Cyberium, Ashad then heads back to future to an empire of evil in ruins, but now armed with all the Cyber knowledge he needs. Luckily the TARDIS isn’t far behind. The Doctor and her friends are following him there so they can protect the last of the human race in the next episode, “Ascension of the Cybermen”.

The Stuff That Dreams are Made of?

This Cyberman is a brilliant creation – and a much better way to bring back an old enemy than the DIY Dalek seen in “Resolution” (2019). The Lone Cyberman is a horrific monster – ‘a modern Prometheus’ – and because of his time-hopping trip back to 19th century Earth, we now know he inspires Mary Shelly to write Gothic classic, Frankenstein. Nice one, Ashad.

So does an unfinished Lone Cyberman dream of electric sheep? Without an emotional inhibitor to calm his mind, the answer is probably yes. And future Cyber wars, no doubt — now he has the Cyberium. And, let’s face it, if the Lone Cyberman inspired Mary Shelley, he probably also influenced Philip K Dick at some point in time too.

But forget sweet dreams – this creature is the stuff of nightmares, and can go straight into the scary Doctor Who monster file. With talk of killing his children and the way that he casually disposes of several occupants of Villa Diodati, Ashad will have scared and unnerved younger viewers, too – as is traditional with Doctor Who — giving that characteristic behind-the-sofa feel to the story.

Timeline of the Cybermen

The introduction of a Lone Cybermen into Doctor Who lore is an interesting take on Cyber kind, and moves the Cybermen forward in terms of the show’s mythology. Since the early years of the show, these monstrous creations have appeared in over 20 stories. Read on for a brief journey through their history, and an at-a-glance look at how they’ve evolved over the years.

The Cybermen’s first appearance in Doctor Who coincided with the last story of the First Doctor (played by William Hartnell). The cloth-face monsters with human hands visit our planet with a simple mission – to take humans home to Mondas and convert them.

When they return to Doctor Who a year later, the appearance of the Cybermen is dramatically upgraded. In this story, the Cybermen are poisoning inhabitants of a moonbase. This is the first of four Cyberman stories for the Second Doctor (played by Patrick Troughton).

Although the monsters were thought to be long dead, the Doctor, his friends and a crew of archaeologists manage to defrost a load of Cyber creatures on the planet Telos.

Updated Cybermen, now with tear-drop eye holes, attack a futuristic space station and plan to use it for a Cyber invasion.

This episode ushered in another new look for the Cybermen. In this story, their armies are hiding on Earth, waiting for the right time to invade. The episode marks the final time we’d see the Second Doctor face his tin-encased nemeses.

After a long rest from our screens, the Fourth Doctor (played by Tom Baker) discovers Cybermen who are planning to destroy a planet made of gold, because they are allergic to it.

There were shocks for everyone when these new-look Cybermen surprised viewers at the end of the first episode featuring the Fifth Doctor (played by Peter Davison). They planned to destroy Earth. Bigger shocks for all when companion Adric dies trying to stop them (especially for Adric).

Groups of the silver menaces get caught up in a deadly Time Lord game on Gallifrey in this multi-Doctor anniversary tale.

The Sixth Doctor (played by Colin Baker) meets the Cybermen in the sewers of London, where they are planning to change the course of history to benefit the Cyber race. And you thought they couldn’t get any more dastardly…

Three years after their last appearance, the Cybermen and the Seventh Doctor (played by Sylvester McCoy) try to track down an all-powerful statue.

Under Russell T Davies’ watch, we get a dramatic new look and alternative genesis story for the Cybermen on a parallel Earth – with the promise of upgrades for all. This new era was helmed by David Tennant’s Tenth Doctor.

Breaking through from their parallel world ­– these new Cybermen get everywhere. And even meet the Daleks! They are partly responsible for the Tenth Doctor losing Rose Tyler too. (Sob.)

The Tenth Doctor goes up against Cybermen plotting to build a CyberKing in a snowy 1850s’ London.

The Eleventh Doctor (played by Matt Smith) runs into the Cybermen when they join forces with loads of other evils to trap him.

Cybermen make a brief appearance and incur the wrath of the Doctor’s companion, Rory (played by Arthur Darvill).

In this episode, Matt Smith’s Doctor discovers a spaceship under a shop in Colchester holding a Cyber secret.

A hidden army of Cybermen appears in an alien theme park and turns the Doctor into a Cyber-Planner. The episode marks another major upgrade for the creatures.

A primitive-looking Wooden Cyberman appears in the Siege of Trenzalore. Very low tech.

The Twelfth Doctor (played by Peter Capaldi) meets another old enemy – the Master – who is helping create a new race of Cybermen made up of the dead, including Clara’s boyfriend, Danny. Nice.

An origins of the Cybermen story – and the casualties are high, this time including the lovable Bill Potts who gets turned into an early Cyberman.

In episode 8 of the latest series, we meet Ashad, the Lone Cyberman – an angry, bitter Cyberman who isn’t fully converted. The two-part finale of the current series looks set to explore his origins, and motives, further.

Ascension of the Cybermen /The Timeless Children (2020)

Set in the aftermath of the Great CyberWar. Can the Doctor protect the last of the human race from the Cybermen? Hopefully the answer is yes.