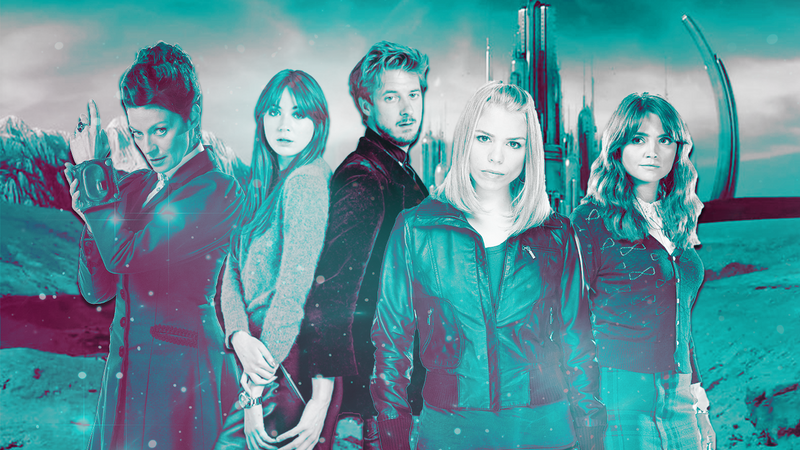 Beyond ‘Doctor Who’: Spin-Offs We Want To See

Doctor Who has introduced us to many fantastic characters and settings during decades of time travel and exploring the universe. Often the stories of these characters and worlds leave the audience wanting more and, across the years, several successful Doctor Who spin-off series have made it onto our screens.

As far back as the mid-1960s, spin-off shows were suggested. Back when the Daleks were everywhere and at the height of their popularity, without luck, their creator Terry Nation tried to get an American-produced series with his audience-pleasing monsters off the ground.

After Doctor Who returned in 2005, there was mention of a Young Doctor Who series which would take us back to explore the Doctor’s life as a child. Something as revealing and important as this to the Doctor Who legacy was abandoned quite quickly, with the idea of a young Doctor never really explored until the “The Timeless Children”.

What makes a good spin-off?

To work, a spin-off series must be faithful to the original characters and worlds where we first encountered them. Production values also play a big part in their success and they need to be similar enough to their original worlds to be credible. Also, any new adventures definitely can’t break any of the rules from the history of Doctor Who.

To maintain interest and for them to succeed in the eyes of Doctor Who fans, you have to believe that the Doctor and the TARDIS could drop in on these spin-off series at any moment and not look out of place – and this has worked successfully several times so far.

To date, there have been just five spin off shows created on the back of the Doctor’s adventures.

And that’s it, so far – with no current spin-off shows in production. However, with nearly 300 stories featuring some brilliant ideas, characters and worlds left behind by the Doctor – surely there are loads of other potential ideas for spin-off series? But where to start? There are endless pairings of characters from such a rich history to draw from. As we revisit Doctor Who companion Rose Tyler on the occasion of the 15th anniversary of the show’s return to the big screen, here are some suggestions for new stories from the worlds of Doctor Who that we think would make great spin-off shows, with input from members of Fandom’s TARDIS community.

The Adventures of Sally Sparrow

First seen in the Doctor Who episode “Blink” (2007), the character of Sally Sparrow (played by Carey Mulligan) is just too great to be left inside the confines of that one story. The fact that the character carries the episode successfully without the Doctor or a companion, shows us how a full series with Sally and her boyfriend Larry might work.

On Earth, without help or intervention by UNIT, Torchwood or the Doctor, Sally could ably run into new threats and menaces and logically and calmly work out how to get rid of them like she did in her only Doctor Who story. Of course, in a season finale, with a menace too great for Sally – let’s say the Daleks – she might need the help of an old friend. Enter the Doctor, now with a different face and played by Jodie Whittaker, who remembers Sally well and who might even persuade Sally and Larry to join her in the TARDIS – after she convinces them both that she is the same person they had briefly met before, of course.

The Nestene on Earth

As fans discovered after the global rewatch of Doctor Who’s “Rose” last week, writer Russell T Davies had prepared a special lockdown treat for us all with “Revenge of the Nestene”. This sequel to “Rose” begins in the aftermath of the episode where we discover that a piece of the Nestene survived the Doctor’s anti-plastic attack.

Without spoiling this for you, the story goes on to reveal that the Nestene now plays an important part in our day-to-day life – more than you might have believed possible. Surely this could lead to an interesting spin-off show focussing around the Nestene plans to take over the Earth and get revenge on the Doctor?

First seen in “The Timeless Children”, the Division is a special group of Time Lords set up on Gallifrey. While we all know that Time Lords adopt a strict policy of non-intervention, it turns out the Division sits outside this and actively gets involved when necessary. Their full story remains untold – most of it hidden from the Matrix to protect someone or something.

“[I’d like to see] a spin-off involving the Ruth Doctor, with a focus on The Division.” — Fandom TARDIS community member, TheDarkBomber

Other Time Lords breaking the rules would be an interesting series and how fascinating to explore the consequences of this as it expands the world of Doctor Who.

Since the last series of Doctor Who, it’s now an established fact that there have been countless Doctors before all the official ones that we already know and love. This could open up a whole range of adventures exploring the Doctor Who myth.

We could have one-off stories featuring a ‘Doctor of the week’, giving a whole range of actors the chance to play the role. Just think about it – this could run and run, with endless stories for different Doctors paired up with guest friends travelling with the Doctor.

Failing that, let’s just have a full spin-off series with the amazing Jo Martin as the Doctor, first seen in “Fugitive of the Judoon”. Her performance and that TARDIS is too good to waste on just a couple of outings in the series so far.

Speaking of cool TARDISes, Clara and Ashildr also have their own one. At the end of “Hell Bent”(2015), this pair make off in a time machine stuck in the shape of an American diner – ready for all sorts of adventures.

Clara knows that her fate is sealed and the universe is depending on her death, so she accepts that there is a time limit on her journeying. Rather grimly, she knows that she must return to Gallifrey one day so that the universe can stay on track and for the Time Lords to return her to the street where she must die – but as she says, we all have to face death at some point so she’s not scared and believes they can have a few adventures on the way back to Gallifrey. Brave and limited as that may be, it definitely opens up the possibility of an exciting spin-off series.

“I would LOVE to see what happened to Clara and “Me” because Clara’s just one heartbeat away from death and Me can’t die. Plus they stole a TARDIS so I’d love to see what they’ve been doing.” — TARDIS community member, ADragonAppears

Between them, they both have a sound knowledge of time travel and different worlds and cultures, so they would be perfectly matched as adventurers and travelling companions. Hopefully, to save the universe, she will get back to a point in Gallifrey’s history before the Master destroyed it, otherwise the universe is in trouble. Again.

At home with the Chestertons

In “The Chase” (1965), the original time-travelling school teachers Barbara Wright and Ian Chesterton finally got home to London after an adventure with the Daleks. But what happened next? We’d love to know. Surely settling back into teaching history and science at Coal Hill School might be a bit difficult – plus, how do they explain their disappearance?

An episode of the spin-off series The Sarah Jane Adventures explains that the pair married and are now professors living in Cambridge, and strangely haven’t aged since the 1960s. Now there’s a story to explore. Think classic British 1980s’ sitcom Terry and June crossed with Torchwood…

Susan Foreman in the 22nd century

Left outside the TARDIS in “The Dalek Invasion of Earth” (1964) with only one shoe and on a Dalek-ravaged Earth, what happened to young Susan Foreman? How did she begin her new life with David Campbell? That’s surely a series that could be explored. We know that she survived and made the best of things, as we see Susan again in “The Five Doctors” (1983), but there’s a whole load of unknown stories to tell between those adventures.

Also, since she’s presumably a Time Lord like her grandfather, we can also see Susan regenerating when the lead actress wants to move on too.

Margaret and the Slitheen

The gas-exchanging Slitheen family from Raxacoricofallapatorius made a huge impact in the 2005 story “Aliens of London”. ‘Margaret’ Slitheen, played perfectly by Annette Badland, made an interesting and complex villain – and she made a welcome return to play the role again later in that same series in “Boom Town”.

“I think maybe it’d be cool to have a kind of anthology/documentary series going to different planets and exploring different races. Like, one episode with the Slitheen, another with the Sontarans, etc. The plots of the episodes could help us better understand how their societies work.” — Fandom TARDIS community member, Notarealcannon

Although we see her regressed to an egg at the end of that story, wouldn’t it be fun to find out what she got up to in Cardiff in the months leading up to “Boom Town”? You can imagine all sorts of mischief as she sets herself up as new mayor of the city…

What do YOU think?

We turned to you, the Fandom community, for your ideas on what would make good spin-off shows, and we got some amazing suggestions. Here are some of our favourites.

Adventures in time and audio

As well as regular adventures with past Doctors and companions, the masters of award-winning audio drama, Big Finish Productions, also see the potential in reuniting characters, monsters and settings for an ever-increasing range of audio adventures without the Doctor. Since the late 1990s, the company has successfully created an impressive range of new and exciting adventures that take us to worlds beyond Doctor Who.

The range of their spin-off series is vast and includes:

“It would be amazing to see a spin off of the doctor and the master growing up in gallifrey! their friendship is so fascinating it would be awesome to see them as best friends and watch as they slowly become enemies!!” — Fandom TARDIS community member, SuperWhoLock11

“I think a Missy spinoff would be amazing to do. Missy has had other adventures either before she met Capaldi’s doctor or during his tenure. For example we could see adventures from the missy chronicles book or the missy audio dramas plus others like how she escaped Skaro and what her “very clever idea” was.” — Fandom TARDIS community member, Talon1105

It’s a huge and diverse range of adventures that’s definitely worth diving into. And there are more to come.

Stepping stones to other worlds

As the successful spin-off television series, the Big Finish audios and the Fandom community highlight, there are endless possibilities for shows that expand on the story of Doctor Who. Like the TARDIS, there is potential to go anywhere and while we wait for the series to return, it’s always fun to speculate on what could be and what would work.

“It could be interesting to see Amy and Rory in 20th century New York.” — Fandom TARDIS community member, Elib876

Spin-off stories build on our enjoyment of the series we love and allow us back into the lives and worlds of characters we thought we’d never see again. When done well, they allow us to catch-up with old friends, move their stories on, and let us remember why we enjoyed being in their company in the first place.

It’s a big universe, with lots of stories still to be told. It can’t be long until another spin-off series appears based on the many worlds of Doctor Who.