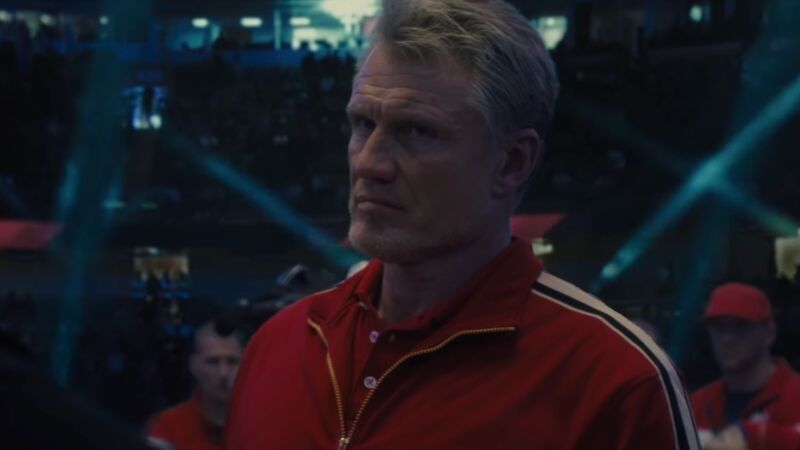 Exclusive: ‘Creed 2’ Star Dolph Lundgren Was Worried Drago Would Be a Joke

Three years after the runaway success of Creed, the seventh entry into the Rocky franchise which focused on the ascension of Adonis Creed (Michael B. Jordan), son of Apollo, as he rose to prominence under the tutelage of the legendary Rocky Balboa (Sylvester Stallone), a sequel was inevitable and today sees the UK release of Creed II.

In the follow-up, Stephen Caple Jnr (Grown-ish) takes the directorial reins from Ryan Coogler, who is busy in Wakanda, and brings to the fore a rematch between Creed and Drago for a new generation. In Rocky IV, Apollo Creed was killed in the ring by Russian heavyweight Ivan Drago (Dolph Lundgren), and now 30 years on, his son Viktor (Florian Munteanu) vows to take the heavyweight crown from Adonis — in his own backyard.

To celebrate the anticipated release, we sat down with Lundgren to discuss the sequel and returning to the franchise, and while he was nervous at first about reprising his role, his fears were allayed once he read the script.

“Well you have to reinvent the guy,” said Lundgren. “Obviously in this case, it was 30 years later so a lot has happened to me and a lot has happened to him (Drago), and in the screenplay there was an indication of him having lost respect. He lost his country and his wife – he has a lot of problems. And then I add on some of my own problems from my life. So once I read the script it was about: ‘How do I make this guy real?’ There were nerves before I read the script about whether playing the character again… are people going to accept me? Is it just going to be a joke and one-dimensional? But thankfully Stephen wasn’t interested in cliches and for me, this has been one of the top two or three experiences of my whole career.”

Of course, this being a Rocky film, there was always going to be the anticipated reunion between Balboa and Drago. But rather than taking place in the ring again (both men are retired, of course), it unfolds in Rocky’s restaurant — and is one of the most powerful, and indeed heartbreaking, moments of the film, with Lundgren delighted the duo got to finally do a dramatic scene together outside of the ring and the crazy world of The Expendables series.

“Well, this is like a real movie, it’s not just jokes and gunplay!” said Lundgren. “Plus, they were on the same side; here we are on opposite sides. That was my favourite scene in the script and I was very protective of that scene – it was actually the last scene I shot. Stallone, of course, was changing his mind about what day to shoot and I didn’t like the rewrites they did on it. I liked it the way it was originally so we went back to the original version. So we argued about that and then he said something in typical Stallone fashion: ‘Can we shoot this f—ing thing now and stop talking about it?!’ There was a certain energy between us as we had never done a dramatic scene together so it was fun and challenging and kind of liberating.”

Key to the dynamics of the film is the relationship between Ivan and his son Viktor, who has picked up the boxing baton in the family after Ivan’s defeat in 1985. In the 30 years since, much has changed but the love of boxing and the desire to be the best has seen them through some tough times during those three decades. Newcomer Florian Munteanu plays his son and Lundgren says that the two got on swimmingly, which helped both of them to dig deep into the emotional side of the story with ease — despite Munteanu having little acting experience.

“We got along immediately, did Russian lessons together — and with all these heavy scenes we would have to do, I wanted to get close to him as we have to like each other rather than not,” explains Lundgren. “If you hate the other actor then it doesn’t work. The real emotion has to be really positive, which it was, and you have to act out the other stuff. He did a great job and I was very impressed with him.”

Lundgren has become one of action cinema’s most prominent figures, starring in over 80 films since his debut in Rocky IV. But that hasn’t stopped him keeping an eye on his old buddy Stallone and the journey of Balboa through the subsequent films — including the first Creed which Lundgren thinks is on a par with the original.

“I don’t think I saw Rocky V but Rocky Balboa I did and liked parts of it. [There are] some really good bits,” he says. “And I went to the opening of Creed not knowing really what it was apart from it being something to do with Rocky… But two new guys come along, Michael and (Ryan) Coogler, and reinvent the whole franchise and it was tremendous, and was as good as Rocky – maybe not as ‘classic’ but definitely as just as good.”

Stay tuned for Part II of our interview with Lundgren as we chat to him about another of his most iconic roles: He-Man in 1987’s cult classic Masters of the Universe.

Creed II is out now in the UK, US and Australia.