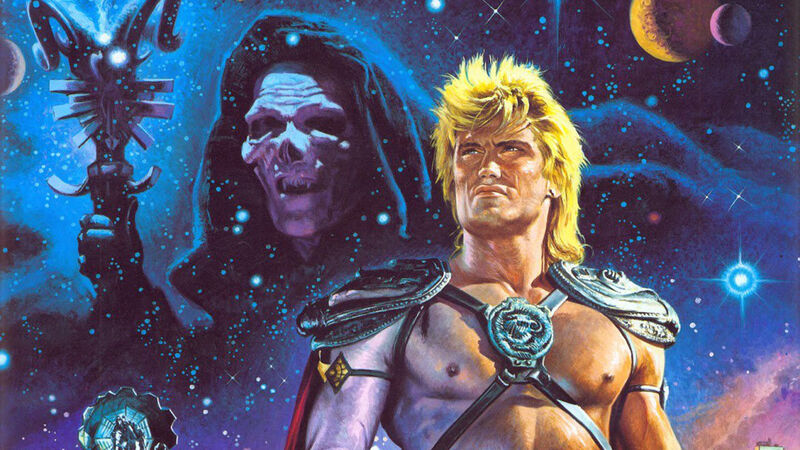 With Creed II now out in cinemas and Aquaman not far behind, former He-Man, Dolph Lundgren, is enjoying something of a renaissance. Not that he has been away from the movie scene, mind you, but with two big blockbuster movies in such a short space of time, he is firmly back in the limelight.

After the success of Rocky IV in 1985, the Swedish actor was thrust into his first starring role as the Prince of Eternia in the live-action version of Masters of the Universe. Back in the early 1980s, He-Man, Skeletor and chums were big business and in 1987 they made the leap to the big screen. Despite a hefty budget, the film was a box-office flop but has gained a huge cult following in the three decades since…

Film’s Creators “Had a Heart Attack”

Playing an American icon didn’t come easy for Lundgren given that his acting career was still in its infancy. He found the going tough. Indeed, when the first dailies from the film reached executives at Mattel – the creators of He-Man – they “just about had a heart attack!” His accent and grasp of English worried them, and they almost dubbed his voice before release. He stuck with it but admits it was a pressured role.

“I remember myself as a young kid, who had just been in this huge hit playing a Soviet bad guy, now suddenly having to play He-Man, this American hero and icon,” he says. “It kind of did a number on me. I was super nervous and under a lot of pressure — and with those long night shoots as well!”

Masters of the Universe set a record for the longest run of night shoots on any one film, with a reported 54 days of shooting.

Collapse of an Empire

Made for $22 million by Cannon Films, led by founders Menahem Golan and Yorum Globus, they saw huge potential in Masters of the Universe and a possible franchise, but during production the company was beset with financial problems and the set was fraught, with the crews not being paid on time and big chunks of the film being scrapped and truncated, including the big fight sequence in the film’s finale which almost wasn’t filmed.

“Cannon had a lot of financial problems, lots of things had to be changed and the script was chopped and things cut out,” remembers Lundgren. “We were caught up in this storm over at Cannon and I was starring in their biggest budget film and of course, the company was melting down underneath our feet whilst we were making it.”

Despite the failure of the film, a second part went into pre-production with director Albert Pyun attached to direct a lower-budget version without Lundgren, Langella et al. But when Cannon collapsed, Pyun turned the script into Cyborg, the 1989 actioner starring Jean-Claude Van Damme.

I DARE ANYTHING, I AM SKELETOR!

No matter what you think of the film, there is one element that is almost unanimously admired: the performance of Frank Langella as Skeletor. It’s got to be one of the most underappreciated of all time. He sits somewhere outside Darth Vader, The Joker, Thanos and Hannibal Lecter, which, when you consider how goofy the cartoon version of the character was, says all you need to know about Langella’s performance. Indeed, the actor himself says it’s still one of his favourite parts of his career.

Lundgren says he was wowed by his performance.

“I really looked up to him and I was very respectful of him,” he says. “But I realised how good he was and what a great job he did because he was buried under these latex sheets that were glued onto his face and yet he could express all of these emotions and anger. He was always so nice, too.”

WHERE IS THE REMAKE/REBOOT?

Surprisingly, this film remains the only live-action version of the characters – though not for the want of trying. And that’s excluding a series of UK television ads in which the characters appear. Over the years filmmakers such as John Woo, John M. Chu, McG and David S. Goyer have tried and failed to bring He-Man and co. back to the big screen with a 21st-century makeover. Sony now has the rights (and still have the film “primed” for a Christmas 2019 release), but given the lure of superheroes, comic books and fantasy stories in modern cinema, Lundgren is as shocked as anyone that a remake hasn’t yet emerged, especially as he would like to be in it.

“Yeah, I’m very surprised. I heard about it about ten years ago when one of the big studios was working on it,” he said. “I actually met the writer, by the way. We had a dinner and he asked me if I would want to be in the picture and I said, ‘Sure!’ If they thought of something good, then great. Then that went under and someone else came in, then I heard Channing Tatum was gonna play He-Man at some point – this was maybe five years ago – and now I just heard that someone else is attached to it. Channing would be great. I met him on Hail, Caesar when I did a little submarine sequence [which was eventually cut out]. He would be good, he’s a cool guy.”

As for a director, what about James Wan, who helmed Aquaman? After all, he is a self-confessed fan of the original film.

“When I was hired for Aquaman, James Wan told me he was a huge Masters fan when he was a kid, he had the sword and everything. And when he was casting King Nereus he thought of He-Man, and he thought of me so having done Masters kind of got me the role in that film.”

Despite all the issues with the film, there are many that still hold a special place for it in their hearts. In the UK, for example, it was reportedly one of the biggest video rentals of 1988 and its cult following has grown so much that many fans are still clamouring for a special Blu-ray release from an independent distributor. Sadly, the likelihood of that is very slim. Over the years, Lundgren has reportedly distanced himself from the film but he put the record straight and said he still holds the film close to his heart.

“I look back at it very fondly. I know there has been some speculation in the press that I didn’t like it – maybe I said that when I was 32 or something – but I do have huge fondness for it,” he said. “I’ve caught the film since many times and it’s such a sweet, alluring movie. It’s flawed in some ways but its very watchable. I like the story, the fact that they came to Earth and they to make it back to Eternia. I think that was all cool.”

Whatever happens to future incarnations of the characters, the 1987 version has a charm to it that can never be recaptured. And despite all the problems it was beset with, director Gary Goddard and his crew managed to pull out one of the gems of ’80s sci-fi/fantasy cinema. Albeit one that wasn’t appreciated in its time.