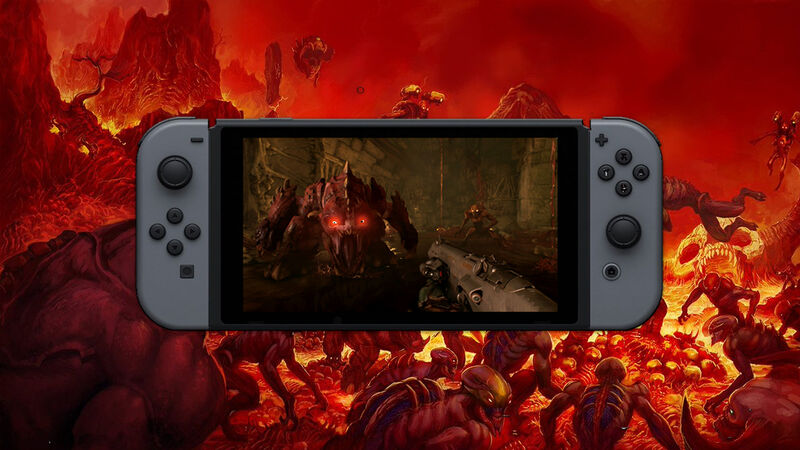 ‘DOOM’ On Nintendo Switch Is A Blisteringly-Brilliant Portable Shooter

Of all the third-party releases we hoped would grace Nintendo’s shiny new console, Bethesda’s gore-soaked DOOM reboot wasn’t a port we even dared to dream about. While we fell in love with it last year on other platforms, this adrenaline-pumping murder-fest seemed a bit at odds with Nintendo’s squeaky-clean family image. Not only that, but after turning heads on PS4 and Xbox One, it  also looked to be far too technically demanding for the tablet-sized Switch.

Yet, despite all the sizeable odds stacked against its existence, today sees DOOM blasting its way back onto Nintendo hardware for the first time in two decades. But with ID’s latest already wowing on PS4 and Xbox One, does this late Switch release run like a portable FPS dream, or a badly ported nightmare?

It’s time to rest easy Nintendo fans, because DOOM on Switch is the real deal.

While many gamers were expecting this port to be missing features left right and centre, impressively, developer Panic Button has managed to cram the full DOOM experience onto Switch. For once, Nintendo gamers get all the game’s existing DLC, the recently added Arcade Mode and even the fully updated online multiplayer suite. In other words, this is DOOM 2016 through and through.

As you’d probably expect, however, shrinking this impressive package down for a handheld has come at a cost. With the tiny Switch console obviously lacking the horsepower of the fully-sized PS4 or Xbox One, DOOM’s framerate has been halved in order to squeeze it onto Nintendo’s system.

Employing a dynamic resolution, DOOM on Switch constantly changes its pixel count in order to keep the frame rate running at a rock-solid 30 frames per second. While in quieter sections DOOM runs at a respectable 720p resolution, busier battles see the game dropping to noticeably blurrier resolutions, helping the Switch keep up with all the on-screen chaos.

While these resolution drops are definitely less severe when playing in docked mode, DOOM on Switch isn’t exactly a looker on the big screen. Although docked DOOM certainly stays closer to its target resolution, after coming from the sharp 1080p presentation of the PS4 version, this ports muddy textures don’t paint a particularly flattering picture on the TV. It’s still perfectly playable and not an eye-burning monstrosity, but given the majesty of Switch games like Breath Of The Wild and Mario Kart 8: Deluxe, DOOM’s muddier visuals are a bit of a shock to the system.

Thankfully though, this is an experience that fares far, far better on the go. As anyone who played the original release might remember, DOOM ran at a lightning-fast 60 frames per second on other platforms. On paper then, having DOOM running at half the frame rate sounds like a disaster. Thanks to the game’s aggressive use of motion blur, however, the action still feels surprisingly fast-paced on Nintendo’s platform.

With past handheld gaming devices marred by a combination of a lack of power and their fiddly control layouts, those who play on the go have found themselves stuck with sub-par shooters. With Nintendo’s latest, there are no such annoying  limitations. Playing DOOM on the Switch feels just as good as you’d hope a shooter would on a handheld. Thanks to the system’s solid dual analogue stick layout and its impressive specs (for a handheld), DOOM on Switch is easily the best portable shooter we’ve ever played.

Gamers will probably want to whack up the camera sensitivity, however, as the default settings are set to shockingly low movement speeds.

Multiplayer On The Move

It’s not just the controls that impress on Bethesda’s Switch debut though.  Somehow, DOOM’s online multiplayer has not only made the transition to Nintendo’s new platform intact, but it also features the best online experience on Switch to date.

Not only have all the matches we’ve played run flawlessly both in handheld and docked mode, but the developer has also thoughtfully created its own in-game invite system. Upon booting DOOM, a quick tap of the ‘Y’ button opens up a little online tab, allowing players to easily invite any friends to a party and then hop straight into a match.

With Nintendo’s own Splatoon 2 and Mario Kart 8: Deluxe opting for a painfully convoluted lobby system, we were thoroughly impressed by just how smooth online matchmaking felt in DOOM. Take note, Ninty, this is how online multiplayer should work on the Switch.

Is DOOM on Switch Any Good?

Blasting your way through hell on the go is still an experience we can’t quite get over. With FPS games largely being a bit rubbish on portable systems, playing DOOM in all its glory on the train or during a flight has been a bit of a revelation.

Not only is this a port that shows that big-budget AAA games can run well on Switch, but more importantly, DOOM proves that adult-orientated games actually fit the system like a glove.

Still, it’s not a perfect port. For those looking to play DOOM purely on the big screen, the Switch version’s janky visuals make it difficult to recommend. Yet, if you’re looking for a portable version of one of the best shooters in recent memory, DOOM thoroughly deserves to be the blood-soaked outlier lurking in your Switch library.