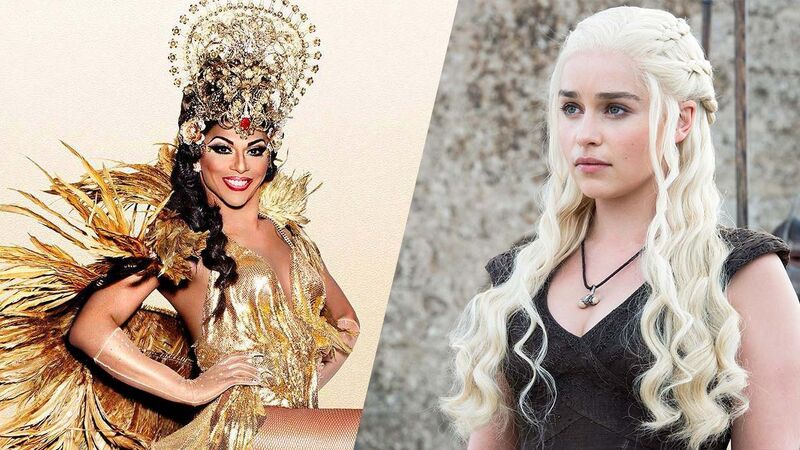 ‘Drag Race’: Which ‘Game of Thrones’ Character Would Each All Star Queen Be?

Throughout the entire season of RuPaul’s Drag Race All Stars, Shangela has been comparing the competition to Game of Thrones. (Perhaps you’ve heard her mention it a time or 12?)

The frontrunner says that when it comes to playing strategically and forming alliances, she wants to emulate Daenerys Targaryen from the hit HBO show. (Think: Mother of Dragons meets Mother of Drag Queens.) Since Shangela already cast herself as Dany, we decided to match up some of the other All Stars queens with their Game of Thrones counterparts.

Winter is coming, so may the best woman win!

When it comes to making the ultimate sacrifice in order to save the ones they love, BenDeLaCreme and Hodor have a lot in common. After winning nearly every challenge this season, DeLa shocked fans by eliminating herself from the competition in order to prevent her sisters from being sent home. Meanwhile, Hodor saved Bran and Meera from a wight attack by holding the door of a cave in order to give them time to escape. The selfless act ultimately ended in him being torn apart by the wights in another moment that fans still haven’t been able to get over.

Underneath the wigs and makeup, Milk is one handsome man. And just like Jaime Lannister, the Dairy Queen may have let those good looks get to her head. Milk’s cocky attitude led to her being the unofficial villain of All Stars 3 as she rubbed the other queens the wrong way with her superiority complex. Meanwhile, the handsome Lannister is known for his arrogant attitude and for bragging about his sword-fighting skills (before his hand was chopped off in Season 3, that is). Despite their occasional bad attitudes, however, both Milk and Jaime are ultimately sensitive souls with big hearts as strong as their jawlines.

When it comes to ruling the world of wisecracks and one-liners, Trixie Mattel and Tyrion Lannister are cut from the same comical cloth. They also happen to know a thing or two about disappointing others. Tyrion grew up as the outcast of the Lannister family due to his short stature. Just as the dwarf was never able to win the approval of his relatives, Trixie has had a hard time winning the approval of RuPaul and the judges. Skating into the workroom as a frontrunner of the season, the comedy queen eventually worried she was disappointing fans by bombing Snatch Game and failing to land a major win. But despite their flaws, the other thing Trixie and Tyrion have in common is being fan favorites in their respective franchises.

Aja and Arya both know what it’s like to be fighters, despite being underestimated because of their youth. When Aja entered the All Stars competition, many viewers pegged the 23-year-old as the first to be eliminated. Instead, she crushed the first challenge with a jaw-dropping lip sync and a death drop from a platform above the stage. Similarly, Arya is often brushed off as just a young girl, but anyone who has crossed her path quickly learns not to discount her. Instead of serving death drops, Arya is focused on her death list, as she seeks revenge on anyone who has hurt her or her family.

Chi Chi DeVayne and Samwell Tarly may not be the fiercest fighters, but they both are absolutely beloved by fans. Chi Chi struggled to keep up with her sisters on All Stars 3 and seemed to lack the cutthroat attitude that some of the other contestants possess. She seemed more than ready to leave when it was time to be sent home, preferring to focus on her love for drag than on fighting for the crown. Similarly, Sam is a lover, not a fighter, and asked Jon Snow if he could leave the Night’s Watch in order to train as a Maester at The Citadel.