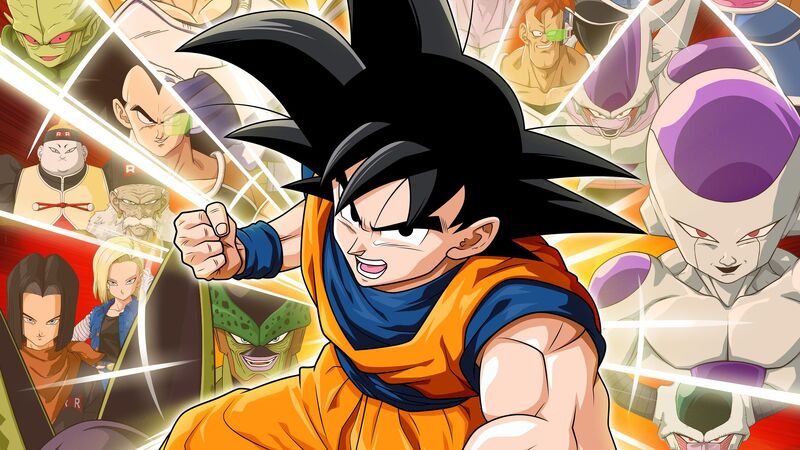 There’s always been something a little magical about Dragon Ball. As a young kid growing up in ‘90s Britain, a lot of our cartoons felt incredibly safe – stereotypically reserved. With Saturday morning kids’ programming showing a mix of English fare like Postman Pat and US Cartoon Network stalwarts, there seemed only ever to be two things on the glowing box – dull TV for grownups or incredibly cutesy cartoons.

Then Funimation’s Dragon Ball Z came along and ki blasted the animated rulebook into oblivion.

Thanks to its charming combination of absurdist martial arts skills, Chinese folklore and er, weirdly pervy humour – these spikey-haired Saiyans captivated childhood me in a way that little else could. Despite its preposterously drawn-out fight scenes, nonsensical filler episodes and references to Japanese food I had never eaten, to 10-year-old me, this strange cartoon was more addictive than a pile of sugar-coated crack.

Every Saturday morning, I’d scoot as close to the TV screen as possible, soaking in each super-powered second with wide-eyed wonder. As my confused parents scratched their heads at (what they saw as) a nonsensical Japanese animation, I found myself completely captivated by its colourful cast of constantly sweating characters.

First came the karate classes. Then came the hoarding of pocket money to save up for increasingly well-detailed action figures, until one day I was importing (awful) Japanese DBZ brawlers from a makeshift game shop at the back of newsagents. The lengths kids’ll go to in order to pull off a virtual Kamehameha.

In other words, I’m quite into Dragon Ball. Like countless other ’90s babies, I’m part of a generation that’s just as wistfully nostalgic for Dragon Ball as ‘80s kids are for Star Wars. Yet, while recent years have seen seemingly every other IP enjoy a gleeful resurgence, I’ve found myself feeling surprisingly lukewarm toward Toriyama’s beloved series.

Why? Because of its middling video game adaptations.

While Game Freak’s consistently brilliant games have kept ‘90s kids devotedly carrying a torch for Pokémon, the last decade has been tough for game-loving Dragon Ball fans. Yet if you’re feeling similarly — don’t worry, there is hope! Against all odds as we usher in a new decade, my love for Dragon Ball has finally returned – and it’s not the all-new Dragon Ball Super I have to thank, it’s Dragon Ball Z: Kakarot.

When Bandai Namco first announced its Z-saga-spanning action RPG, truth be told, it was hard to get all that excited. Having played through the seminal Budokai series, the Tenkaichi Budokai series, and even struggling through the recent Xenoverse games, the idea of pummeling Radditz and spirit bombing Frieza for the 20th time no longer filled me with child-like glee.

Yet, somehow, Kakarot not only lives up to the marketing, but it also does the impossible – it makes the completely rehashed Z saga feel fun again. For arguably the first time in series history, developer Cyberconnect2 has managed to create a virtual experience that simply oozes Dragon Ball charm through every pixel.

So, how did they do it? Speaking to the game’s Producer, Ryosuke Hara, he explains that while most virtual recreations of the Z fighters have doubled down on the flying fists and crater-creating energy blasts, Dragon Ball Z: Kakarot instead focuses on the charming characters that exist on the fringes of Goku and co’s adventures.

“There have been many Dragon Ball games that have focused on the story of Dragon Ball Z,” agrees Hara, “However, with most of those being Fighting games, they focused a lot on the main fights and the most iconic moments and scenes of the anime.”

“In Dragon Ball Z: Kakarot, we wanted to shed more light on the rather minor moments that take place in between the iconic fights. As well as the funnier moments which the author Akira Toriyama is well known for.”

We know what you’re thinking, this all sounds suspiciously like eye-roll-inducing marketing fluff. Yet, once you dive into Bandai Namco’s latest, sure enough, it’s Kakarot’s humour and warmth that immediately stand out.

Known for its work on the Naruto Shippuden series, for Cyberconnect 2’s first-ever Dragon Ball adaptation, they were determined to get it right. Diving into the manga and the anime, Hara explains that it was crucial that they get the little touches right in order to make Kakarot really feel like Dragon Ball.

“We tried to really deepen our knowledge and understanding of the original works of Dragon Ball, in order to deliver the ultimate Goku experience. we’ve put a lot of effort into reproducing the minor stories and characters, the detailed moments… I believe that [even] fans who know the anime will recall scenes that they may have forgotten.”

While we already have something old and something borrowed, Cyberconnect2 also had the benefit of completing the clichéd trifactor – it offered fans something new. Stepping out of the restrictive realms of the fighting genre, setting Dragon Ball Z: Kakarot in a semi-open world allowed the developers to add in a ton of grin-inducing side quests, with new and familiar characters really helping to add a welcome distraction from the well-worn story and even at times, adding new context to familiar fights.

“In the Cell Arc, for example, you can experience a sub-quest that shows the connection between Gohan and Android 16, making Gohan’s awakening to Super Saiyan 2 even more dramatic,” explains Hara, “Sub-quests also feature connections and talks between characters that you wouldn’t see together in the anime. Such as Piccolo and Ox-King.

“Lastly, we received a brand new story and setting from Akira Toriyama — just for this game. And we have used these settings to develop sub-quests as well.”

It’s this focus that has led to one fairly surprising omission for a Dragon Ball game – multiplayer. While pretty much every console Dragon Brawler to date has included some kind of multiplayer, for Dragon Ball Z: Kakarot, Hara explains that its inclusion would simply break the experience:

“The fights in DBZ aren’t always fair: Goku’s adversaries often start with a much higher power level. This dynamic is hard to convey in a PvP fighting game since players need to come to battle on equal footing.

“But,” Hara continues, “since this action RPG has players fighting against the CPU, we’re able to more closely reproduce the fights of the show. The HP, power, and movesets of the game’s major villains can exceed Goku’s capabilities, giving you the feeling that you’re up against truly unstoppable foes.”

Once again, it’s a line that sounds very back of the box’ worthy, but that actually rings true while playing. As the Z warriors’ foes get more intense, players need to pay attention to the level of their character if they want to actually stand a chance of defeating their opponents. Whether it’s stocking up on items, or training until you’ve unlocked enough skills, I was surprised at how much Kakarot demands a focus on more of the stat-based, role-playing side of the experience.

What Can We Expect From Dragon Ball Z: Kakarot’s DLC?

With nostalgia squarely in Bandai Namco’s crosshairs, you can see why  the publisher opted to fund yet another Z game. Yet, ehile Kakarot is undeniably a blast, given Dragon Ball Super‘s massive popularity, it’s surprising that gamers have yet to see a true playable adaptation of Toriyama’s latest. Can we expect a Super specific DLC to make its way to Kakarot?

“Nothing is decided [re: Super DLC] at this point, but of course the doors aren’t closed if we receive requests from fans,” answers Hara. “All we can say about the DLC, for now, is that it includes two classic episodes and one new story.”

With Dragon Ball Z: Kakarot taking 35-40 hours to complete, and data mines suggesting that the upcoming DLC will revolve around the classic DBZ movies, it looks as though, thankfully, this adventure won’t be coming to an end anytime soon. Yet with the Broly focused films largely just being about fists of fury and powering up to mad sick levels, I hope that the upcoming DLC doesn’t just double down on recreating these super-powered showdowns, but also keeps us caring about Toriyama’s wider cast of characters through its charming side quests.

Sure, this game is ultimately a tale about Goku (the clue’s in the name) but it’s the wonderfully cheesy ’90s presentation and unashamedly whacky asides that really make Kakarot feel like its source material. Despite thinking that this franchise no longer had much to offer me, against all the odds, it’s the weird filler content like helping to find Roshi’s dirty mags or taking Goku out on driving lessons that’s made me fall in love with the Z warriors all over again.

While fans have always dreamed of getting an open world Dragon Ball game, this anime-inspired adventure isn’t a success because you can finally fly around Planet Namek collecting orbs. No, Dragon Ball Z: Kakarot succeeds in weaponising nostalgia for one reason: because it embraces what truly makes Dragon Ball, Dragon Ball – it’s unashamed goofiness.

Now if you’ll excuse me, I have some embarrsingly expensive action figures to order.