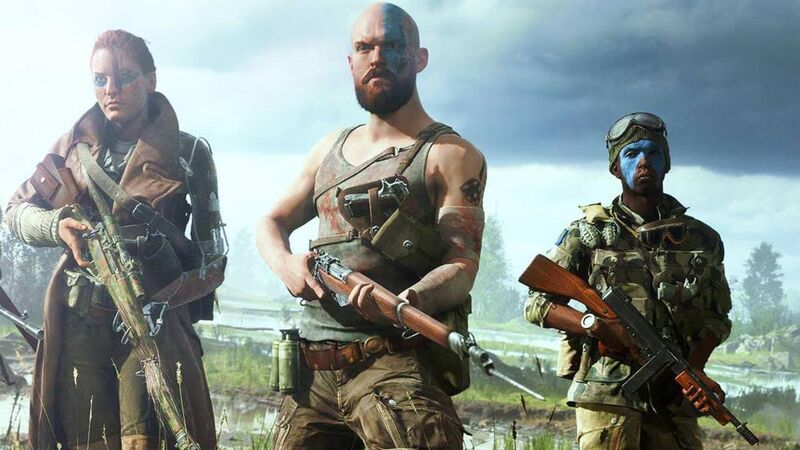 E3 2018 is finally here. Kicking things off today in sunny LA, EA brought its big names out in full force — and gave us a few surprises too. (See the full E3 press conference schedule here.)

Two weeks after its initial reveal, EA finally gave fans their first look at the game’s multiplayer mode. A pulse-pounding trailer showcased a massively improved new destruction engine, revealed a glimpse of its new moveable gunplacements in action, and illustrated exactly what fans can expect from the new player sliding and improved player maneuverability.

It was then confirmed that there will be no loot boxes and no Premium Pass in Battlefield V. Our first look at the game’s story mode will debut at Xbox’s conference on Sunday.

For the first time in FIFA’s history, the prestigious European tournament Champions League is coming to FIFA 19. This famous footie tournament will get its very own authentic tournament mode, will be integrated into the career mode and into The Journey and of course, it will make its way to the ever-popular, Fifa Ultimate Team.

EA is Creating Its Own Netflix-style Game Streaming Service

EA is working on a Cloud-based game streaming service, made by a new EA team based out of Israel. Offering players the ability to stream games to their phone and attach their own controllers or play on a laptop, this surprise announcement certainly turned a few heads.

As long as you have a solid internet connection, the promise is that anyone will be able to easily stream an ever-expanding library of games. Its release is still a way off, but EA has stated that there is a testable build of the series at E3. Expect our impressions soon.

Madden’s coming back to PC

For the first time in a decade, Madden is coming back to PC. Revealed as part of its new subscription service, Origin Access premier, subscribers will have immediate access to 100 games from EA and other publishers.

They will also get early access to Madden 19,  FIFA 19, Battlefield V and Anthem. Curious? Well, you can give it a spin on PC with a free trial this weekend.

It’s time to get excited Star Wars fans, as EA just announced a new single-player Star Wars game. While no screens or clips were shown, during a casual conversation, the game’s producer revealed that Star Wars Jedi: Fallen Order will be set between Episode III and IV. Hinting that players will be put in the shoes of a Sith, the game will be set while the Jedi are being hunted. That’s all we know so far, but with the game coming out holiday 2019, I’m sure we can expect to see more at next year’s E3.

Star Wars: Battlefront 2 may not have had the best year, but DICE is determined to win fans back. A brand new multiplayer sandbox mode will be coming to the game, tasking players with capturing command posts and taking out capital ships. This mode has yet to be given a name. The Clone Wars will be coming to the game too, with iconic prequel-era characters like General Grievous, Count Dooku, and Anakin Skywalker  finally making their way to Battlefront 2.

Unravel 2 Announced — And It’s Out Now

EA’s indie hit is back. The cutesy platformer is getting a sequel, and its out right now. This time the action focuses on co-op, offering more challenging platforming and puzzles. It can, of course, be played by a single player, allowing you to pick up the other player character and run across the environment. A live demo showcased some new fast-paced, danger-filled chase sections, with a bird chasing our poor yarn-based heroes.

Continuing to invest in its EA Originals indie publishing initiative, EA revealed a striking-looking new indie game. Created by Berlin-based studio Jo-Mei, Sea Of Solitude is based on its creator’s own struggles with loneliness. While the specifics of the gameplay have yet to be ironed out, it looks to be a sea-based game telling an emotional story about how loneliness can turn people into monsters. Sporting a dark aesthetic and a mix of sailing, fleeing from monsters and platforming, its eye-catching aesthetic and unique themes could well make Sea Of Solitude a future indie classic.

The game many were waiting for didn’t disappoint, getting the biggest showing of the conference. With a release date of February 22nd 2019 confirmed for PS4, Xbox One, and PC, we got both a longer look at Anthem’s gameplay and a proper explanation of the game from key players at Bioware.

The team confirmed that this isn’t an MMO, but something different. Here, Mass Effect-style player choice is back, with players able to go back to their base and embark on offline reward gathering and interact with NPCs and influence the story. Out on missions, however, players will be able to bring three friends along for the ride.

Thanks to a world ravaged by natural disasters, players will have to traverse Anthem’s world in Iron-Man-esque suits known as javelins. There are four different javelins — ranger, colossus, interceptor and storm — and players are free to switch between them before missions.

Thanks to its strong focus on story, Bioware promised they wanted to keep this a world the players are invested in for years to come. The team will do this by continuously adding new stories missions and locations to the game after launch.

And that’s a wrap for EA at E3 2018! For more impressions on the games as we get to play them, keep it locked to FANDOM.