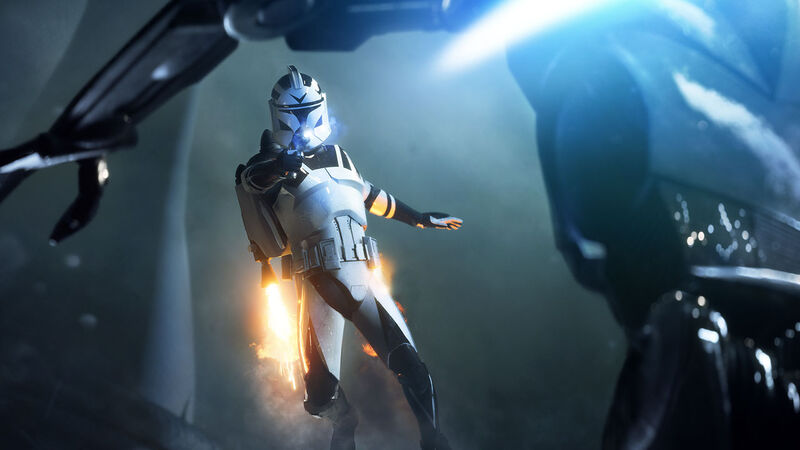 ‘Battlefront II’ and Everything Else Revealed at EA Play E3

E3 is undeniably one of the highlights of the gaming year, and now, after months of anticipation, the festivities are officially underway. The EA Play E3 conference kicked it all off earlier today, delivering all the games we expected as well as a couple of nice surprises.

Yet, while we already knew much about what EA would show, there was still a surprising amount of news to digest in the hour long conference. To save you some precious time, we thought we’d trim all the fat and leave you with all the juicy stuff.

Without further ado, here are the 6 biggest things we learned from EA Play E3’s press conference:

Need For Speed: Payback is basically The Fast and The Furious: The Game

EA revealed the first bit of gameplay for Need For Speed: Payback – and it looks wonderfully ridiculous. With an intense chase scene showing the player forcing pursuing vehicles off the road as they spin off into dramatic slow-mo crashes, Payback looks like Fast and The Furious: The Game, in all but name. With the demo featuring more explosions than your average Call of Duty title, Payback looks big, silly and fun. As well as these tightly scripted segments, EA also revealed that players can expect Payback to have a big and varied open world.

Bioware is back, and with a brand new IP to rival Destiny 2

When it comes to delivering bold new franchises, EA can often be guilty of playing things a little too safe. Thankfully, this year the publisher bucked that trend, announcing not one, but two entirely new games in between its tried and tested franchises. The biggest surprise was arguably the announcement of Anthem, a brand new sci-fi epic from Mass Effect creators Bioware.

Set in a dystopian looking future, the brief teaser showed mech suits, lush scenery….and not a lot else. Unfortunately, that’s about all we have to go on for now. Thankfully, EA has promised more details about the intriguing new game will be revealed at Microsoft’s conference on Monday.

The second big surprise of the conference came in the form of co-op prison adventure, A Way Out. Following in the footsteps of last year’s EA Original branded game, Unravel, A Way Out once again sees the publisher teaming up with an indie studio. Developed by Hazelight, a new studio made up by the team behind indie tear-jerker Brother: A Tale Of Sons, this is a game that is only playable in co-op. Looking like a blend of Uncharted and Prison Break, the game tells the story of inmates Leo and Vincent attempting to escape a federal prison.

Putting an emphasis on couch and online coop, A Way Out tasks both players with escaping how they see fit. Will you choose aggression, distraction or clever well-planned schemes to reach your freedom? That, obviously, is totally up to you, but for our money the best decision you can make right now is to keep an eye on this unique-looking adventure.

Star Wars: Battlefront 2 was arguably the biggest draw for many this year, and EA’s conference didn’t disappoint. Teasing new story info, the publisher revealed that the campaign will bridge the gap between Return Of The Jedi and The Force Awakens. Unsurprisingly, the conference also went all out on multiplayer, showing off thirty minutes of frantic live gameplay.

What we saw today showed a far more in depth- looking multiplayer experience, with class-based characters joining the fray, an overhaul of the shooting mechanics and even hero characters with customizable abilities. After a slew of pricey DLC in the original, EA has also revealed that players will no longer have to buy season passes, and will regular receive free content in Battlefront 2. This will include a mix of new locations, characters, vehicles modes and weapons – which we’re sure will be music to your ears.

EA is continuing to experiment with its sport franchises

While Madden and FIFA have some of the most devoted audiences in gaming, players largely know exactly what to expect from each franchise. This year, however, EA is doubling down on story-telling for its big sports titles. FIFA fans will be pleased to hear that The Journey is back. The Journey: Hunter Returns will pick up where last year’s mode left off, promising transfer window decisions and more drama.

Now EA is also bringing a story mode to Madden too. Madden 18 Longshot tells another rags to riches sports tale, with the college football story featuring the voice talents of Moonlight and House Of Cards actor, Mahershala Ali.

Battlefield 1 is getting 8 new maps this summer

As promised, EA revealed more details about Battlefield 1’s previously announced DLC – In the Name of the Tsar. The Russian-focused expansion will feature 11 new weapons, 6 new maps, a new game mode, more operations and even more vehicles for you to blow up.

Premium Pass holders will also get access to an additional two new maps over the summer: Nivelle Nights in June, and Prise de Tahure in July. As you budding mathematicians may have noted, this means that over the summer Battlefield 1 will get 8 new maps. It’s a good time to be a Battlefield fan.