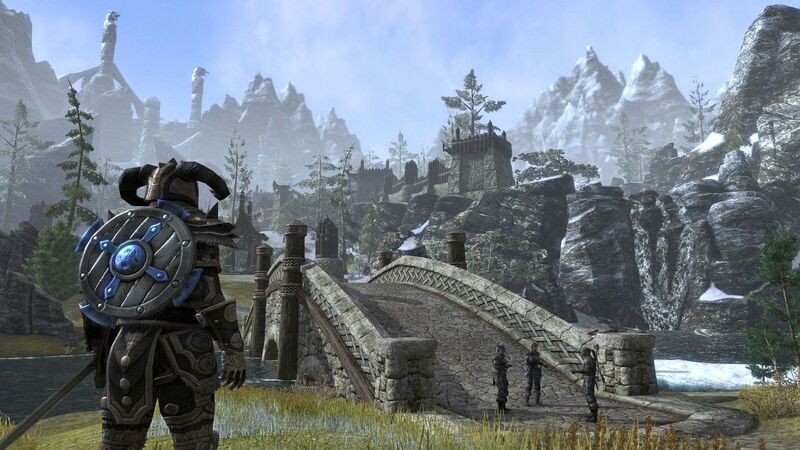 OK, let’s address the dragon in the room — Elder Scrolls Online doesn’t exactly have the best reputation, does it? When it launched back in 2014, the excited pre-release whispers surrounding the fantasy MMO suddenly erupted into groans of disappointment as the game finally made its way into players’ hands.

While fans had been salivating over the idea of an online Skyrim spin-off ever since they uttered their first “Fus Ro Dah,” once it actually arrived, the Elder Scrolls Online (ESO) launch experience simply didn’t feel like a true Bethesda adventure. With the long-running series renowned for spinning epic yarns that kept the player at the centre of its universe, ESO’s disparate narrative and frustratingly closed world made it clear that this was little more than your bog standard MMO.

So, like many other gamers, I wrote it off, never giving the massively multiplayer RPG a second thought. It turns out, though, a lot has changed in the four years since ESO 1.0. While gamers continued to pan it in comment sections, developer ZeniMax studios quietly listened, gathering all the various criticism — and used it to slowly transform ESO into the online Tamriel adventure that fans had been dreaming of.

Hearing rumours of a new and improved ESO, I decided to dive back in, creating a character in the lush, Tolkein-esque realm of the new expansion area, Summerset (sadly not the idyllic, English cider region). The action-packed intro immediately makes me feel like I’m playing a new, single-player Elder Scrolls adventure. Gone are the weird, slightly delayed attack animations that define most MMOs. Instead, as a horde of undead nasties swarm toward my hero (who I named Scrolleth the Elder, obviously), I’m surprised to see that swinging Scrolleth’s sword rewards me with the same immediate satisfaction I’d expect from Skyrim.

The narrative too has improved leaps and bounds since its original incarnation. This time, I do believe the line that I’m “ the only who can save Tamriel.” Why? Because the well-scripted dungeons and quests feel far more like a single-player RPG than the generic “kill x, fetch y” chores you expect from the genre.

It’s worth noting that I’m playing this all on console, too — which is traditionally the MMO genre’s mortal enemy. It’s impressive how well ZeniMax has condensed a plethora of menus and hotkeys to work with so few buttons, with none of the awkward fiddly controls that made navigating Final Fantasy XIV such a chore on PS4. It’s a strange feeling, suddenly enjoying something you’d written off years ago.

With a passing mention of ESO usually greeted with eye rolls or a dismissive wave of the hand, it’s difficult not to feel like I’ve discovered a secret gaming world. Keen to find out more about ESO’s shocking rebirth, I spoke to the game’s Creative Director, Rich Lambert.

“The PC launch was a little bit rough for us,” admits Rich. “We didn’t quite get it, we just didn’t quite have that Elder Scrolls feel. The game didn’t really start to feel like Elder Scrolls until, oh boy… I guess towards the end of 2016. That was when we did our One Tamriel update, which removed a lot of those MMO-isms, if you will.”

Opening Up the World

“[At launch,] we just didn’t get it.” — Rich Lambert, Creative Director

By then, though, not only had most gamers forgotten about ESO, but the majority of console players had also given up on the idea of having a controller-friendly MMO. But with ESO already racking up huge development costs, ZeniMax knew they had to keep building upon their solid MMO foundation until their connected world really felt like Elder Scrolls.

“MMOs are extremely difficult to make and they’re also extremely expensive,” says Rich. “Todd Howard‘s group has an amazing track record, developing Elder Scrolls into this unbelievably strong IP that was beloved by its fanbase. So, yeah, there was a lot of pressure on us to deliver something quality, to keep working and deliver something really, really good.”

Zenimax knew that the combat was almost there. What needed to come next was the thing that really defines Elder Scrolls — a sense of freedom.

“Before, there were these arbitrary level gates going into zones. You had to be a certain level to go to a zone because the monsters were harder. Axing those really opened the world up for us and made it feel like Elder Scrolls — because Elder Scrolls is about exploration… it’s about you exploring, and your journey through the world rather than a linear journey.”

A Class of Its Own

For many players though, it’s not just the literal path you choose to take that defines freedom — it’s the options you’re given to mold your character, too.

“If you look at Elder Scrolls over the years and how they’ve done things, it’s always been ‘play the way you want to play’, even to the point where they removed classes over the years,” says Rich. “In Oblivion you kind of had templates, where you could kind of make a character that fits that theme and then in Skyrim, no classes, they had a skill tree. So, we wanted to get that feel of freedom [right] while still kind of having that class identity, because that’s one of the things MMO players can easily wrap their heads around, ‘I am this class’.”

Having lost a fair few hours to MMOs in my time, a rigidly defined class system is something I’d just come to expect from the genre. It was with some surprise then, that I discovered ESO players are given far more flexibility. Here, you are able to role a mage, but instead of being tied to robes and staves for the next thousand hours, you can ditch them whenever you please and run around Tamriel levelling up your two-handed sword skill.

Yet, as nice as having a flexible class system is, as every Elder Scrolls fan will tell you, it’s your actions that really define who you are in Tamriel.

It’s About the Little Things

“[A]ll the little things you can steal and the boxes you can open … That’s what really makes the world feel alive.” — Rich Lambert, Creative Director

“That was one of the bits of feedback that we got from the player base, ‘Where’s the Thieves Guild? Where’s Dark Brotherhood? Where’s being able to mess with the world, the thieving, the killing?’”

Running through the hub city of Summerset, I find myself mashing the “A” button impatiently while listening to a quest giver yammer on — until I suddenly see the “steal” prompt flash on the screen. It’s something I didn’t think was possible in a persistent online world, and within seconds, I’m gleefully pickpocketing NPCs and stealing an excessive number of candles for the sheer hell of it.

“We actually struggled really hard with trying to figure how that was going to work in an online space,” says Rich. “In a single-player space, it’s fine because you’re only kind of ruining your own fun or getting yourself into trouble. In a multiplayer space, there’s potential for you to get other people in trouble. So, we looked really hard to what are the type of actions that players can do and what are the types of reactions guards could have and NPCs could have. And that’s kind of how we settled in on the justice system. I call them clickies, all the little things you can steal and the boxes you can open, the sacks of things you can take out. That really makes the world feel alive.”

But without a decent story to keep you invested, this would hardly be worthy of the Elder Scrolls name. So far, what I’ve seen of the story feels like a fun (if pretty generic) bit of high fantasy. Yet, it’s impressive that, despite the fact I’m roaming a hugely populated server, each time I’m given a quest, I feel like this is a story that is meant entirely for Mr Scrolleth the Elder.

“One of the biggest challenges is making the player feel like they’re always at the center of things,” explains Rich. “That one is really, really hard. We tried a lot of different things early on, and they didn’t necessarily work that well. The other problem you have is because this is such a social game and it’s a multiplayer game, player separation is a big issue. It’s one of the things we spent a long time at launch trying to fix because we focused so much on letting the player be the key person in the story. So we would use layered [storytelling].

After a few moments of silence and me shrugging pointlessly to myself during our phone interview, it becomes clear to Rich that I have no idea what he means by layered storytelling.

“I think a good example of that is there’s a number of quests where you have the choice to kill an NPC or not to kill an NPC. If, say, I choose to kill them — and you choose to let them go — when we both go back to that point, I won’t see the NPC that I killed — it will be another NPC — but you will see the NPC that you saved. So, we can do things where we change what you see, but that NPC is kind of always there. It means you always feel invested, but we don’t have to actually separate the players.”

As Scrolleth the Elder continues to wreak havoc across the nooby areas of Tamriel, at around the ten-hour mark it suddenly dawns on me — I haven’t even had the option to team up with another player yet. So how exactly does grouping work in ESO?

“So, we allow you to have a critical path, story path, that is for the single player, but if you want to get into the multiplayer aspects you will naturally kind of stumble upon it in your exploration,” explains Rish. “And then if you really want to do more of that stuff, we have group instances where you have to have four players. Then we also have the trials which [are] more akin to the end-game stuff, our version of raids, which require 12 players.”

The more I talk to Rich the more I hear an almost palpable sense of relief in his voice. Instead of having to defend his game and pitch me everything that ZeniMax has been working so hard to accomplish over the last four years, he seems excited to be speaking to a new convert. So there’s only really one question left to ask: “What would you say to those who, like me, had already written Elder Scrolls Online off all those years ago?”

“I would say this is an Elder Scrolls experience. Just because it’s online doesn’t necessarily mean you’re required to go with other players. You can play it your own way, play at your own pace, play the way you want to play and really explore,” Rich pauses thoughtfully. “Also, our game isn’t a rush to the end — whereas that’s where the real game begins in a lot of MMOs. Our game? It’s just about your journey through this magical world.”