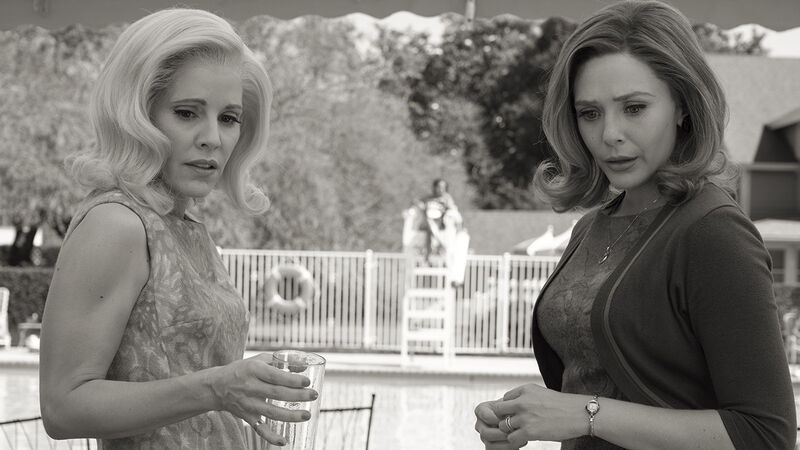 Emma Caulfield was not announced as part of the WandaVision cast until shortly before the show’s debut on Disney+, but once it was revealed she was playing Dottie Jones, there was a ton of positive reaction as word spread that the Buffy the Vampire Slayer alum – known for her role as Anya on that iconic series — would be a part of Marvel Studios’ first TV show for Disney+.

Speaking to Fandom, Caulfield said, regarding that positive reaction, “It feels good! I’d hate to be part of something and for people to go, ‘Ugh, we don’t like her. We hate her, no! Why’d you have to ruin it?’ So it’s always nice to feel like you’re welcomed and then you’re just like, okay, I hope you like it!’

Suffice to say, plenty of people have been liking WandaVision and its trippy take on the Marvel Cinematic Universe and Caulfield spoke about the mysterious nature of the show and her role, the prep work involved, and seeing the theories fans have about it all

Caulfield had previously worked with WandaVision creator Jac Schaeffer on the film Timer but said that even as she and Schaeffer discussed her joining the project, the nature of WandaVision — and its look at Wanda Maximoff and Vision strangely living inside what seems to be classic sitcom scenarios — was kept mysterious.

“I didn’t know anything,” Caulfield recalled, of the casting process. “She asked me if I wanted to be a part of it and of course I said yes and then she said ‘You just need to get Kevin Feige to sign off on you. I can just tell you that I’d like you to look a little period, look a little mid-century-ish. I’m not gonna say what part mid-century” and then she gave me some type of Dottie dialogue — I don’t remember what it was or if it’s even what was used in the show — and that was really it. I didn’t know anything so when I did get the approval and I got hired it was like, ‘Okay, here’s the script and you’re gonna go to the table read in Atlanta.’ And then I was like, ‘Oh my gosh, wow, this is so incredibly cool!’ Since then, it’s just been a joy.”

Once the sitcom nature of WandaVision was revealed to her and her castmates, Caulfield recalled, “There was a lot of watching of the classic shows. There was a lot of discussion and analyzing of classic shows, from Dick Van Dyke to Bewitched… Brady Bunch was another one but for those really older ones, particularly those first couple of episodes, the late 50’s, early 60’s stuff, that was such a specific time, including the way the women spoke. We had an accent coach to really nail the mid-Atlantic region and then how women sat, and how loud the voices were, and how they would interact with each other in the time period but then also within that specific kind of sitcom. You know, just really getting all the technical stuff down first before one could really dive into the actual person. All the outside stuff, at least for me, greatly informed what I was going to do and how I was gonna act. The hair, the wigs, the jewelry, the costumes, the way I had to speak, all of that was just scary but it shaped it and it helped.”

When we meet Dottie, she is essentially the queen bee of Westview, NJ, relishing her authority position among the other women – though we see that confidence quickly, albeit briefly, fall apart in the show’s second episode when the voice of FBI agent Jimmy Woo can be heard by Dottie and Wanda on a radio, bringing a bit of the real world into the manufactured sitcom reality of Westview.

On the performance side, Caulfield said that for the most part, she decided, “When Dottie’s just Dottie, I had all the decisions that I made for her that any actor does. You have your blueprint and you make choices and you try them out and maybe they work and maybe they don’t, but I had stuff where I, in my own work with that character, was like, ‘Okay, this is how I am understanding Dottie.”

When Dottie hears Jimmy’s voice, she suddenly seems very panicked and shatters a glass she’s holding, cutting her hand open – which in turn strikingly brings some color into the black and white visuals of the show via Dottie’s blood. Said Caulfield, “Until Dottie has that moment where she breaks the glass and the reality shifts for a second, until that moment, those [character] choices are solid. When something has to shift, then it [all] has to shift, if that makes sense.”

When it came to filming that scene by the pool with Dottie and Wanda, Caulfield recalled, “It was very hard. That was definitely the most technically demanding scene. We took, I think, two days. There were just a lot of moving parts for that. Not just tonally but there were these effects and different cues and the staging for the hand for the color aspect and the breaking fake glass, and then not having a glass, and then pausing for the glass, and pausing for the blood coming in, making sure you’re right for the angle… One camera is looking here at the radio, you’ve got cues for the people that are doing the radio sounds, you have us, and you have cameras zooming in. It just couldn’t be off for a second.” She added, with a laugh, “And then, also, you know, act and sell it too!”

As quickly as Dottie shows concern, she then snaps back into her usual demeanor, despite her hand being cut open, and Caulfield said, “The shift out from being in that zone where I don’t know what’s happening — terrified back into, like, ‘I’m sorry I don’t know what happened. Can you get me a Band-Aid?’ — it was challenging. It was rewarding to see it pay off, because I didn’t like what I did at all. I was never really quite pleased.”

Regarding acting alongside Olsen, Caulfield added, “I was always blown away by her, but I was never quite satisfied with what I did. But it was much better when I saw it than what I thought it was in my head for me. I was like, “You did okay!’”

One thing that very useful for her, Caulfield revealed, was that by the time she was filming scenes like the one at the pool, when it came to the true nature of WandaVision and its story, “I think I knew almost everything. I feel like I was in it and that I had all the information. A lot of people were really in the dark and I can imagine how difficult that would be, to not be able to form a character, to make an educated decision without key pieces of knowledge. But I’m pretty sure I knew from the get-go what was going on.”

Of course now that WandaVision is airing the fan theories are flying. And while the most recent episode confirmed a lot, as we learned S.W.O.R.D. and the FBI are trying to put a stop to the bizarre situation in Westview, which is seemingly all caused by Wanda, many new questions were raised in the process – such as why Dottie is one of the only characters not identified by the episode’s conclusion, as Jimmy Woo begins to compile the true identity of everyone trapped in the sitcom realm.

Said AntIsBack on Fandom’s MCU wiki, “We didn’t get Agnes and Dottie’s real names for some reason… hm. I wonder why,” joined by others like CaptainAmerica287, who observed, “Dottie Jones isn’t on the board and Agnes doesn’t have a driver’s license….that’s very suspicious.”

Said Caulfield, “I love all the theories. I love hearing everything. I love it.” When it comes to just how invested the fans are, she added, “I wasn’t expecting so much attention straight away. I just wasn’t expecting it to hit quickly like that. And me, that character, I wasn’t expecting that stuff to take off. The show obviously was going to be this amazing job from the get-go because it’s awesome and has great characters and it’s Marvel, but I wasn’t quite expecting the attention to detail or the focus that was being given to Dottie straight out of the gate. It was sort of surprising but flattering. It’s cool!”