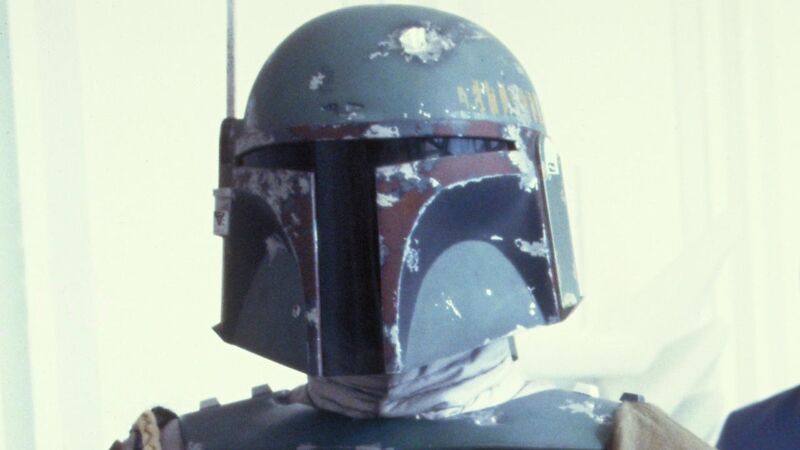 Before November 2019, if you asked the average person to name something that reminded them of Star Wars, you would likely get predictable answers. Darth Vader. Stormtroopers. Jedi Knights and lightsabers. The Force. “I am your father.” Maybe, just maybe, a grudging nod to Jar Jar Binks. And on some occasions, you might come across someone who would name Boba Fett.

This year marks the 40th anniversary of the opening of The Empire Strikes Back, on May 21, 1980,and Boba Fett’s big screen debut, following a short animated appearance in 1978’s infamous The Star Wars Holiday Special. Only appearing in Empire for a little over 6 minutes, it would be hard to identify a minor film character who has garnered as much devotion with so little screen time. He and his on-screen clone daddy, Jango, inspired a whole movement in the Mandalorian Mercs Costume Club, and there is no shortage of Fett-related merchandise and tie-in stories. The ardent Fett fandom is a powerful subculture-within-a-subculture, but not as fixed in the general public consciousness as other parts of the Star Wars universe.

The Mandalorian changed all of that. For what felt like a thousand generations, the Jedi Knights were the most recognizable element of Star Wars. Following The Rise of Skywalker, and the winding down of The Clone Wars, the immediate on-screen future of this universe is in the hands of a lone Mandalorian warrior and his little green foster kid. Ask someone what they think of when you say “Star Wars” now, and you’re just as likely to hear someone declare “Baby Yoda” or “the Mandalorian.” With recent reports of Temuera Morrison returning to the screen to reprise his role as Boba Fett, the Mandalorian subculture is about to become even more mainstream. If the Child is presiding over internet memes like some minuscule, naive deity, and the Mandalorian is his chief priest, Boba Fett was the herald of them both.

The Making of a Tribe

The bounty hunter in the dented helmet’s leap into existence is well documented. Originally conceived as one of a cadre of Imperial “Super Troopers,” Ralph McQuarrie’s initial designs for Boba Fett resembled a stormtrooper with a jetpack. Once these troopers were dropped from story plans, the design was adapted to have him become a single bounty hunter. Joe Johnson describes very deliberate efforts to make his look unique:

“Originally, Boba Fett was part of a force we called Super Troopers, and they were these really high-tech fighting units that all looked alike. That eventually evolved into a single bounty hunter. I painted Boba’s outfit and tried to make it look like he had scavenged parts and had done some personalizing of his costume; he had little trophies hanging from his belt, and he had little braids of hair, almost like a collection of scalps.”

These design choices made one thing clear that has carried over into later depictions of Mandalorian culture: armor is identity. The word Mandalorian is never once uttered in the original Star Wars trilogy. The closest thing to a backstory is the description of Boba Fett’s customized battle armor in Donald F. Glut’s novelization of the film:

“He was dressed in a weapon-covered, armored spacesuit, the kind worn by a group of evil warriors defeated by the Jedi Knights during the Clone Wars.”

All of the history of Mandalore can be traced back to this throwaway sentence in a pulp adaptation of the film. Early Fett fans were hopeful that this helmeted tough guy would get increased screen time in Return of the Jedi, only to see him unceremoniously dispatched by Han Solo’s dumb luck. But his story, and the story of his people — or at least, the people he was emulating — would get relentless attention in the burgeoning Expanded Universe.

Before Disney acquired Lucasfilm, Mandalorians popped up in countless pieces of tie-in media. In Knights of the Old Republic and its sequel, Mandalore’s wars of conquest are the inciting incident that leads the Jedi Order into battle and the creation of a nascent Sith Empire. Those Mandalorians are, at most times, little more than helmeted baddies. Like Fett, they lingered on the fringes, never taking center stage, serving as supporting characters at best.

In the old Legends material, several books explored Mandalorian culture in depth. Karen Traviss was the mastermind behind most of them, penning books set in the era of the Clone Wars like the Republic Commando series that laid the foundation for the Mandalorian language. The Legacy of the Force series brought Boba Fett once again to the fore, debilitated by a disease that ravages clones, trying to find a place in Mandalorian society and rekindle a relationship with his estranged daughter. Those books started to define what Mandalorian culture was: bellicose and clannish, devoted to preserving tradition. Traviss leaned into the image of Mandalorians as a wide-ranging nation of former conquerors, with Boba Fett as their presumptive chief.

Fett hasn’t yet had any such luck in the newer, post-Jedi media. After his plunge into the Pit of Carkoon, Boba Fett’s canonical fate is uncertain. Having previously been resurrected in Legends stories, there is some expectation that he could have survived. He exists in a state that some fans have labeled Schrodinger’s Fett: until there is a story decision one way or another, he is both alive and dead in the Sarlacc. But if his armor is made of the Beskar for which the Empire was willing to destroy an entire society, it may be that he survived the experience unharmed.

In the book series Aftermath, a fringe Tatooine lawman named Cobb Vanth comes into the possession of armor that could have once been Boba Fett’s, implying that someone either abandoned it or retrieved it from its presumed resting place. A lot of conversation is now out there about Timothy Olyphant’s role in The Mandalorian Season 2 and that he may be playing Cobb Vanth. Meanwhile, if Fett is indeed alive — though it’s not clear yet in what manner we’ll be seeing him, so flashbacks or recordings are also possibilities — perhaps he has plans to reclaim the armor for himself, or has discarded the acid-scarred plates in favor of something better. Perhaps season 2 of The Mandalorian will redefine Fett in the same way that The Clone Wars redefined “Mandalorian.”

The Clone Wars, Rebels and the (Re)Making of Mandalorian Culture

The Clone Wars marked a departure from earlier Expanded Universe/Legends versions of Mandalore … on the surface. In bringing the Mandalorian culture to the screen for the first time, the crew of The Clone Wars created a society devoted to peace. Mandalore’s empty landscape is a post-apocalyptic world ravaged by war. Those groups, like Death Watch who crave a return to the old days of martial glory, plot in secret and keep their armor polished and painted, their blasters loaded, and their jetpacks fuelled.

Simultaneously, The Clone Wars took great pains to put Boba Fett on a different path. The show reintroduces us to Boba Fett as a pre-teen, bent on seeking revenge against Mace Windu for the death of his father. Failing in that mission, he’s swept up in the same underworld of which his father was a part, crossing paths with Aurra Sing, Bossk, Embo, and Cad Bane, bounty hunters who possess skill and cruelty in equal measure. They serve as a vicious sort of foster family, forcing young Boba to harden and embrace a life of violence as a means of survival. As Dave Filoni revealed at Celebration Orlando in 2017, Boba’s journey would have culminated in a Solo-esque showdown facing off in a duel against Cad Bane and earning the distinctive dent in his helmet. He would wear that dent as a badge, a reminder that it’s hard to stop Boba Fett, even with a blaster shot to the head.

Star Wars Rebels introduced us to Sabine Wren, a Mandalorian-born washout of the Imperial Academy. She is expressive, clever, and fierce in combat. Her artwork, and the introduction of her father as a renowned artist, show a society that values far more than martial prowess. It is Sabine who is our primary guide to what it means to be Mandalorian under the oppression of the Empire.

Mandalore itself is a microcosm of the Star Wars galaxy and the conflicts that define it. Its story is the story of conquest, oppression, rebellion, and liberation at the heart of the Star Wars saga as a whole. In their time on-screen during The Clone Wars and Rebels, the Mandalorians have gone through a crisis of conscience, a violent coup, occupation by a foreign power, colonial oppression, and restoration of self-governance. Now, with the finale of The Clone Wars bringing us the Siege of Mandalore, we get to see a world in the throes of a civil war. Mandalorians are now a fully-realized fictional society, with different sects and viewpoints, legends and histories, artistic heritage, a subculture with sub-cultures of its own.

With his polished, unadorned armor and taciturn demeanor, Din Djarin, The Mandalorian‘s title character, has become a cipher and guide to a Mandalorian culture after the presumed devastation of his homeworld. He is adopted into this society, a war orphan who found a home with new people. His fierce protection of the Child and his peers’ support of that mission, up to and including exposing their location and suffering extreme losses, reveal some of the Mandalorian values. Instead of Jedi sprinting to the rescue with lightsabers ablaze, we have Mandalorians in their distinctive armor rocketing into the middle of a firefight.

His tribe is in hiding, reverting to a custom of never showing their faces in public – a contrast to the Mandalorians of The Clone Wars and Rebels, who galavant sans helmet all of the time. Even that discrepancy points to a complex society, where different groups have different customs of dress and social conduct. The series has added layers to the mystery of the Force, shown us glimpses of everyday galactic citizens, and raised questions about the viability of the post-Imperial government. Tyranny is gone, and lawlessness has taken its place. A wandering, helmeted warrior might be the best witness to this era of galactic history.

The second season of The Mandalorian has already finished filming, and new stories are headed our way later this year. Casting rumors are flying at jet-pack speed. With reports that Ahsoka Tano will make a live-action debut, and that Katee Sackhoff will reprise her role as Bo-Katan, plus Olyphant’s casting, the anticipation is only escalating. Their stories, too, are tied up in the fate of Mandalore, having fought in the Siege and crossed paths with Sabine Wren both during and after the Rebellion. As for Boba Fett, in the new canon he has made no personal claim to Mandalorian heritage, despite wearing their armor. If all three of these characters’ paths cross, it will further weave the story of Mandalore into one cohesive narrative.

The image and impact of “Mandalorians” have come a long way from a minor character in The Empire Strikes Back (who may or may not be Mandalorian anyway), to one of a whole society with history, hopes for the future, setbacks, and triumphs in their saga. Tell someone on the street now, “may the Force be with you,” and they might fire back a somber “this is the Way.”