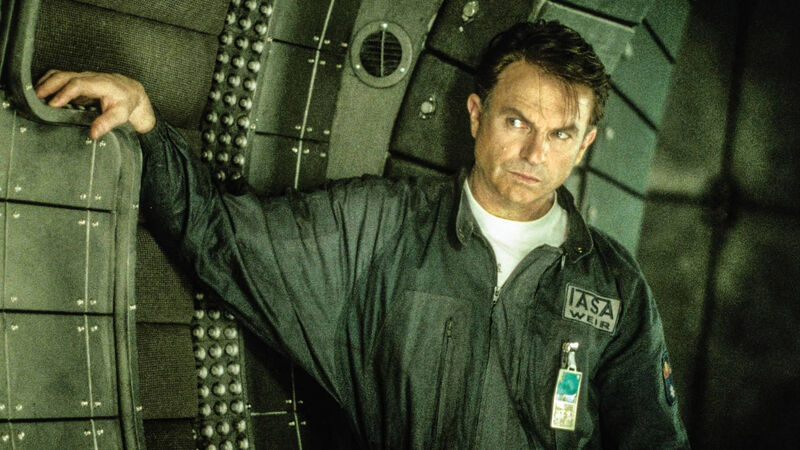 If you’re a fan of sci-fi or horror, you may have seen some recent articles on the web about deleted scenes from a movie called Event Horizon. Released in 1997, this shocker from director Paul W. S. Anderson (Alien vs. Predator, Resident Evil) is a highly watchable blend of Star Trek ideas, Alien looks, and Hellraiser scares. Set in 2047, the film is about a rescue team who travels to Neptune’s orbit to investigate a distress call. The source is the Event Horizon: a ship that mysteriously vanished without a trace seven years prior.

What happens to the rescue crew is exceedingly nasty. So nasty, in fact, that many of the film’s goriest shots had to be trimmed. Perhaps you’ve seen these bloody, maggoty “deleted scenes” floating around the web. Maybe their sheer grossness surprised you. You might be more surprised to learn that these “deleted scenes” weren’t deleted at all — they’re in the movie. They’re just very, very quick. It’s true that they lasted a few frames longer in rough cuts of the film, but Paramount and test audiences balked at how violent Event Horizon was.

Consequently, editors shaved the film down to 96 minutes. But despite all the trimming, Event Horizon failed to impress critics. It underperformed at the box office, adding insult to injury. But in the 19 years since its limp release, the film has become something of a cult gem. Now, Paul W. S. Anderson and producer Lloyd Levin both claim that a more gruesome cut of the film, reported to run for 130 minutes, molders on a VHS cassette somewhere.

Now, there’s no way they cut 34 minutes of pure gore and violence out of Event Horizon. Having a 130-minute rough cut with 34 minutes of expendable violence is just wasteful filmmaking. But if such a significant amount of footage is missing from the final cut, what haven’t we seen? I read two drafts of Philip Eisner’s screenplay to shed some light on the Event Horizon we never got.

In a 1992 draft, the screenplay opens much like the movie. After a short nightmare sequence, we meet Dr. Weir (Sam Neill). But instead of cutting right to the chase like the film does, there is an additional scene of exposition. Admiral Hollis and his adjutant, Lyle, brief Weir on the reappearance of the titular ship. This scene survived into production but wound up on the cutting room floor. Why? To be blunt, it’s boring. The performances are stiff. It’s also functionally useless — all the necessary exposition shows up again later. If you’re so inclined, you can watch this scene below.

This is, without a doubt, the deleted sequence I want to see the most. The only trouble is that it never made it to production. In these introductory scenes, we meet the rescue crew of the Lewis and Clarke. They receive a distress call from a small mining vessel called The Lucky Strike. The rescue sequence is riveting, invoking the famous “spinning sequence” from Interstellar. This exciting rescue gives Captain Miller (Laurence Fishburne) the screen time and setup needed to be the film’s protagonist. In the final cut, he plays second fiddle to Dr. Weir.

The 1992 draft features a scene aboard the Lewis and Clarke in which Miller wakes from a nightmare. He walks to the bridge to find Dr. Weir, where they share an emotional beat. They talk about Weir’s deceased wife and the guilt he holds for being a workaholic while she was terminally ill (in the film, her death is a suicide.) Scenes like this are easy to cut, especially in the first act — we want them to get to the damn ship already. But this is a well-written scene that provides a better foundation for the dynamic between these guys. It also provides a better reason why Dr. Weir doesn’t know what happened to the Event Horizon, which the movie sorely lacks.

Though it’s not so apparent in the final cut, Event Horizon carries a strong whiff of Star Trek. The first ship to attempt faster-than-light travel disappears only to return infected with an evil, shapeless intelligence that can read and control minds. That’s very, very Trek. But earlier drafts of the script were even Trekkier. The technobabble is off the charts. Scenes consist of characters typing commands into computers or discovering aberrant code. They have discussions about radiation levels and argue about thrusters versus ion drives. Philip Eisner put a lot of thought into the technology and logical details of Event Horizon, but almost none of it made it into the final film. That’s probably for the better — a horror movie about hell’s favorite spaceship doesn’t have to be full of lines like “a craft this size displaces too much mass for conventional thrusters.”

Visions of the Beyond

The film’s most gruesome moments are also its shortest. When the rescue team watches the Event Horizon’s video log, they discover the fate of the ship’s crew. It’s not pretty. Later, after the ship’s power has seduced Weir, he shows Miller visions of his crew. Each one of them tortured or dead in unspeakable ways. In an earlier cut of the film, these Hellraiser-inspired images lasted just a bit longer. You can view the very NSFW rough cut of Miller’s visions here, but as I mentioned earlier — it’s not all that different from what’s in the final cut.

However, earlier drafts of the screenplay described something much different. The visions feel much more alien: an unfamiliar red sun. A planet covered in an oily, black sea. Eyeless octopoid aliens ripping each other apart like the crew of the Event Horizon. It reads a lot like a scene from James Gunn’s Slither, in which a girl sees flashes of a worm-like parasite taking over a distant alien planet.

These short visions would’ve added a distinct element of visual exposition to Event Horizon, further illuminating what the evil force is. The shooting draft of the script contains a cheesy line that explains it even further: “I’m not the Devil. I’m much, much older. I watched the Beginning and I will see the End. I am the dark behind the stars. I am the dark inside you all.” Oof.


After the evil force seduces Dr. Weir, Captain Miller blows him out into Neptune’s orbit. Good riddance, right? Wrong. He shows up again as the Weir-beast, his hairless skin carved with runes. But Weir’s reappearance in the screenplay was much more akin to Hellraiser than in the movie. The film shows Cooper (Richard T. Jones) and Starck (Joely Richardson) in the gravity couch bay, surrounded by the tubes of fluid that protect sleeping travelers from sudden changes in acceleration.

The fluid in the central tube turns blood red. The tube shatters, pushing out a crimson tidal wave. Starck then tumbles down a ladder, landing on her back. In the screenplays, Weir’s body reconstitutes inside the blood-filled tube, building up layers of bone, muscle, and skin. Evidence exists in the film’s deleted scenes that Anderson either shot or intended to shoot this sequence. Deleted footage shows a blood-soaked Weir climbing down the ladder head first, grinning at Starck and Cooper. It makes an impression.

Is the 96-minute cut of Event Horizon better than a longer cut featuring the sequences above? Without a doubt, yes. The movie we saw improved on so many of the early draft’s rough spots. The narrative flows more smoothly. The film posits Weir as a more compelling protagonist than Miller. I agree — Weir’s descent is more interesting than Miller’s heroic sacrifice.

Would more gore have improved Event Horizon? I don’t think so. Improvement would mean devoting more time and intelligence to the emotional journeys of its characters. It would mean a less hyperactive style and better dialogue in the third act, especially in the climactic fight between Weir and Miller. If the only cut of Event Horizon we ever get is the theatrical cut, that’s fine. Still, I can’t help but wonder what’s in that mythical lost cut.