‘Rogue One’ is a new kind of Star Wars movie.

‘Rogue One’ is a new kind of Star Wars movie.

And just like its lead character, Jyn Erso, the film rebels against the status quo.

Following Disney’s acquisition of Lucasfilm in 2012, plans were announced for a series of anthology films that would tell standalone stories, separate from the ongoing episodic saga about the Skywalker family that fans have adored since the release of Star Wars: A New Hope in 1977.

Rogue One is the first of those films, still set “a long time ago, in a galaxy far, far away,” but introducing brand new characters and exploring unseen parts of the Star Wars universe. It’s a prequel (not like the ones you’re thinking of) which takes place just before the events of A New Hope, when a group of unlikely heroes band together to deal a substantial blow to the Empire.

Remember the opening crawl of the first Star Wars movie?

Rogue One fills in the blanks of the story alluded to in the opening of A New Hope. It tells how the rebels won that first victory and, most importantly, how they stole the plans for the Empire’s ultimate weapon of mass destruction – the Death Star.

How does Rogue One 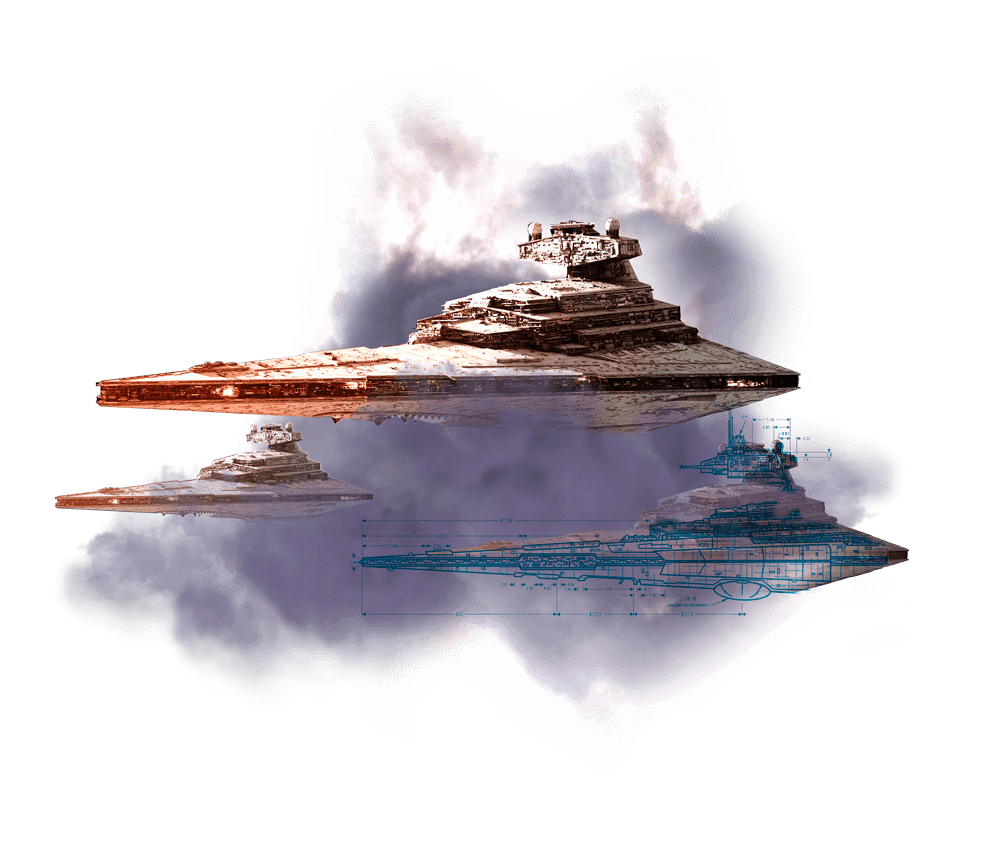 During the time in which the Rogue One story is set, the Galactic Empire has consolidated their hold on the galaxy and are at the height of their power. Imperial Star Destroyers dominate the space lanes, and stormtroopers are a common sight on thousands of planets. The citizens of countless star systems live in fear of the Imperial war machine that has dominated the galaxy for two decades.

In a galaxy without the Jedi, without the Force, normal beings need to stand together to fight the oppression of the Empire.

The Galactic Republic is a distant memory, and individual freedoms are being suppressed in the face of Imperial dominance. But the loss of the Jedi Order – virtually extinct since the execution of Order 66 – has left the galaxy in a state of disarray. While many believe the Imperial lie that the Jedi betrayed the Republic, others hold true to the ideals of the Order. But their loss is keenly felt. Their absence has given rise to a feeling of hopelessness throughout the galaxy, with no one willing to stand up to the Empire in defense of the weak.

All is not lost, however. The Jedi may be gone, but others are emerging to fight against the Empire’s tyrannical rule. The Rebellion opposes the Empire. They may be few in number, and have limited access to resources, but they are tirelessly committed to their goal of restoring freedom to the galaxy. For several years, individual rebel cells waged a guerilla war against the Empire. They’ve since banded together to form the Rebel Alliance, and their power is growing.

Where Does Rogue One take place in the Star Wars timeline?

Where Does Rogue One take place in the Star Wars timeline? 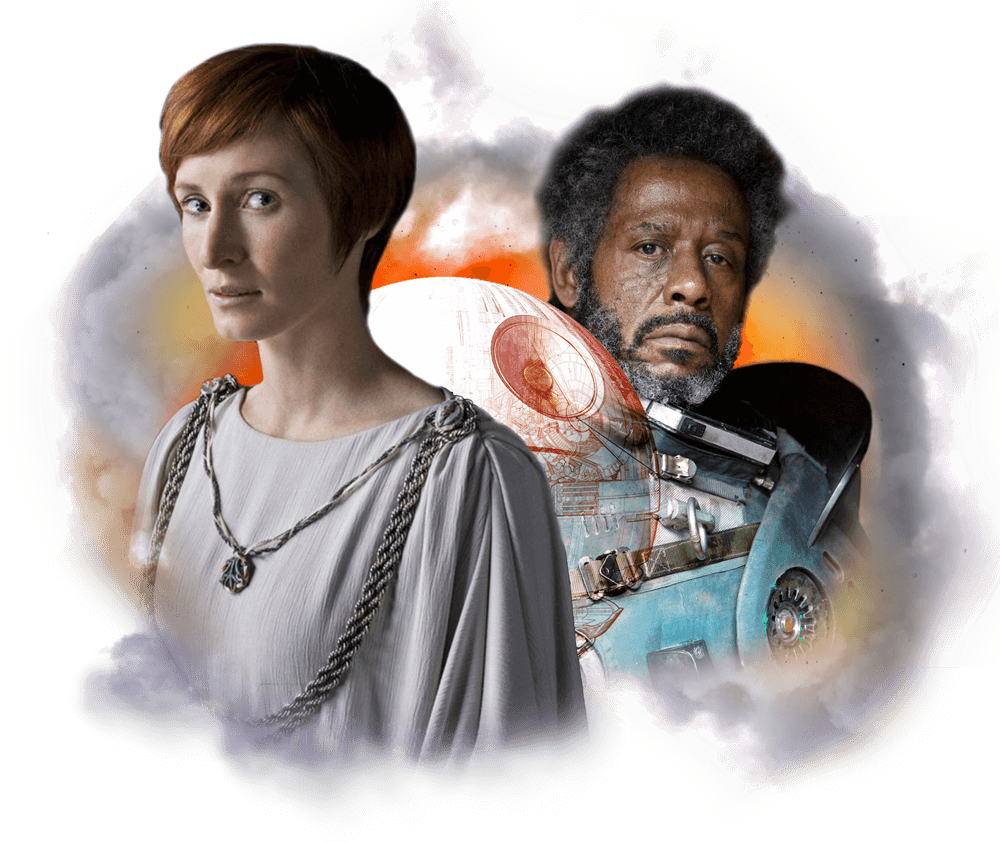 The Rebellion is led by former Senator Mon Mothma, and it is she who sends Jyn and her team in search of the Death Star plans.

First seen on the big screen in Return of the Jedi, delivering the news that many Bothans died to bring the Alliance news of the second Death Star, Mothma was played by actress Caroline Blakiston. Years later, Genevieve O'Reilly was set to portray a younger version of the character in Revenge of the Sith, all her scenes ended up on the cutting room floor, however. O’Reilly reprises the role in Rogue One.

Another prominent Rebel, Saw Gerrera, plays an important role in setting the stage for the events of Rogue One. A freedom fighter who fought for his homeworld of Onderon during the Clone Wars, Gerrera (played by Forest Whitaker) now wages an insurgent war against the Empire from a bunker on Jedha -- an inhabited moon once sacred to the Jedi.

It is the Empire, however, who remain dominate, and their leadership is strong. Director Orson Krennic oversees the construction of the Death Star, a weapon that will become the ultimate power in the universe, capable of destroying planets. But it is Darth Vader, the fallen Jedi Anakin Skywalker, who commands the fear and respect of Imperial and Rebel alike. Vader, who answers to the dreaded Emperor Palpatine, has personally combatted both the Rebellion and the remnants of the Jedi by the time Rogue One begins. 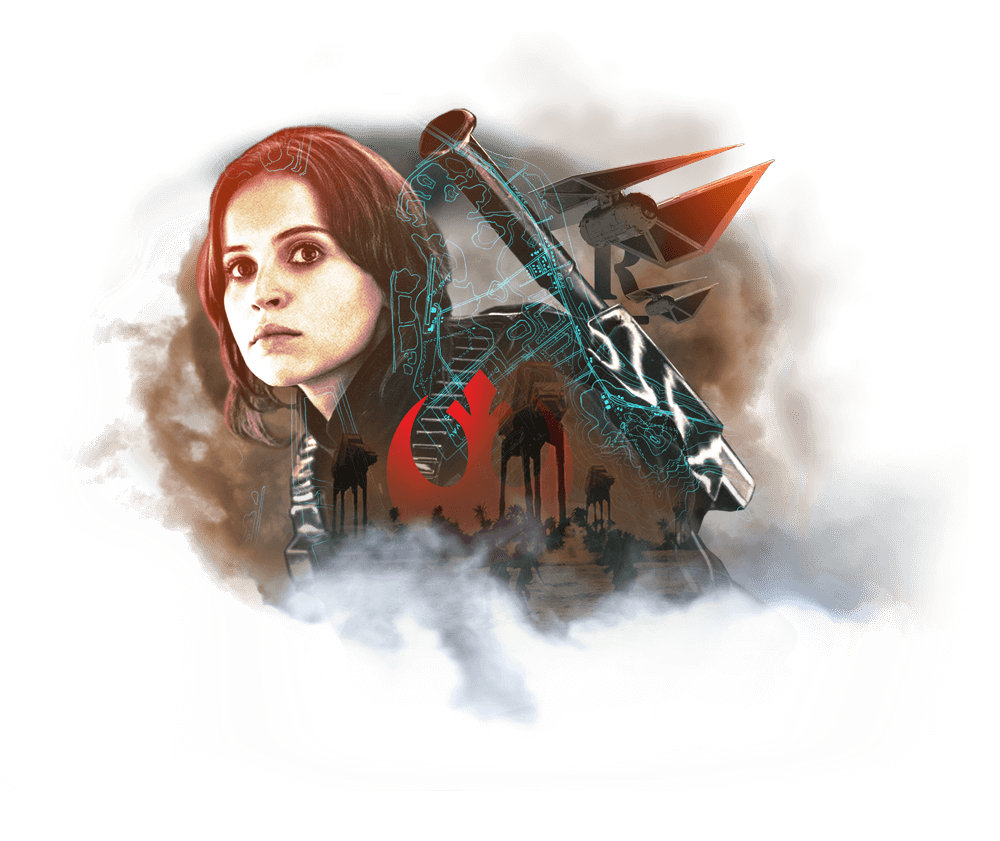 Jyn Erso, played by Felicity Jones, is a hero unlike any other in the Star Wars universe.

Jyn’s father, Galen Erso, is a scientist specializing in energy research. As a young girl, Jyn and her parents were captured by operatives of the Confederacy of Independent Systems during the Clone Wars. They were rescued by Orson Krennic, a friend of her father’s and a member of Palpatine’s top-secret Death Star project.

6 secrets about the Death Star

Galen is coerced by the Empire into working on the Death Star project, eventually leaving Jyn on her own from the age of 15. In the years that followed, Jyn racked up an impressive list of criminal achievements – forgery of Imperial documentation, possession of stolen property, aggravated assault, and resisting arrest. And it’s at her lowest point that the Rebellion comes calling. 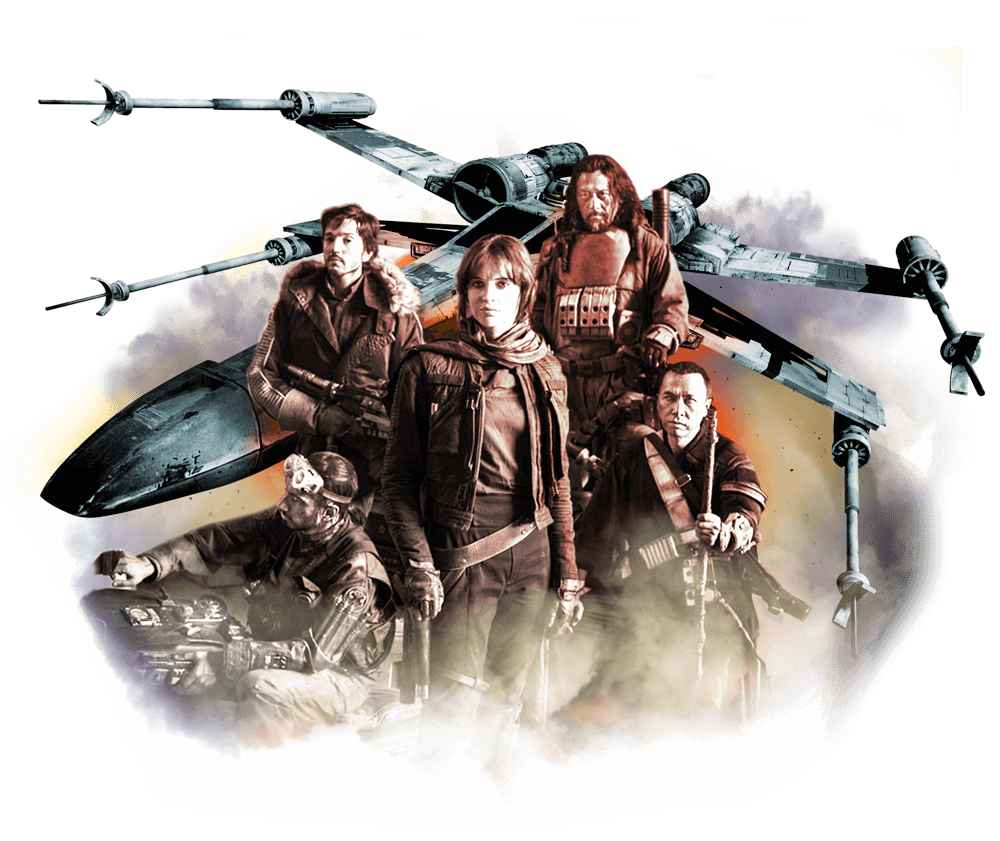 Jyn cannot defeat the Empire alone. She needs a squad. 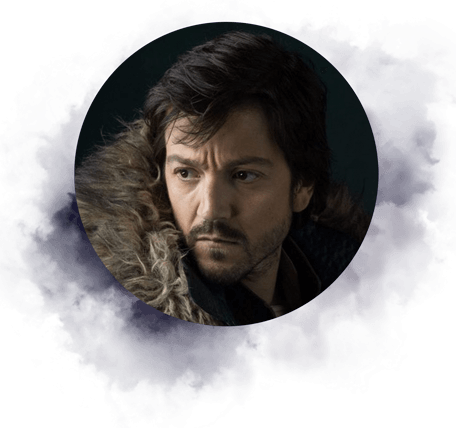 is a veteran Alliance Intelligence operative who is assigned to keep an eye on Jyn during the mission to steal the Death Star plans. 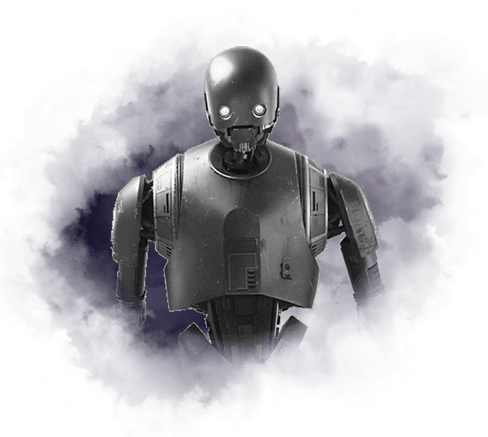 portrayed by Alan Tudyk, is a former Imperial security droid with a bad attitude who was reprogrammed by Captain Andor. 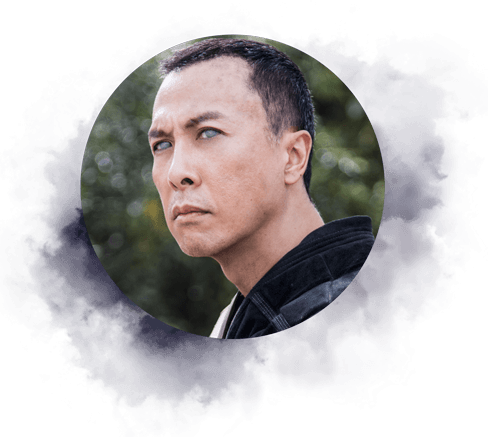 is a blind warrior-monk from Jedha. Although he is not a Jedi, Chirrut believes strongly in the will of the Force. His lack of sight in no way hinders his fighting abilities. 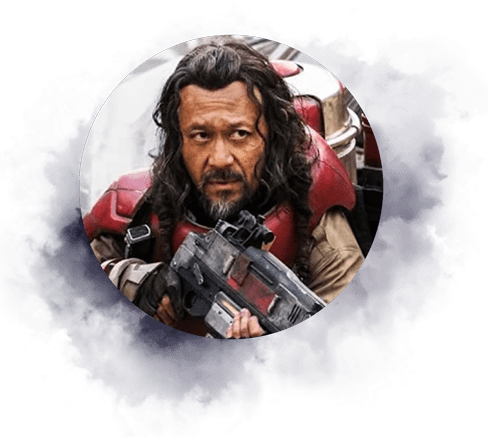 is a freelance assassin, armed with a heavy repeater cannon. Also from Jedha, Baze serves as protector to his friend Chirrut, although he is more pragmatic in his actions. 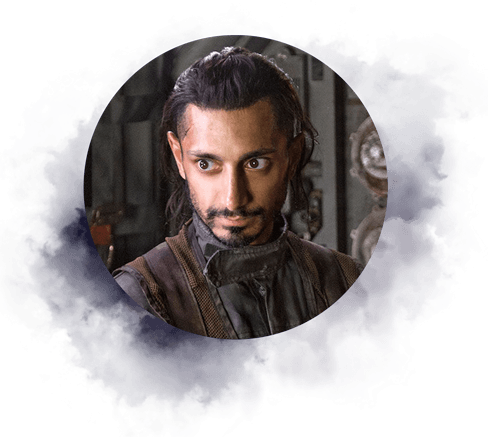 is the team’s pilot and technician who coins the term “Rogue One” as the team’s callsign. A former Imperial flyer, he is known to be hot-headed and impulsive, but anxious. 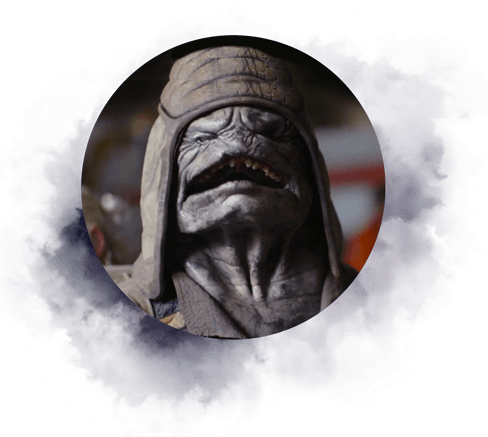 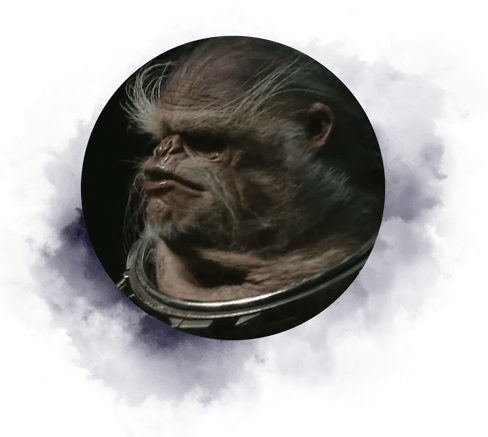 a doorgunner on the team’s U-wing. 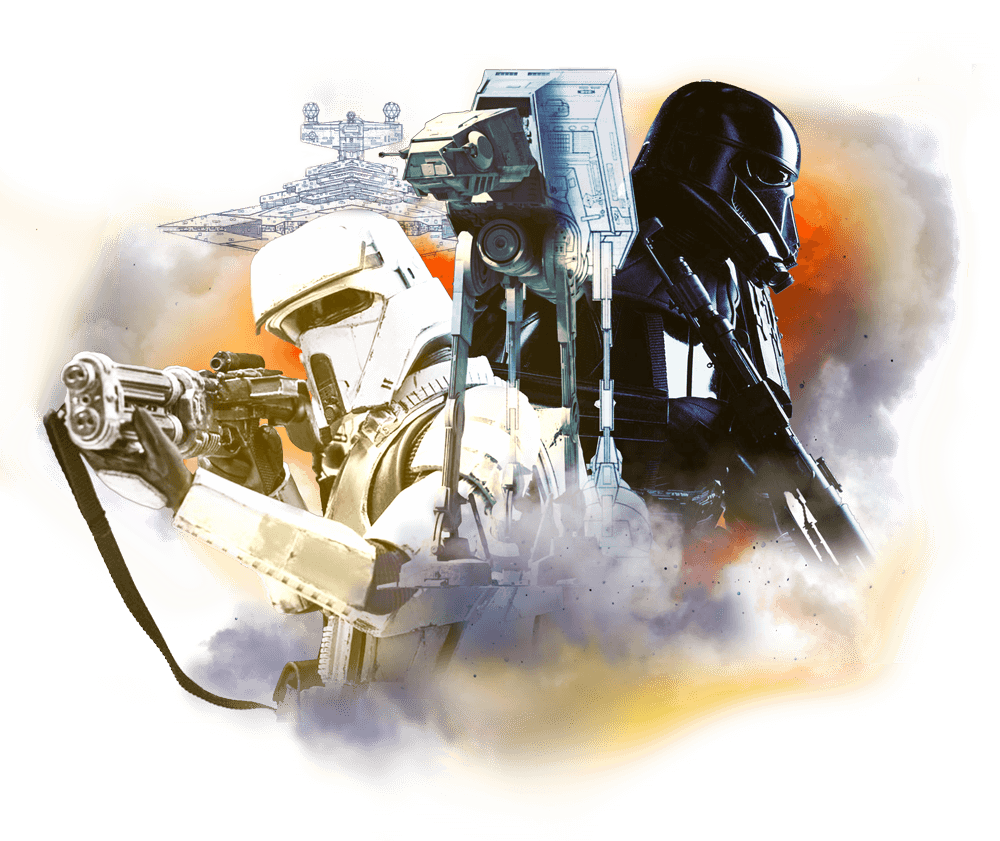 The idea for Rogue One originated with John Knoll, longtime Star Wars VFX artist and current Chief Creative Officer of ILM, who pitched his idea to Lucasfilm president Kathleen Kennedy and Kiri Hart of the Lucasfilm Story Group.

"I started thinking about which story would I like to see told? I informally pitched it around… One of the people I pitched it to was Pablo [Hidalgo], and he was pretty enthusiastic about it, so I made an appointment with Kathy and Kiri, pitched the 20-minute version, and got a pretty good response." ―John Knoll

In order to begin developing the concept, Lucasfilm set out to find a director. Gareth Edwards, who had directed Monsters and who, at the time, was directing Godzilla, was hired for the job. And while his filmography may not seem to make him an obvious choice, it doesn’t hurt that Edwards is a huge Star Wars fan who once traveled to the Tunisian sets of the original Star Wars on vacation.

Edwards has said he endeavoured to make a film grounded in reality, and the first true “war movie” in the Star Wars series.

The pressure’s so high. We’re making a film that’s touching my favorite movie of all time. But if you don’t do anything new, or take a risk, then what are you bringing to the table?

Gary Whitta, also a huge Star Wars fan, who had written The Book of Eli and After Earth, was hired to write Rogue One’s screenplay. Screenwriters Chris Weitz, Scott Z. Burns, and Christopher McQuarrie have since had their hands on the script.

Because Rogue One is set just before the events of A New Hope, great care has been taken to reproduce the look and feel of that first film while still giving the franchise a fresh take. The hidden Rebel base on Yavin 4 has been faithfully recreated, for instance. But the creature effects, visual effects, and overall production design are updated, of course.

There are also new twists on some classic Star Wars designs. Additions include at least two new types of stormtroopers -- the black-armored Death Troopers of Imperial Intelligence and the specialist Shoretroopers charged with guarding the Imperial base on Scarif. New vehicles enter a crowded array of iconic designs, including the AT-ACT (a cargo carrying variant of the fearsome AT-AT), an Imperial hovertank, and the U-wing (a combination dropship and fighter used by our heroes).

Unlike the space fantasy of the mainstream Star Wars films, Rogue One will feel more reality-based. In a galaxy with neither the Jedi nor the Force, normal beings must stand together to fight the oppression of the Empire. Rogue One has a gritty feel, giving the viewer the feeling of being in the middle of a life or death struggle.

It’s also important to note that we, basically, already know how it ends. By the final scene of Rogue One, the Rebels will be successful and the Death Star plans eventually end up in the hands of Princess Leia, who gives them to R2-D2. Of course, it’s one thing to know the end result, but the drama and excitement are found in the journey.