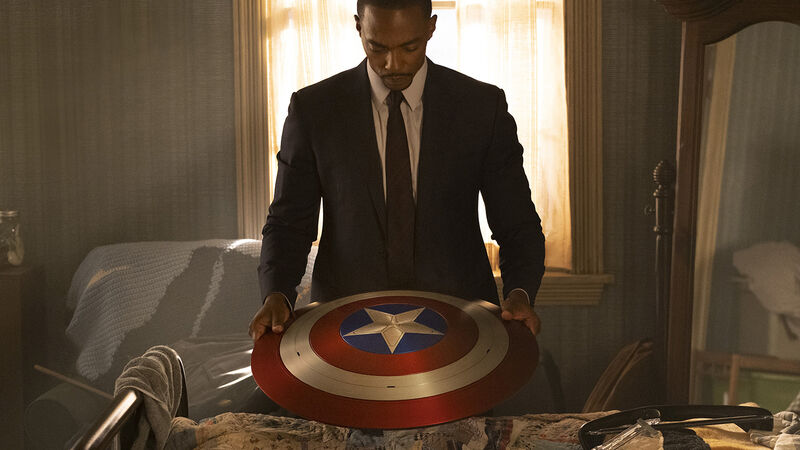 Avengers: Endgame was an emotional roller coaster from start to finish. From the reveal of “Five Years Later” to “AVENGERS ASSEMBLE,” Marvel fans were able to quite literally have “all the feels.” The penultimate scene was an especially gut-wrenching one because it signified the end of Steve Rogers‘ time as Captain America. However, it was also one of hope as a now-elderly Steve (Chris Evans) gave his shield to Sam Wilson (Anthony Mackie), AKA the Falcon.

In the comics, Sam had become Captain America for a time, and now it looks to be his turn to take on that mantle in the MCU. Whether his official transition to the role takes place by the end of the new Disney+ series The Falcon and the Winter Soldier remains to be seen, but one thing is clear – Sam has earned it. Let’s look at moments throughout the MCU that solidified the bond between Captain America and the Falcon and made Steve ultimately decide Sam was the right man to pass his shield onto.

Sam’s first meeting with Steve wasn’t on a mission or during a superhero battle. It was during a morning jog. As Sam makes his way around the Mall in Washington, D.C., Steve continuously sprints past him, amusingly saying “on your left,” each time.

When they finally have a conversation, Sam doesn’t treat Steve like some super celebrity or put him on a pedestal, but rather as an actual person. During good portions of Avengers, people reacted to Steve as though he was either a larger than life figure or a relic from a dead era. Sam treated him like he would anyone else. This moment, while not grandiose as a battle on a helicarrier, singled to Steve that this was someone he wanted in his life and formed a bond that would become legendary.

Even though Sam has always got Cap’s back, he is definitely not just a sidekick. He may have not led the Avengers against the Chitauri, but he is still an empathetic leader in his own right. At a local Veterans’ center, he leads a support group of soldiers suffering from PTSD. In the short time we saw him in this role, Sam gave the group inspiration to keep pushing forward, something which no doubt made an impression on his fellow vet, Steve. If that wasn’t a definitive Captain America trait, we don’t know what is.

Bucky Barnes (Sebastian Stan), Cap’s best friend turned brainwashed HYDRA Winter Soldier, had just spent the majority of the film attempting to kill Cap and Sam. Cap, knowing Bucky wasn’t himself and could be saved, wants to look for him. Sam, having no history with Bucky himself and not forgetting what the Winter Soldier tried to do to him, trusts Cap with his life. If there is any way Bucky can be made whole again, and Cap believes it, that’s good enough for Sam. While “On Your Left” sparked their bond, “When do we start” solidified it.

When Secretary Ross introduced the Sokovia Accords to the Avengers, it divided the team. Tony Stark wanted to abide by them, saying they needed to be held accountable for their actions. Steve opposed, feeling that in their line of work, working through an approval committee could cost more lives than save them. But though Steve was against the Accords, Sam was the first one to raise a voice against them, before knowing Cap’s position. In an argument with James Rhodes, Sam remarked, “How long is gonna be before they LoJack us like a bunch of common criminals?”

While the Avengers’ Civil War pitted close friends and allies against each other, that wasn’t a concern with Captain America and the Falcon because Steve and Sam felt so similarly. Making tough decisions in the pursuit of freedom, regardless of the consequences, is a vital component to the mantle of Captain America.

To say Bucky and Sam’s relationship started off rocky could be the biggest understatement of the MCU. Bucky spent their few meetings trying to kill Sam, then trying to run away from him. There couldn’t be a better “glue” to bring them together than Steve Rogers. They reluctantly formed an alliance, which resulted in them taking on Spider-Man (Tom Holland) during the airport battle (this also showed their dysfunction, as it took two of them to defeat a high school kid).

However, as time grew, so did their friendship, which was apparent in the final moments of Avengers: Endgame. It was a small gesture, but when Sam put his hand on Bucky’s shoulder during Tony’s funeral, it represented how close they were becoming. Like Steve Rogers, Sam Wilson had found a close friend in Bucky Barnes.

Sacrificing for the Greater Good

During the Avengers’ battle at the Berlin airport, Cap and Bucky needed to make it to the Quinjet so they could go after Helmut Zemo – even if their allies were taken down in the process. It was Sam who made the call that he and the rest of Cap’s team would make this sacrifice, knowing getting the two of them on the jet was the mission, no matter the cost. “No, you get to the jet. Both of you. The rest of us aren’t getting out of here.” His faith in his friends gave him the strength to make the toughest of choices, and that faith was rewarded at the end of the film.

Being offered the shield of Captain America is one thing. To accept it is another. When Sam tries it on for the first time, he tells “old Steve” it feels like someone else’s. Steve replies, “It isn’t.” Then, in what can be called a defining moment in the Falcon’s career, there is a 12-second pause. Sam has a look on his face where he is weighing everything about the decision he is about to make. Finally, he looks at Cap and says, “Thank you. I’ll do my best.” His acceptance solidifies that Sam’s journey throughout the MCU was always leading to this moment.

The Falcon and the Winter Soldier premieres March 19 on Disney+.