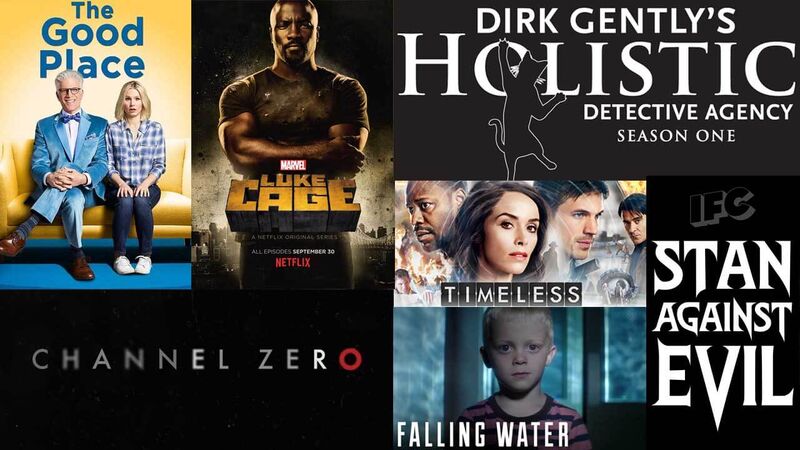 A Look at the Fall’s new Sci-Fi, Fantasy and Horror Shows

For fans of Sci-Fi, Fantasy, and Horror, this is truly the golden age of television. It seems like your favorite comic book characters are on TV five nights a week. The most talked about show in the world features dragons, while zombies are required viewing on a Sunday night. How could things possibly get better? How about more than a dozen new Sci-Fi, Fantasy and Horror shows coming to TV this fall? Here’s the rundown of when everything premieres in the coming months.


Eleanor (Kristen Bell) dies in a traffic accident involving a truck advertising erectile dysfunction meds. She ends up in Heaven but, unfortunately, Heaven mixed up the paperwork. She’s not supposed to be there because she was a supremely unpleasant person while among the living.

If it sounds like you’ve heard this one before, you have because it’s Heaven Can Wait with a twist. Writer/creator Michael Schur (Parks and Recreation, The Office, Brooklyn Nine-Nine) is running the show so it will probably be an extra-twisted twist.

The Good Place debuts on NBC Thursday, September 15 at 10 pm.


Oh goodie, another remake of a classic film into a TV show. Yay.

You know where this one’s going. A family with a demon problem looks to their local priest (Alfonso Herrera) for help. He, in turn, looks to an older and more experienced priest (Ben Daniels) for advice on how to rid them of the hell spawn. It’s creepy, and it’s spooky and altogether ooky.

The Exorcist debuts on FOX Friday, September 23 at 9 pm.

Based on the pilot I saw; this is rather like Z Nation with vampires. The title character is Vanessa “Van” Helsing. She’s resurrected or maybe just related to the original vampire hunter/killer (that bit is not made clear right up front). Van wakes up in the aftermath of the vampire apocalypse with the ability to kick ass and cure vampires with her blood.

This one barely squeaks by with our definition of “fantasy” because it’s more “regular sitcom with a fantasy gimmick” than solid genre show. Zorn (he’s like He-Man with Thundarr’s fashion sense) is an animated character from a fully animated place. He somehow met and married a woman from the non-animated world, and they have a son. The world-building here is secondary to the fish out of water thing where a cartoon barbarian who doesn’t wear pants gets a regular job and tries to connect with his kid.

It’s from Phil Lord and Chris Miller (The Last Man on Earth), so if you like their sense of humor, you should like this one.

Channel Zero is an anthology series originally conceived by the late Ned Vizzini (Teen Wolf, Last Resort, Believe) and Nick Antosca (Hannibal, Teen Wolf, The Forest) with a push from writer/director Max Landis (Chronicle, American Ultra, Me, Him, Her). Vizzini died in 2013, but development continued with the project ordered to series last year. Antosca is Executive Producer.

The first six-episode season will focus on Candle Cove which fans of Creepypasta will recognize as a bizarre children’s show only half remembered by its now adult “fans.” Landis owns the rights to Candle Cove. As a result, he is a producer on the new show.


This show is kind of like The Day After Tomorrow meets Cthulhu (long may he reign).

James Tupper, Anne Heche, and their kids try to survive an Earth that is pretty much toasted by stellar phenomena. Civilization breaks down in the wake of earthquakes, super storms, meteor strikes, plague and, just for good measure, the rise of supernatural creatures.


If you watched Jessica Jones, then you’ve already met Mike Colter’s Luke Cage. He’s just this guy with super strength and unbreakable skin trying to run a bar in peace but, of course, that’s not going to happen as he must “confront his past and fight a battle for the heart of his city.”

All episodes of Luke Cage will be available worldwide on Netflix starting September 30.


It’s a western but with robots, crazy robots.

The show’s pedigree is what has most folks excited. J.J. Abrams (Star Trek, Star Wars) and Jonathan Nolan (The Dark Knight, Interstellar) produce the show based on the original novel by the late Michael Crichton (Jurassic Park, Twister).

Set in an adult-oriented robotic theme park, the tale hinges on the dawning of artificial intelligence in the face of the worst of humanity’s vices. It’s a dark bunch of tourists they’ve assembled so maybe the robots aren’t the crazy ones after all.


This one’s premise is familiar, a bad guy steals a time machine and gets chased by a team of good guys who try to stop him from messing up the past.

While Eric Kripke (Supernatural, Revolution) and Shawn Ryan (Angel, The Shield, Last Resort) form a solid production team, does anyone still have faith in NBC, as a network, to deliver on the promise of a solid premise? Remember Revolution, Constantine, Heroes Reborn, The Event, Journeyman, Earth2, Awake, Surface…


A reboot of the 2000 film, Frequency follows a police detective who discovers she can talk with her dead father via a ham radio. They start working together on an unresolved murder case, but immediately start messing with causality and futz up the current timeline.

The show stars Peyton List. Fans of The Flash will recognize her as Lisa Snart (Captain Cold’s sister). Jeremy Carver (Supernatural, Being Human) is executive producer and wrote the first episode.


It’s a little bit like the Dean Koontz book Strangers meets the Wachowski’s Sense8. Three strangers start dreaming separate parts of the same dream. This subconscious collective helps each of them in their real world efforts. All three are searching, one for his missing girlfriend, one for her lost child and a third is looking for a cure for his catatonic mother. As the story progresses, they begin to realize their shared dream may be the key to the fate of the world.

The show was conceived and written by the late Henry Bromell (Homeland, Homicide: Life on the Street) and Blake Masters (Law and Order: LA, Brotherhood). Gale Anne Hurd (The Walking Dead) is also producing.

The first season finds the holistic detective (Samuel Barnett) in Seattle with a reluctant sidekick named Todd (Elijah Wood) and a rather resilient Welsh Corgi. Together they face a holistic assassin, a cult, a biker gang and other weirdness. This series marks Landis’ first time as showrunner. He had veteran producer Robert C. Cooper (Stargate: SG-1, Atlantis, Universe) at his side throughout.


Augustus Prew (Ass Kicker from Kick-Ass 2) plays a tech bazillionaire who decides to open a hospital full of bleeding edge tech.  To run the place, he finds a brilliant but damaged surgeon (Dermot Mulroney) with questionable ethics and crazy ideas about how to heal folks.  Thus we have HOUSE with lasers but without the limp.

The guy behind the TV version of Friday Night Lights (Jason Katims) created this one.


Because being abducted by extraterrestrials and subjected to all sorts of unspeakable probes is funny, TBS has created a comedy about an alien abductee support group. The show picks up as a skeptical reporter (The Daily Show’s Wyatt Cenac) infiltrates the group to write about the members’ alleged encounters.

TBS is on a run of success with their most recent original sitcoms (Wrecked, The Detour) pleasing critics and Samantha Bee making headlines with her talk show.

People of Earth debuts on TBS Monday, October 31 at 9 pm.


Novelist and screenwriter Beth Szymkowski creates a classic tale of teens versus mutants in the wake of a chemical plant meltdown.

There’s not a lot about this show in traditional entertainment channels but, in the realm of social media, it’s quite buzzy. The cast is a mix of veteran teen actors and internet influencers/personalities.

Szymkowski was behind the racy young adult novels and web series Runaways that ran on the AwesomenessTV site back in 2012. Check out those old Runaways episodes. They’re especially relevant if you want to get some idea of how Szymkowski does teens and how AwesomenessTV puts together a show since they’re producing.

There’s no exact debut date yet, but we expect ten episodes of Freakish sometime in October.

‘Stan Against Evil’ – November 1 on IFC


This horror comedy finds John C. McGinley (SCRUBS) as a New England sheriff. Forced into retirement, he must work with his replacement to battle demons and protect his small town.

Dana Gould, a writer/producer on The Simpsons and a producer on Parks and Recreation, created the show out of his love for the genre. He cites Evil Dead II and American Werewolf in London among his influences so you can see where this one is going.

Stan Against Evil debuts on IFC on Wednesday, November 2 at 10 pm.

Incorporated is like Gattaca meets The Apprentice crossed with a terrorist recruiting video. While the haves have it all, the have-nots dare only to dream in this future drama from Pearl Street Films (Ben Affleck and Matt Damon).

Sean Teale (Skins, Reign) tries to infiltrate the upper echelon of an all-powerful corporation to save the woman he loves from an, as yet, undefined crisis. You can see from the trailer above that they’re going for that slick, Minority Report, tech look with driverless cars and the like.

Paul V. Rea
Paul.rea
A monster science created but could not destroy; Paul V. Rea is a radio, TV and web journalist based in Clarkesville, Georgia. Paul is addicted to television of all genres and can often be found mouthing off about things he sees @paulvrea on Twitter.