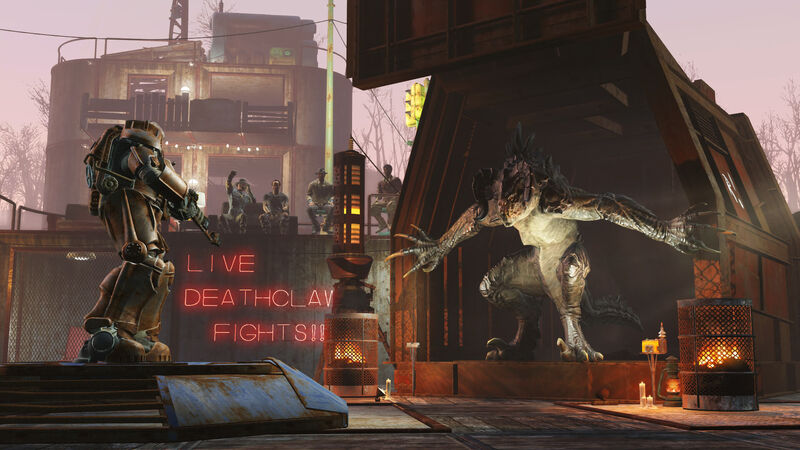 Fallout 4’s newest add-on, “Wasteland Workshop” gives players the chance to craft cages and arenas to house the dangerous creatures that run rampant across the Wasteland. Not only can players utilize these creatures in fun creature vs. creature matchups, they can also be trained to defend your settlements. Specific creatures will add a defense boost to your settlement, or even raise the happiness of its inhabitants!

Here are some pointers for capturing these deadly creatures, as well as some of our favorite settlement pets in “Wasteland Workshop.” Happy hunting!

These dangerous wasteland creatures are any settler’s worst nightmare. They have extremely high attack power, high mobility, and can terrify even the most seasoned adventurers. Deathclaws add  +10 defense to your settlement. Remember, by housing deathclaws your settlement will be prone to attack by groups of other deathclaws. Despite those disadvantages, deathclaws can mop up any human threat with ease! Just housing one or two would be enough to take care of waves of raiders or mercenaries.

Arguably the most enjoyable pet to have around your settlement is a gorilla. Gorillas can be caught in a cage and then released to serve and protect the settlement. They are docile by default, boost the settlement’s happiness, and add 10 points to the defense value, which is equal to a deathclaw!. However, the player character must have completed The Nuclear Option quest (with any faction) and given the evacuation order to be able to build the cage for gorillas.

The wasteland is filled with dangerous mutated animals. Thankfully, normal, lovable felines can be found as well. Fallout 4 is the first game in the series to feature domestic cats. They can be adopted as pets for settlements and will boost the happiness of the settlement. House as many as you like, but remember: they aren’t capable defenders.

This mutated species of black bear is a tough adversary any time you stumble across one in the Commonwealth. Yao guai will attack nearly any other creature or person they encounter on sight, including Deathclaws. When captured, they provide +6 to a settlements defense. There are a wide variety of specific types of yao guai, and it’s important to capture a variant that will be the most lethal. Some great choices are dusky yao guai, rabid yao guai, and albino yao guai.

Radscorpions are fast runners, extremely aggressive, extraordinarily well armored, and will use their powerful claws and poisoned tails to attack enemies quickly and relentlessly. When captured, they add +7 to the defense of a settlement. Their ability to burrow underground can also allow them to traverse great distances very quickly. Their mobility makes them a great first line of defense against threats. If you manage to capture a deathskull radscorpion, your settlement will have a formidable defender