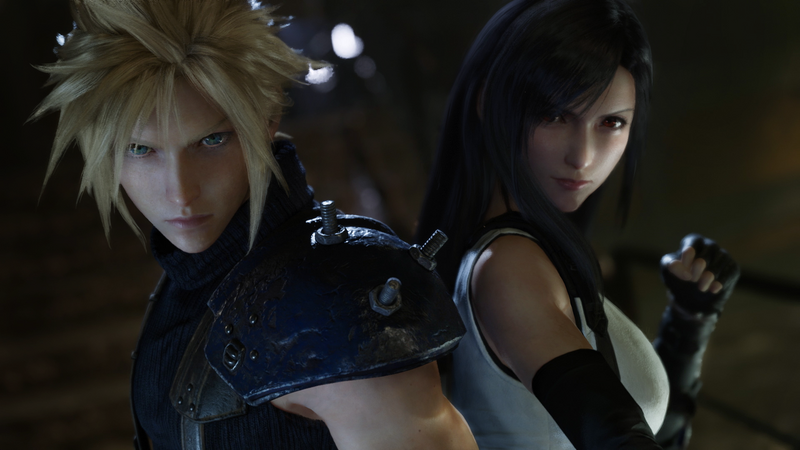 How do you improve upon perfection? It’s a question that must have caused producer Yoshinori Kitase countless sleepless nights in the six years he’s spent reimagining Final Fantasy VII. While the last decade has seen gamers thirstily lap up remake after shiny HD remake, the problem is Final Fantasy VII (FFVII) isn’t just any old videogame. Unlike most of its PS1 peers, 22 years and three console generations later, Square’s first foray into 3D is still considered one of the medium’s defining moments.

Boot up the original today and it’s not hard to see why. Like pop culture gems Blade Runner and Akira before it, everything about FFVII feels effortlessly iconic. Whether it’s the sprawling steampunk dystopia or its (depressingly) relevant story about climate change, FFVII’s Midgar is a world that instantly draws you in. And, to what must be the publisher’s endless frustration, it’s also an artistic achievement that Square simply hasn’t been able to top.

In fact, the weight of this blocky-looking behemoth’s legacy is so great, it’s taken several studios over half a decade to decide how best to approach this remake. But now, Final Fantasy fans you can breathe a sigh of relief — because it’s almost here.

Thanks to the jaw-dropping scope of this high-definition reimagining, instead of getting a single release, FFVII redux is going to be split into a number of large-scale episodic adventures. With the release date for the first chapter now revealed to be only months away, I sat down with producer Yoshinori Kitase to find out what’s been going behind the scenes for the last six years.

“When it comes to our philosophy of development and our approach to making the FFVII Remake, the first thing that we asked ourselves is what do we want to show, what do we really want to depict in this game?”

It’s no surprise that Kitase has taken this all so philosophically. As someone who worked on the 1997 original, the world of Midgar is one that is obviously close to Yoshinori’s heart. Uninterested in just churning out a prettied-up port, he and his other PS1 alumni decided that if they were going to revisit Final Fantasy VII, this new remake had to be worthy of its legacy. It had to feel just as fresh and relevant as the original did all those years ago.

“The core development team is made up of a number of people who worked on the original FFVII, including myself, director Mr Nomura and Kazushige Nojima.,” Kitase explains, “We very much felt that if we were just going to recreate the original with new, modern graphics, that wasn’t enough to get us excited — or even to get us involved with — the project. To really get back into FFVII, we had to go beyond the original and tell the story in a much deeper way. We had to provide players with a modern, fresh gaming experience.”

Yet, as great as it was getting the old gang back together, Kitase knew that if this project was to feel truly modern, they’d need to get some new blood on board:

“Our core team of development staff oversees a younger, brilliant team of very international development talent. A lot of these people were just players when the original came out…”

First announced in 2013, much of the development of Final Fantasy VII Remake was originally farmed out to an external studio: fighting game veterans, CyberConnect2. But as the scale of the project continued to grow, 2017 saw Kitase and the team take back the reins and devote their full attention to reimagining the RPG that put them on the map all those years ago. For Kitase and co, this remake isn’t just about peering back into Final Fantasy’s past – it’s shaping the series’ future.

“We are now very much approaching this as if we are developing the next, main, numbered, Final Fantasy game,” explains Kitase, “When you talk about [the mainline entries in] the Final Fantasy series there are three core concepts that we follow. The first is innovation, the second is pushing boundaries and the third is surprising the player at every turn. The FF7 Remake definitely shares these core values.”

While that could easily just be marketing fluff, after being shown an extended look at the game’s opening, the sheer scope of this remake suggests that Kitase means every word. Split into multiple episodes, this highly detailed remake looks to do more than just retell the same story. This time around, the team are attempting to greatly expand upon the world of Midgar and the believability of its inhabitants. In fact, Kitase goes on to surprise me by confirming that “each game in the project will have a volume of content comparable to a standalone numbered Final Fantasy in its own right.”

Every Cloud Has a Silver Lining

While remakes have been big business for at least a full console generation now, it’s rare to see a studio taking a reimagining of a retro classic as seriously as its next cutting-edge sequel. Still, we know what you’re thinking. It’s hard not to be a bit skeptical when Square’s once standalone release is now being drip fed across (a yet to be confirmed number of ) full-priced episodes. Although this is undoubtedly going to make the publisher enough money to run a small country, Kitase insists that the decision to release Remake episodically was a creative one — not commercial.

“We really wanted to go above and beyond what you’d expect from a standard remake, to delve that much deeper into this classic and the world and characters that feature in it. But in order to realise this world at that kind of scale, we really did have a massive volume of work to do,” reflects Kitase, “So, this episodic approach allows us to remake the original without having to cut down on anything that the fans loved about the original game…. There’s a huge amount of data squeezed into this game. The result of this is that [the first game] now spans a two Blu-ray disc set.”

Watching (and then later playing) a brief snippet of the new Remake, my skepticism quickly fades. Somewhat expectedly, Remake is a technical tour de force, yet it’s the little touches and subtle changes that really breathe new life into Midgar.

“The lighting and the colouring and the effects that we’ve used throughout Midgar are really subtly tuned to express what makes it uniquely Midgar, what makes it FFVII,” explains Kitase, “We’re not aiming for pure photorealism for its own sake but for more of a hybrid style, one that really respects and brings out the creative ethos and creative decisions from the original.”

Thanks to a combination of mo-cap, VO and satisfyingly seamless transitions between gameplay and cutscenes. This time around, there’s a much greater focus on characterisation, with expanded dialogue and believable facial expressions bringing these iconic characters to life in a way they simply haven’t been before.

“In the remake, there really is a greater emphasis on the characters, their expressions and on the storytelling [than there was in the original],” says Kitase, “Back then we didn’t have voice acting, no kind of motion capture/performance capture technology… and there really wasn’t much detailed camera work outside of the cutscenes themselves. We’re using a lot of this new technology to make the characters more expressive and to really ramp up the level of immersion.”

Yet for longtime fans of the series, one aspect will definitely not be music to their ears — the game’s new voice cast. While the original PS1 release didn’t feature the memory to include voice acting, FFVII has birthed a rich lore. It’s spawned a whole series of spinoff games, CG movies and anime, and those fans have grown accustomed to a consistent cast. Kitase, however, believes that in order to see new depths to these beloved characters, they need a fresh start too.

“Using a new generation of voice actors we think will provide the best experience both for longtime fans and those new to the series,”.

Thanks to countless delays and the unbearable weight of fan expectation, it seemed almost impossible for a remade FFVII to live up to the hype. But after sitting down with it, somehow, this remake really does manage the impossible — it makes a 22-year-old adventure feel fresh again.

It’s less a cynical exercise in nostalgia, and more about updating an aging classic for the modern era. From the gorgeous rendering to the surprisingly satisfying combat, dare we say it, Square’s second run at this iconic RPG might just be its best game yet.