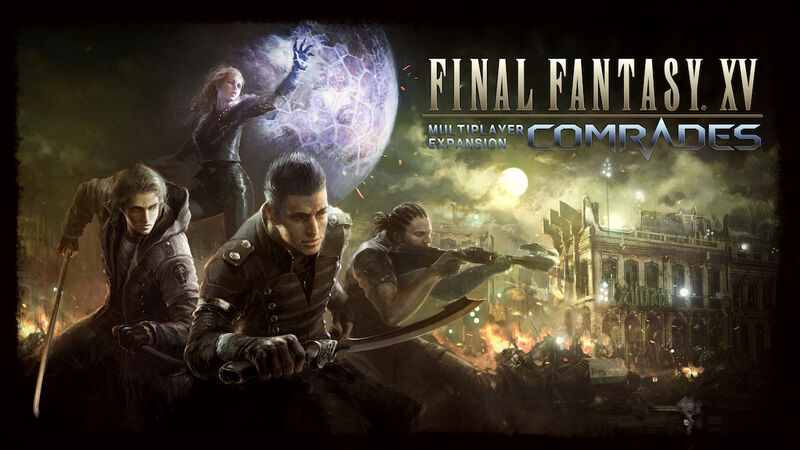 The Final Fantasy franchise isn’t a stranger to multiplayer. The main numbered series has two MMOs in its line — Final Fantasy XI and Final Fantasy XIV — but none of the other games dug past a single-player experience. So naturally fans were somewhat surprised to hear that Final Fantasy XV would be getting a multiplayer expansion of its own. And while it may look like a bid to grab extra cash following the game’s release — as so many recent games have done — it’s apparent that’s not the case once you start playing.

The events of Final Fantasy XV: Comrades pick up following the ending of Chapter 13 of Final Fantasy XV. Noctis has fallen into what will be a decade-long slumber, and meanwhile, the wider world falls to ruin. In Comrades, you wake up with no memory and are told you are a member of the Kingsglaive, the elite magic-wielding soldiers that protected the capital city of Insomnia and its kings. But with King Regis dead and Prince Noctis missing, that point is moot. Instead, you’ll work to restore power to the cities still standing and keep the monstrous daemons now roaming the earth at bay. Essentially, the apocalypse has happened, and you are helping the people rebuild.

If you are unfamiliar with the term “Kingsglaive” and how King Regis died, you may want to go back and watch the film Kingsglaive: Final Fantasy XV. You’ll come across characters and concepts that are only really explained in the film, and armed with that knowledge you’ll have a bit of an easier time digesting Final Fantasy XV: Comrades.

Cleaning Up The Mess

Your time in Comrades kicks off with one of the more robust character creators we’ve seen in a while, almost rivaling that of the most recent Dragon Age game. You can alter everything from the width of your nostrils to the musculature of your shins — allowing you to either create a monster or painstakingly replicate your own looks. It’s a great touch that, if you go the latter route, immerses you further into the world of Eos. Plus it’s just plain cool seeing yourself in a Final Fantasy game.

The customization options go so far as to allow you to pick your birthplace — one of four cities in the world of Eos — and this choice will determine your attributes. For example, choosing Insomnia as your home grants your character high magic damage and a large bank of MP.

The general layout of Final Fantasy XV: Comrades is simplistic but refreshingly concise. You’ll spend most of your time in the hub of Lestallum, where you can shop and select which missions to undertake. You’ll have several types of missions to choose from: either defending something, moving from point A to point B, escorting, or killing waves of enemies in a mini horde mode. There are also Urgent quests, which square you off against the biggest, toughest bosses Comrades has to offer.

Each mission will reward you with gil (money), experience points for leveling up, and meteorshards. The latter are converted into electricity to power the city. As you complete missions, you’ll use that electricity to power up shops in Lestallum and unlock new areas on the world map featuring new quests. Sometimes you’ll need to complete a mission more than once to gain enough shards to power up a location, but luckily all missions are fairly short, preventing tedium from setting in.

This game loop seems overly simplified and tedious, but by completing more missions and unlocking more of the world, you are rewarded with more story content and a chance to see your favorite characters from the main game. Final Fantasy XV: Comrades has its own small narrative that is uncovered through single-player missions, so there’s still fun to be had if you’re not the kind of person who likes playing online. You can also complete all co-op missions using AI companions if you’re really anti-online.

This double loop of unlocking areas and being rewarded with story is a great way to encourage progression. You really feel like you’re achieving something, digging away bit by bit at the daemon problem and uncovering more about the Kingsglaive and what’s going on with the remaining cast of Final Fantasy XV in the process.

Combat here is a little different than the main game, and a lot simpler. You can use your weapon to attack, cast a magic spell, warp strike, cast a healing spell, parry, and initiate a chain attack with your teammates. That’s it. There are no restorative items so you have to rely on your own or your teammates’ healing.

Thankfully there are many different weapons to choose from, and each comes with a different fighting style, as you’d expect. You can also equip your weapon with materials you’ve collected in combat that hold elements — fire, ice, ex. These will add an element to your attacks. Or you can use materials that add passive abilities, like an increased chance to block damage or a damage boost.

The Weapon’s The Thing

Combat may be simple, and it takes quite a bit of time to level up. That part’s a bit of a letdown. But how you customize your weapon will make or break your success rate out in the field, and it’s this system that I found the most joy in with Comrades. It’s satisfying to have a part of your character’s function be made your own, tailored to your style and evolving with your time in Eos.

The online interface is also pretty bare-bones. You’re always the only player in your Lestallum hub, and you can only interact with other players out on online missions. But thankfully, everything you earn is earned through gameplay; there are no loot boxes, no microtransactions, no way to spend real-world money to jump ahead of the curve. And in the current gaming landscape, this kind of purity is refreshing. I know that every time I log in, I will have to earn the weapons and accessories I want and that everyone else I’m fighting with has put the time in to earn that, too.

This sense of impact also bleeds into your collection of meteorshards. You feel like you’re progression, that you’re actually doing something worthwhile, by only having gameplay to unlock new areas. You can’t just pony up cash for shards and have the whole map available to you — you have to earn it. And that need to earn, couple with oppressively dark atmosphere and tone of Comrades, really drives its core themes home: you’re part of the last bastion of humanity. You must all get your hands dirty and work together, or you won’t survive.

In the end, Comrades feels like the missing puzzle piece of Final Fantasy XV. Not only does it plug a narrative hole, it does so with coherency and commitment to its end-of-the-world bit. Yes, the multiplayer itself is over simplistic and you can actually play the expansion without interacting with others — but then you’re missing the point of story Comrades is trying to tell.

The weapon customization is outstanding, and the character creator is surprisingly deep. And if you’re on the Final Fantasy XV train, the ability to become part of the history of Eos is a wonderful get. Things may get repetitive at time in Final Fantasy XV: Comrades, and while you may not spend 100-plus hours running around killing demons, the 20 or 30 you do spend are well worth your while.