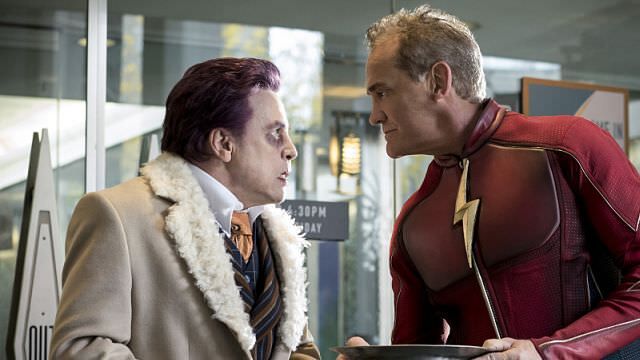 ‘Flash’ Recap and Reaction: “The Present”

With aliens on the way, Barry Allen called upon Team Arrow, the Legends, and even the Earth-Thirty-Eight Supergirl to help combat the threat. Combining their abilities, the ultimate team of heroes was able to save the planet and repel the intruders. If there is such a thing as karma, the Flash deserves a break. But Savitar is still out there, and Alchemy is ready to do his bidding as Christmas comes to town.

Julian Albert, now known as Alchemy, has a deeper connection with Savitar than we thought. Four years ago, a ‘voice’ drove him to the Indus Valley in search of something. He finds hidden within a box, a nexus of blue energy. I’m trying not to see an Indiana Jones reference, but it’s tough with the cowboy hat and mystical items.

Now in the present, HR has decorated S.T.A.R. Labs with enough tinsel to blind Santa and light the way to a paper on a certain glowing rock by one J. Albert Desmond. ‘Albert Desmond’ being the name DC Alchemy goes by. It appears that Julian funded his expedition using his future inheritance. Claiming to have found nothing, he moved to Central City. Pushing for a Savitar connection, Barry learns that Savitar might not be a speedster god, but he was the first speedster.

Over on Earth-Three (why is it that only our Earth lacks zeppelins?) a certain fellow tricks the local Flash into a death-trap. With John Wesley Shipp and Mark Hamill portraying the original Flash and Trickster back in the ’90s, let’s enjoy this little homage as Barry comes to the rescue.

The mere mention of Savitar is enough to chill Jay. Nobody has ever seen Savitar but the legends say he sends a predecessor to pave the way. Now there is a speedster fast enough to threaten his reign; Jay joins the fight.

Training with HR is revealing some fantastic results as Wally is progressing much faster than Barry did, and Jay reminds Barry to enjoy time with his family. Between Cisco swapping Christmas stories with Caitlin and Iris snuggling down with Barry, it comes up that the evil British guy might actually be a villain. When an alarm comes in for Alchemy, Wally reveals his training but is benched yet again.

Despite attempting to deal with Savitar as Barry retrieves the Stone, Jay is little more than a punchbag to the first speedster. Shockingly, it appears that Savitar actually knows his name. Right before Jay can get stabbed through the chest, the Philosopher’s Stone is put back into its container and Savitar vanishes. Unmasking Alchemy as Julian, the Flash takes him under custody in the pipeline. But, much like the original Desmond ‘twins’, it appears that Julian knows nothing about Alchemy.

Julian genuinely believes his innocence, but that is far from the biggest problem — the box containing the Philosopher’s Stone doesn’t exist. It might be sitting there, but it doesn’t show up on any scans or gizmos. Freaky. Realising that Julian might be in two minds about Alchemy — one evil and one innocent — the Flash drops his mask to ask some questions. When Julian was 20, his sister died for a time. But then Emma started to appear to him with knowledge of the Stone. Up in his lab, Cisco is tormented by visions of his brother and told to open the box. Damn you Pandora; now Savitar is here.

Savitar begins smacking Barry around the Speed Lab and Jay is unable to move with his current injuries. Enter Kid Flash, able to provide a convenient distraction. Despite ‘Dante’s’ pleading, Vibe closes the box just before the two speedsters in the lab meet their real maker. With no alternative besides opening the box, Cisco rigs up a machine to Julian to act as an intermediary to the god of speed. Savitar reveals he knows the future and gives horrifying hints before revealing that a future-Barry trapped him somewhere. Time travel is making things difficult to follow.

With little recourse, Jay decides to throw the Philosophers Stone into the Speed Force. Lacking a conduit to return by, Savitar will be trapped in his prison. Working together, the two Flash’s manage throw the box through a wormhole with Barry caught in the wake. He awakes in the future to see Savitar kill Iris with his future self, helpless to stop it. A hand suddenly drags him back to the present and Jay reveals how he just witnessed the future. With only six known speedsters (including Thawne, Zoom, Jesse and the mentioned-only Earth-Nineteen Flash), Jay sure knows a lot of rules for their kind. Right up there is not travelling to the future.

Having just saved the world, HR riles up their Christmas spirit. Amazingly, Caitlin attempts to rope Julian into the West family festivities but — typical depressing Brit that he is — Albert (or shall we start calling him Desmond?) declines.

Team Flash decide to give a very special present — a Kid-Flash uniform for Wally West. Despite all the odds, Julian turns up with an equally significant gift for his new friend. Since Barry saved his sanity, he put in a few words with Captain Singh. Paperwork is a slow business and CSI Allen has not officially retired just yet. Risking her own sanity, Caitlin decides to make it a white Christmas and frosts over the rain outside. Let it Snow.

With five months left until the death of Iris West, Barry decides to take a big step in their relationship — an apartment just for the two of them. With two competing futures – Reporter West-Allen and widower Barry – this is either a lovely investment or fruitless waste of money.