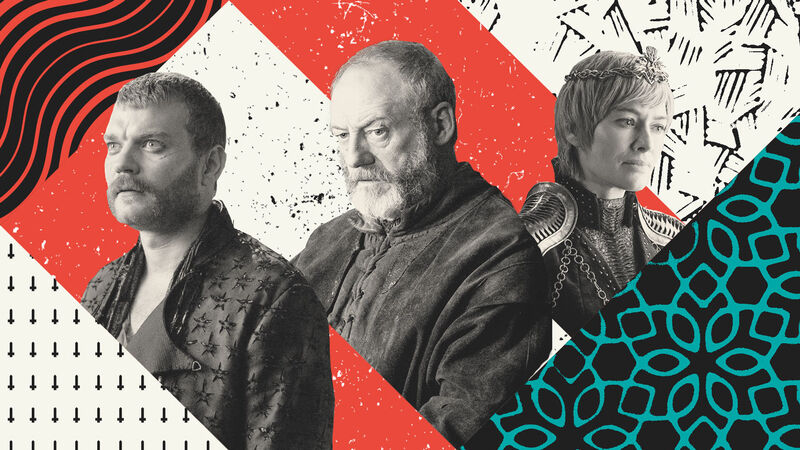 ‘Game of Thrones’ Death Pool: Who Will Die in Season 8, Episode 4?

After the first two episodes of Game of Thrones Season 8 had gone easy on the characters, the assumption was that last week’s huge Battle of Winterfell would result in plenty of death. And while some felt that things would get even more dire, there still was indeed a big death count, with no less than seven notable characters – yes, we’re including the ever-silent Night King – meeting their maker by the end of the 82-minute installment.

With that battle over, will this week find a respite from death? It’s certainly possible this could be a bit of a breather, before we go into the final two episodes of the series. But you never know on Game of Thrones.

We polled Fandom’s Game of Thrones community and asked who was most likely to die in the fourth episode of Season 8. The “winner” as we post this story is everyone’s least favorite uncle…

The most votes by far this week went for the soggy, snarky Euron Greyjoy. He may have brought Cersei her much-desired Golden Company, but few think Euron is in a safe spot – even as he shares Cersei’s bed, it’s clear she has no affection for him.

Euron had a relatively late introduction to Game of Thrones, but while he went big from the start – killing his brother and proclaiming himself the rightful king of the Iron Islands – he has made few true allies along the way and sides with a woman pretty much every other character sees as an enemy. So will be the next casualty?

Should we say goodbye to Euron on Sunday, we’ve prepared an obituary for him…

Euron Greyjoy grew up in Castle Pyke in the waning years of the Targaryen dynasty. Once that noble house fell to Robert Baratheon, Euron’s elder brother Balon declared himself the King of the Iron Islands. Euron himself led the Greyjoy Rebellion’s fleet in the Raid on Lannisport which saw the entirety of the Lannister fleet burned while anchored in their harbor. Despite this victory, the Greyjoy Rebellion would ultimately fail. Euron went into exile rather than bend the knee, spending the next several years traveling the world as a pirate.

Ever opportunistic, Euron returned to the Seven Kingdoms from beyond the Jade Sea in the aftermath of the War of the Five Kings. With Westeros in turmoil, Euron returned to claim to the Salt Throne after the untimely death of his brother Balon. Euron would later take credit for his brother’s death, claiming Balon needed to be taken out of the equation, to the agreement of the other Ironborn lords. After Euron ousted his niece Yara Greyjoy and her brother Theon during the Kingsmoot, the younger Greyjoys fled the Iron Islands in rightful fear for their lives. They would remain traitors to him until his dying breath.

Allying himself with the Lannister queen, Euron and his fleet brought Cersei a decisive victory against Daenerys Targaryen. The Ironborn ships destroyed the Targaryen fleet and Euron captured or killed many high-profile Dornish women, including Ellaria Sand. Euron further ingrained himself to the Iron Throne by providing Queen Cersei with 20,000 fresh troops. The Golden Company, bought and paid for to protect King’s Landing from any and all pretenders to the throne. Euron hoped to take his place as King Consort to Queen Cersei after defeating the final vestiges of House Targaryen. Alas, it was not to be.

Euron Greyjoy is preceded into death by his brother Balon and his nephew Prince Theon Greyjoy. His leaves behind no wife nor heirs of his body. With this, the male line of House Greyjoy is dead.

Below is a sampling of comments the Fandom GoT community left with our poll, including who they might choose among those “Other” selections. As it turns out, many feel this is another week where death will take a break.

“Nobody. I think it will be an episode with no named character deaths.” – MisterWoodhouse

“Maybe daenerys but I don’t have a clue” – Khaleesi emeline

“No one will die” – Chanka Jayaweera

“Jon. Cuz I want him to live so bad.” – Dirk Gibbonson

“No one will die. Episode Four will be a transitional episode. Strategies and allegiances will be outlined.

I’m curious to see how Dany will cope with the blow that the army of the death has struck on her once vast forces. The Dothraki and Unsullied are all but wiped out.

They must hope word of their ‘victory’ doesn’t reach Cersei, or she could just march North and strike the final blow.” – TimDevloo

“Jamie or Tyrian because bron is due to turn up soon after Cersei sent him to kill them both.” – Connorjenkins5

“I don’t necessarily think they’ll for sure kill someone next week. I think everyone will be so focused on getting their troops together and the north will be celebrating etc that not much battle (if any) will happen. Buttttt I voted Euron bc I think we’ll see him die soon” – Kirby Woodall

“Why do I feel like Varys is about to die next episode?” – JVeronLN

“No one most likely dies here, they’ll grieve, bury their dead and plan assertive action to end and win the last war. I do think, however, that Daenerys and her army will reach king’s landing before the end of the episode; both parties just gazing tensely at each other’s armies, just like we saw in episode 2 at the end.” – Mywatchhasended