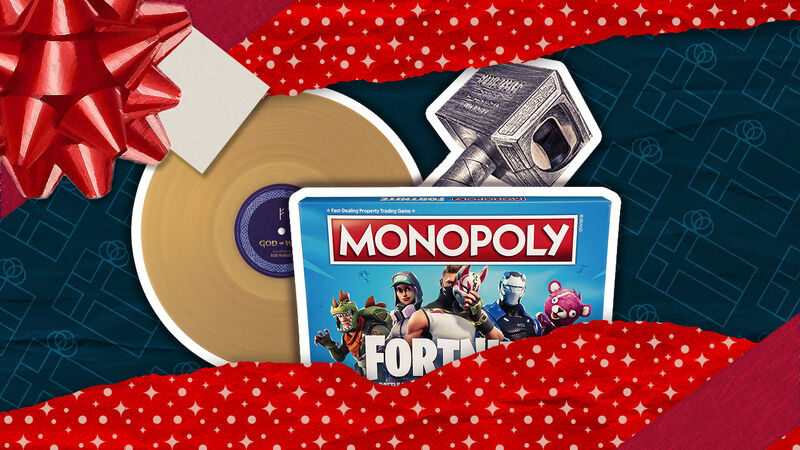 With the holiday season upon us, you might be thinking about that gamer in your life. Or the beer enthusiast. Or the TV addict. Or even – someone who’s all three!

Yes, maybe your life has its own version of “Bro Thor,” and you’ve been racking your brain trying to find a perfect, and affordable, gift for them.

In the spirit of Thor, Korg, and their New Asgard adventures, we’ve compiled a list of the coolest presents you can give someone who’s chatting with (or yelling at) online noobs while downing steins of ale.

Your friend might not be worthy enough to wield Mjolnir in battle but they’re probably a decent enough person that they can use a mini-Mjolnir to crack open a cold one.

This teensy Mjolnir bottle opener, from VNFLY, might not fly into your hand when you call for it, but it’s small enough to keep on you and useful for any and all non-twist off occasions.

Since your friend is probably way more into simulated fights that real ones, and because sometimes it’s just freakin’ fun to wear a cool helmet and pretend you’re an X-Wing pilot, Hasbro’s got this awesome anti-Empire replica helmet with surround sound “pew pew pew” battle noises.

Wearers have the choice of running the Battle of Yavin in an X-Wing or the Battle of Hoth in a Snowspeeder. AAA batteries and the warm paternal love of Odin not included.

If you really want to celebrate after a hard-fought victory, and toast the immortal champions in the halls of Valhalla, then nothing other than a 20 oz medieval style ale horn will do!

Authentic, safe, and cool(the big three!), this mead horn make a mean gift to any fan of Thor, Game of Thrones, Vikings, or just awesomeness in general.

What’s better than gaming for you pal? Well, how about unlimited gaming?

When you switch to Boost Mobile, you’re instantly gifted with unlimited gigs. That means, non-stop videos, music, and gaming. And no one would ever want to have to tell your pal they had to stop doing something simply because they ran out of data.

With original artwork by Jeff Langevin, this limited edition press will not only satisfy music lovers but also those wanting to re-live the game’s most powerful moments. Boy.

You won’t make the mistake of thinking Hulk and Rocket are there to fix your cable if you’ve got a year-long subscription to Disney’s hotly-anticipated streaming service. Not only can you do a deep dive into the MCU, and check out hilarious hits from decades ago, but you can re-experience a different type of Scandinavian adventure: Frozen!

Speaking of Frozen, you know who also once shunned all of society and became a shut-in? That’s right: Elsa! And what better way to connect to Norway than by meticulously building it in tiny brick form? Look at this awesome little Arendelle Castle Village – It’s like New Asgard! There’s a boat, to bring in all sorts of food, beverages, and adult beverages and a mini-market, for selling said food, beverages, and adult beverages. And there’s a cat and some birds who’ll watch you live your life with little-to-no judgement.

Tired of Korg being the only cool pile of rocks in the room? Check out this super stylish beer coaster set.

Just let these rocks chill out in your fridge or freezer and you’ll have some mighty fine stoops for your suds. Each round of beer will be perfectly chill-axed for your frothy enjoyment.

The gamer you know probably already has a pretty boss chair from which to shoot bullets, fire missiles, and weird dark sorcery…but do they have a cape to go with it?

Marvel might not make an actual Thor branded gaming chair just yet, but you can swoop in and scoop up a Thor chair cape from Entertainment Earth. [cue Led Zeppelin’s “Immigrant Song”]

Perfect for multiplayer or, you know, when you might require a God of Thunder to threaten NoobMaster69, this sound pad provides a unique way to communicate in online games or party chats by sending fun sound effects over voice chat.

Now…what’s the button for “I’ll rip off your arms and shove them up your butt?”

We’re guessing your buddy loves themselves some Fortnite, but maybe they want to try unplugging for a little while. Maybe they want to kick it old school with a magnificent game of Monopoly.

Now you can weave both worlds together with Fortnite Monopoly! Based on the video game, this version isn’t about how much wealth you can accumulate – it’s about how long you can survive. Claim locations, battle opponents, and avoid the Storm to win.

A gamer’s gotta eat and sometimes that means eating more than just handy snacks and sweets. Yes, an actual full hot meal is required every now and again so what better place to get recipes from than the Fallout Cookbook?

Soups, stews, sides, and – er – Spiced Mirelurk Meat, this book has everything a vault dweller would crave. Outside bad, inside good.

Treat your Thanos-hating pal to this cool new dark fantasy game, based on Norse mythology, featuring a Pict warrior battling her way to the underworld in order to rescue her love from Hela. As we all know, Thor included, Hela can be a bit of a pain.