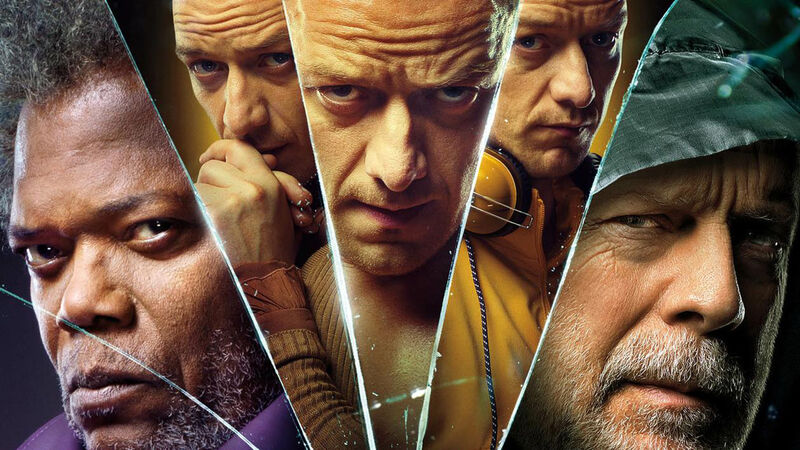 ‘Glass’: How Shyamalan Shatters the Limits of the Superhero Movie

SPOILER WARNING: The following post contains SPOILER for ‘Glass’. Proceed at your own risk.

“Delusions of grandeur” is a phrase that gets tossed around repeatedly in Glass. As everyone knows by now, M. Night Shymalan’s latest unites two of his previous films – downbeat superhero origin drama Unbreakable (2000); and psychological horror/thriller Split (2016). This new, so-called ‘Eastrail 177 Trilogy’ is named after the derailed train in Unbreakable that killed all onboard but Bruce Willis’s David Dunn, leading him to discover that, physically, he was… well, see the title.

To take two such disparate films, linked only by a last-second Willis Split cameo to prove both take place in the same fictional universe, and confidently splice them to create a third, low-budget, high-concept superhero sequel/crossover of your own characters, as if it were the most natural hybrid in the world…. Let’s just say it takes a filmmaker with a certain level of ambition and self-belief to even attempt that in our comic-book superhero-fixated cinematic universe.

That’s surely where we exist right now, for better or worse. Six of the top ten of 2018’s record global box-office are superhero movies, and all, bar Pixar’s Incredibles 2, are properties of the two comic-book titans, Marvel and DC. Last year was a similar story, with six in the top 15. Given such hegemony, at least there’s a recent discernable attempt to broaden out and diversify these tales: introducing more female and a wider ethnic blend of heroes (Wonder Woman, Black Panther, Spider-Man: Into the Spider-Verse); and varying tone and texture, from neo-noir/Western (Logan) to knockabout buddy movie (Thor: Ragnarok), plus meta-comedies like Deadpool or The Lego Batman Movie.

And yet… there’s also an inbuilt, overall uniformity to the various character tropes, story beats and stylistic guidelines on offer. Whether it’s the infinite reset required by the most popular characters (see numerous Batmans, Supermans, Spider-Mans), a certain enjoyable if predictable wise-cracking humour, or the inevitable VFX-heavy, mass destruction finales. These are entertainments on steroids: bigger, louder, longer.

Which is where M. Night Shyamalan comes in – or rather, doesn’t. Since the blockbuster success of 1999 breakthrough The Sixth Sense, he’s been at his most effective charting intimate family stories with a supernatural or genre-inflected twist (and boy, does he love those twists). His follow-up, Unbreakable, is about as atypical as a star-led superhero movie could be. The subdued colour palette, controlled camera moves, methodical pacing (the first 15 minutes feature about as many cuts) and melancholy ambience echo European arthouse cinema far more than Hollywood action cinema.

It’s a film that doesn’t just honour the legacy of comic books, calling them “our last link to a way of passing on ancient history”. It’s also, in Samuel L. Jackson’s obsessed mastermind villain Elijah Price (aka ‘Mr. Glass’), a warning about those who take their infatuations a little too far. Shyamalan isn’t saying explicitly there are dozens of fragile Glass-ist psychos at every Comic-Con, but he is flagging the dangers of fantasist fanaticism. And all of this, mind, well before the geeks, and their comic-book heroes, inherited the cinematic Earth.

Unbreakable took an unbelievably bold, stealth approach to a genre hitherto more defined by flash and dash. Perhaps predictably, The Sixth Sense’s critical and commercial lightning-in-a-bottle did not strike twice. Metacritic aggregates a fairly uninspiring overall rating of 62, with not a single contemporary five-star take among them. Of the 31 reviewers polled, 18 are positive, versus 13 mixed to negative (and 11/2 split). Rotten Tomatoes isn’t much better, offering a 69% Fresh score, though its Audience Score is an improved 77%.

What’s fascinating, then, is the shift in perception. I’ve lost track of the number of critics who now cite Unbreakable as Shyamalan’s best, and a modern classic. And I believe much of the film’s retrospective love stems precisely from an appreciation, in an age of unrelenting big screen superheroics, of just how daring and different it always was.

But this is also Shyamalan’s brand style. Unbreakable cost a hefty $75 million in 2000, and yet it’s as reluctant to go big as David Dunn initially is to explore his powers. Dunn tests himself by lifting weights in his basement, not leaping tall buildings. The climactic stand-offs come in a one-on-one suburban house brawl, and an off-screen arrest. No cities are levelled, no one can fly. OK, Dunn’s ESP-like intuition veers more supernatural, but ultimately this is a superhero movie that’s, quite literally, grounded in reality.

Which brought us, 17 years later, to Split. A career salvager, made with low-budget maestros, Blumhouse, it plays for 80% of its running time as a kinked abduction thriller, with James McAvoy’s Kevin Wendell Crumb, who has a condition known as Dissociative Identity Disorder manifesting itself as 23 different personalities, eventually succumbing to an identity called the Beast. Shyamalan latched onto the phenomenon of DID patients apparently being able to change their body chemistry. The Beast seems, like Dunn, to have abnormal physical capabilities, able to climb walls and kill people with his bare hands in a python-like grip. ‘Hulk, Squeeze!’ if you will.

Dunn’s backdoor Split appearance may be a shock, but Shyamalan has maintained that the Beast was featured in early drafts of Unbreakable’s script, before being dropped to allow more focus on Dunn and his family. And in terms of the Beast’s level of powers, there’s a certain, reality-based consistency here.

Split also elaborates on an idea present, but not overly stressed, in Unbreakable: namely that the manifestation of such abilities is a direct reaction to experiencing trauma. Kevin’s childhood suffering, losing his father and being abused by his mother, triggered his multiple personalities and subsequent evolution of the Beast, who, ultimately, is kind of an avenging angel of damaged souls. He spares Final Girl Casey when he realises she too is a survivor of childhood abuse. True, his method of vengeance also involves taking those who he deems “impure”, namely Casey’s two innocent classmates, and killing and, er, eating them. But hey, nobody’s perfect.

M. NIGHT THROUGH THE LOOKING GLASS

Glass, then, has been set up as the logical next step and conclusion to a superhero trilogy no one even knew existed. Trailers and marketing seem to promise your traditional superhero vs. villains (“this is where the bad guys team up,” Jackson tells McAvoy), and, ultimately, audiences don’t care that Shyamalan has a fraction of the resources of an Avengers or Justice League production. All they know is, he’s competing in the same arena. But… what if he’s playing a different game altogether? [Major spoilers from here on in – you have been warned…]

It turns out that Glass is out to subvert pretty much every superhero movie you’ve ever seen. Capturing Elijah, Kevin and David in the same psychiatric hospital, Dr. Ellie Staple wants to convince them that their so-called powers don’t actually exist, and can all be explained away rationally. She wants to cure them of their “delusions”. Meanwhile, Mr. Glass plots to escape and unleash the Beast upon the world at the opening of the city’s prestigious Osaka Tower, and convince David to stop him. It’s the classic set-up for the big pyrotechnic finale – and a magazine branding the Tower “a true marvel” is surely a dig at Kevin Feige’s studio’s typical climaxes.

TWISTING THE NIGHT AWAY

But then: Twist! Although it’s revealed that Kevin’s father died in Unbreakable’s train wreck, so effectively, Elijah “created” the Beast and David, Glass was bluffing about his plans. Twist! Dr. Staple belongs to a secret order tasked with keeping balance in the world and superhumans hidden from the public – “We can’t have Gods among us,” she solemnly intones. Twist! The organisation unceremoniously kills Elijah, Kevin and David to maintain their cover-up. But – final Twist! Glass has anticipated this move, recorded the whole thing and now Elijah’s mother, David’s son and Casey send this footage out into the world to await new superhumans revealing themselves. Cue end credits.

Uh, did you just set the big showdown to a film trilogy… in a car park? Did you just kill off all your major characters – and permanently, unlike so many comic-book storylines – including drowning the main hero… in a puddle? Did you just handover the storyline to a bunch of secondary, non-super characters?

We live in cinematic universes that tout superhero movies as soap operas. Each movie is just another episode in an ongoing saga that will either continue successfully, or, if it starts to wane, will be simply rebooted with a new face, and repackaged for a new audience. The ceiling is never reached, because you just keep on raising the roof, all while keeping fans primed in anticipation of an endgame that never truly comes.

Glass shatters that ceiling. Sure, it does so clumsily at times. Shyamalan also told Front Row that “my action sequences are the dialogue sequences”, when really these extended, repetitive conversations too often run the risk of becoming inaction sequences (it also doesn’t explain why the brief fight scenes are so poorly staged). Jackson’s meta-narrating during the final sequence, announcing “the collection of main characters”, or “the classic turn!” are eye-rollingly unsubtle. Elijah remains a ruthless killer, which makes attempts to turn him into a tragic victim problematic at best, and effectively contradicts Unbreakable’s warning about fantasy extremists. And the whole trauma-overcoming, redemptive love story between Kevin and Casey, some three weeks after a version of him psychologically tortured her and munched on her friends, frankly beggars belief.

But what Glass also does, is something almost no superhero movies do. In fact, what they are almost designed not to do: take the future power out of the hands of the corporations, and back into the heads of the audience. Blockbusters have to leave it all on screen, the money, the technology, the star power. Glass’s ending deliberately swerves this. Prospective sequels exist in our imaginations, and, if they ever appear, would start from scratch. It’s a deconstruction and rejection of the film franchise mentality, the dominant status quo – also represented by Dr. Staple’s shady group – that ultimately wants docile consumers satisfied with variations on the same old themes.

THINKING OUTSIDE THE BOX-SET

Change can be confusing, even alienating. That’s reflected in Glass’s mixed-to-negative critical response thus far: a paltry 42 aggregate score on Metacritic, or a 36% rating on Rotten Tomatoes, complete with lazy puns that “Glass is broken”, or “finally cracks”. Certain frustrations and criticisms of the film’s methods are understandable and, as shown above, even shared here.

But Shyamalan daring people to think outside the superhero movie box-set, especially in an ending that might strike many as fanciful, even outright stupid? Explicitly issuing a call-to-arms to find and express our better selves? Crafting, as Elijah reveals “an origin story” to begin once Shymalan’s trilogy ends, suggesting we ourselves might be the true potential heroes?

If these are “delusions of grandeur”, maybe we could all afford, to quote another famous multiple-personality movie character, “to go a little mad sometimes.”