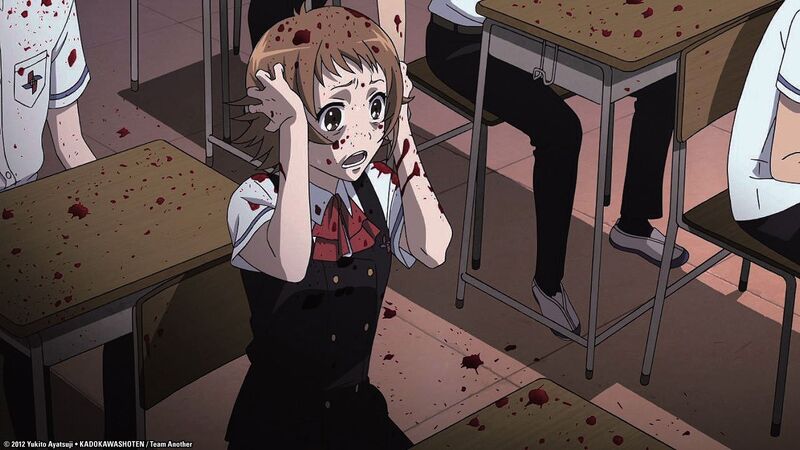 Imagine you’re sitting down watching anime, the plot is captivating, the animation is fantastic and the characters are fantastic. Everything comes together. But, it’s a horror anime and, as expected, a pool of blood and guts splashes across the screen in spectacular fashion. However, the way that these characters come to their untimely demise can be gruesome. From getting eye gouging to losing a head, here are 11 of the most gruesome anime deaths that will shock you.

Warning: this list contains spoilers and descriptions of gruesome deaths that may be inappropriate for some readers.

Considered as the Final Destination of anime, Another follows a group of students trying to survive a horrible curse that has been plaguing their classroom since the death of a student in 1972.

However, instead of some grade level bad luck, several students suffer gruesome deaths that might be seen as bizarre accidents, like falling down stairs and getting impaled by an umbrella or falling out a window neck-first. The truth is, however, that an unseen force is creating a complicated chain of violent events.

Although there are many grisly deaths in Attack on Titan, it’s Eren’s mom’s death that many consider one of the most shocking. Her death is gruesome — we’ll never forget how Carla was broken in two and eaten — but what we mostly take away from the scene was not the way she died, but how Eren was unable to help her.

Zombie hoards — Highschool of the Dead

We all know what zombies can do: they can run, bite, and turn you into the walking dead. And while some anime fans may be desensitized to such horrors, it’s still difficult to watch. Whether it’s a hoard of undead ripping into someone or the living fighting back with baseball bats, pipes, guns, or anything else they can get their hands on, Highschool of the Dead doesn’t hold back on the gory, violent kills.

Rika’s Suicide — Higurashi When They Cry

Suffering a horrific death at the hand of a criminal is already heinous. But when someone commits a rather horrifying and painful suicide, it takes the shock levels up a notch.

When a mad Shion threatens to torture the much smaller Rika to death, the young shrine maiden knows only one way to escape her would-be torturer. And that’s by picking up a large butcher’s knife and shoving it into a wall and repeatedly stabbing herself in the neck. What a horrible way to go!

Also featured on our Must-See Gore Anime list, Hellsing Ultimate is not for the faint of heart. Beside its deadly fight sequences, the series explores many R-rated themes that could make even the most avid horror fan squeamish.

However, one scene between Luke Valentine and the infamous nightcrawler particularly stands out. When Luke meets Alucard, our arrogant villain believes that he can destroy Alucard and prove that immortality is just a myth. But his ego quickly shrinks when the king of vampires shows his full power and leaves nothing but a pile of dog feces.

Don’t be fooled by the first episode, Blood-C has one of the most gruesome anime deaths that you wouldn’t even wish on your worst enemy. The series follows a young girl named Saya Kisaragi, who, at the beginning of the series is portrayed as a kind, inept, yet helpful person.

However, when night falls, Saya is a killing machine, destroying every monster that threatens her peaceful village. With a town full of demons, people meet some horrifying deaths, whether impaled, decapitated, eaten alive, or torn in two.

The magical girl genre changed when Madoka Magica premiered in 2011. No longer was the genre about cute little girls going on magical adventures, but its focus was all about the real sacrifices these girls make.

One such example is Mami Tomoe, who loses her head at the teeth of a witch. And although her death may not be as gruesome as some of the others on this list, it is, at the very least shocking to watch, especially for the genre.

School Days is a harem anime series that turns terribly wrong when the male main character, Makoto, gets his comeuppance. When Sekai discovers that her boyfriend is cheating on her, she devises a plan to get some payback. However, it isn’t a typical revenge plot. The cheating lover would pay the ultimate price for hurting Sekai’s feelings, at the hand of a kitchen knife.

If watching teenagers and a 100-year-old kid meeting the reaper’s scythe doesn’t shock you, then perhaps the gruesome deaths of Corpse Party will. When a group of kids innocently perform a ritual to stay friends forever, they are teleported to another dimension where a little girl is trying to kill them.

As if a dead girl and her minions killing your friends isn’t scary enough, but the way that they kill them is just plain sadistic. From getting poked in the eyes with scissors to tongues getting cut out, the screams of little kids will give you nightmares for days.

Kids Getting Gunned Down — Genocyber

While most of the list featured brutal deaths of children, the deaths in Genocyber are not only gruesome but extremely maddening as well. During the second episode’s intro, we see the main character, Elaine, and three kids running away from a military helicopter. And despite there being civilians, the pilot opens fire, instantly obliterating the kids, leaving their bodies scattered on the beach.

Elfen Lied is a tragically beautiful anime full of gore and violence. But its the death of a tiny puppy that proves the most gruesome of all. After finding a dog in the woods outside her orphanage, the abandoned and constantly bullied Lucy befriends the helpless creature.

Unfortunately, after her friend lets it slip to the bullies that Lucy has a dog, the leader Tomoo kicks and beats the dog to death while another bully holds her back. Watching such a horrible act carried out by children is disturbing. But seeing the pain on Lucy’s face after each blow is far worse, especially as she realizes the one thing she found comfort in is gone.

Sure, she ends up killing them all instantly afterward, but her reaction seems less gruesome by comparison.