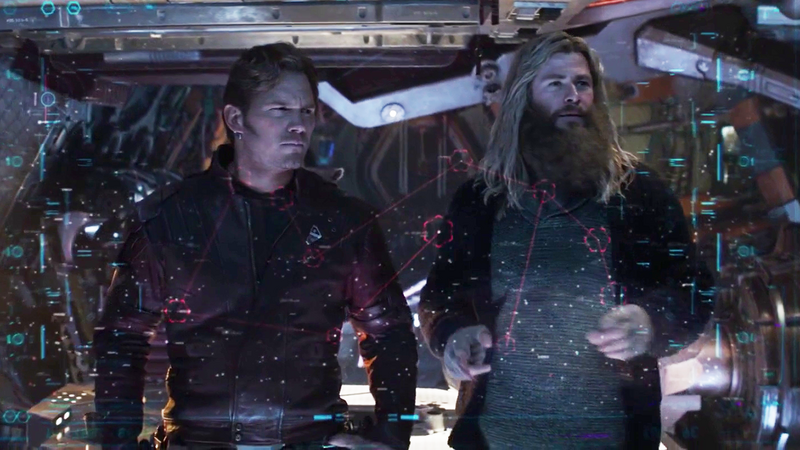 Who REALLY Leads the Guardians of the Galaxy?

Any good team needs a leader. Someone people look to not just for instructions, but also inspiration. Great leaders tend to be strong and bold, decisive and talented. They take a group of individuals with unique sets of skills and bring them together to create a unit that’s even greater than the sum of its parts.

Or something like that. Occasionally, you get a Guardians of the Galaxy situation, though, where a band of loners and rebels come together under the auspices of doing some good and making a lot of money!

So, who actually leads the MCU’s Guardians? After two solo films and major roles in Avengers: Infinity War and Avengers: Endgame (Watch Now on Disney+), and an upcoming third feature, the group has gone through its share of battles together, but figuring out who’s in charge can be confusing at times, especially with the potential addition of Thor at the end of Endgame and a possible power struggle between him and Star-Lord.

As anyone who watched the first Guardians of the Galaxy film remembers, the team came together through sheer coincidence when they all got locked up in the same space prison. Peter Quill, aka Star-Lord, considered himself the leader because he came up with a plan and also happened to own a space ship.

Since then, it’s a toss-up as to whether the other Guardians actually consider Quill as the leader or if they just let him think he is. His teammates do seem to respect the bravery he exhibited going up against the likes of Ronan, Ego and Thanos, but they don’t always follow his plans. And, it certainly didn’t help when he lost his cool during the fight with Thanos on Titan that could have stopped him from gaining all of the Infinity Stones. Still, for now, he seems to be in charge. …That is unless Thor has something to say about it!

The Odinson may have just started adventuring with the Guardians of the Galaxy in Infinity War and Endgame, but he’s already made quite an impression. Everyone but Quill instantly recognized his power and gravitas. Rocket and Groot even followed him to Nidavellir to build Stormbreaker in an attempt to stop Thanos’ campaign for the Stones.

Though he had trouble dealing with his failure to save everyone from Thanos’ snap, Thor did jump into the fray for the battle with the time-traveling Thanos. Eventually, the good guys won and Thor handed leadership of the Earthbound Asgardians over to Valkyrie and flew off with the Guardians for some space adventures. As a battle-tested god and hero of many realms, Thor would make for an excellent leader, but for now, he’s content to let Quill be seen as the leader… we think.

Honed by Thanos into a weapon, Gamora became the most dangerous woman in the galaxy. However, even his soul-crushing methods could not completely quench the fire in her heart. Her innate capacity for good, has grown ever since, making her a prime candidate.

Gamora’s exact status in the MCU remains a mystery at the moment though. Viewers know that Thanos took her to Vormir and sacrificed her to get the Soul Stone. We’re also not sure what happened to the Gamora from 2014 when Iron Man snapped Thanos and his forces away, though Star-Lord certainly is hoping to find her. If she’s out there to be found, the Guardians will be able to do it.

When it comes to scientific know-how, strategic planning and warfare, you can’t do much better than Rocket. Over the years, we’ve seen him orchestrate a prison break, lead a platoon of ships, and stand up to Ronan and Thanos among others.

On the other hand, Rocket’s penchant for thievery often gets him and his teammates in trouble. He’s been known to steal body parts just for laughs, but also got the Guardians into all sorts of trouble with the Sovereign when he couldn’t help but swipe their batteries. Between his time with the Guardians and surviving Thanos’ snap, it seems highly likely that he’s matured into just the right person (or trash panda?) for the job of leading these band of misfits.

While we’ve seen Rocket grow and mature over the course of the films, Groot’s had a more complicated journey thanks to his unique physiology. In Guardians of the Galaxy, the seasoned warrior not only bravely took on all enemies, but also displayed the kind of heart and courage you want to see in a leader, especially when he appeared to sacrifice himself to save his teammates.

Though, the Groot we first knew died during that climactic battle, he actually restarted his life cycle (or, arguably, created his own spawn), who we’ve seen growing up over the course of the following films. Baby Groot was admittedly adorable, but struggled to follow directions. Teen Groot was super moody, but also sacrificed a part of himself to build Stormbreaker and fight against Thanos. We’re not sure what stage of development Groot will be next time he shows up on screen, but it would likely still be quite awhile before he is ready to lead this group.

Few characters in the MCU have evolved quite as much as Nebula. She began as an absolute devotee of her adoptive father Thanos and also wanted nothing more than to see Gamora destroyed by her own hand. By the second film though, she wound up working with the Guardians to fight against Ego.

In Endgame, Nebula not only turned on Thanos, but kept Tony Stark alive in space until Captain Marvel found them. She and Rocket then spent five years keeping the galaxy safe. We were reminded of how much she changed by witnessing the Nebula from the past causing trouble for the present in hopes of pleasing Thanos. The present version showed how much she changed by actually killing her past self. At this point, she’s solidified her place with the Guardians, but it will probably take quite a bit more time before they would take orders from her.

The Guardians first met up with the empathic Mantis on Ego’s planet. She worked with Peter Quill’s father to calm him down. Eventually, she told the team what they needed to know to defeat the Celestial in the shape of a man, which resulted in her joining the gang.

Even as the newest member of the team, she held her own against Thanos, using her powers to put him in a trance while the others attempted to remove the Infinity Gauntlet from him. She was snapped out of existence by Thanos, but returned five years later to help everyone stop the time-traveling Thanos. From there, she flew off with Thor and the other Guardians and seemed perfectly content — and indeed entertained — to watch Thor and Quill fight for leadership.

Let’s be honest, Drax might be the first person you’d call for a fight, but you’d be a maniac to follow him into battle. The incredibly literal-minded warrior can stand up to just about any threat shy of an Infinity Stone, but the closest thing he’s ever had to a plan involved contacting Ronan and giving the Guardians’ location to their enemy. Even so, Drax has proven himself an absolutely indispensable member of the Guardians, just not the kind of person you would want running the show.

And The Leader Is…

We’re going with Star-Lord for the time being. He’s still the guy with the ship and has shown great interest in all the leadership responsibilities, at least more than the others. However, if push really came to shove and Thor asserted his dominance, the team just might change their name to the Asgardians of the Galaxy.