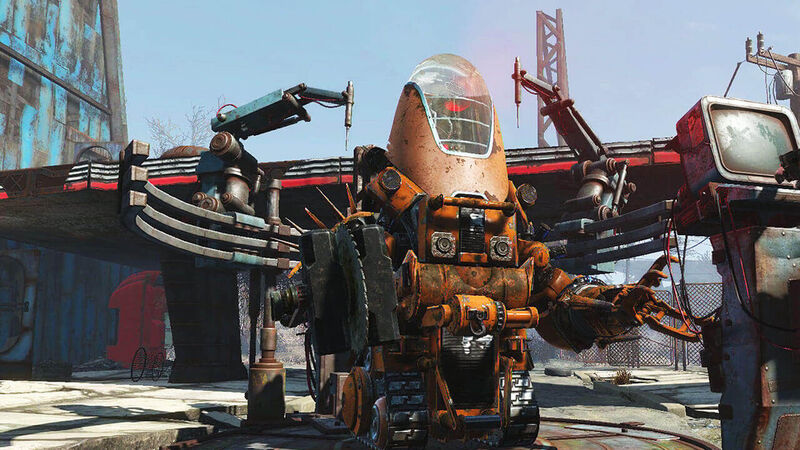 The first DLC pack of Fallout 4, Automatron, released last week and brought some new customization and crafting options to the survivors in the Commonwealth. A new villain has emerged as well – The Mechanist. This tech tyrant has created an army of deadly Robobrains to terrorize the Commonwealth. The best way to defeat him? Even the odds!

Automatron introduces a complex robot crafting system into Fallout 4. Players can piece together their own unique robot companions with different body parts, weapons, armor, and mods to produce deadly results. There are a wide variety of customization options.

Our Fallout 4: Automatron Robot Crafting Guide will help you build an unstoppable machine. The Mechanist won’t stand a chance!

Before crafting robots of your own, players must complete the introductory quest Mechanical Menace. Afterwards, players will receive the Robot workbench schematics from Ada. Ada will be your primary companion throughout Automatron, so modifying her parts will be the most handy.

The are two primary ways of outfitting the robots you crate. The first is to scavenge parts and mods from enemy robots you defeat. The second is to craft the parts yourself using materials. Crafting should be your primary method of building robots, as random chance plays too big a factor in the parts you find from enemies.

For the most crafting options, invest in the following perks: Science!, Robotics Expert, Blacksmith, Gun Nut, and Armorer. The more advanced (and best) parts require them.

What Type of Robot Should I Build?

The parts you choose can also lead to bonuses in particular weapon types, so feel free to experiment with what parts pair best with your weapons.

Let’s break down a list of each robot part to see which options are the most effective in the Commonwealth.

Assaultron Head
Perks: Science! Rank 2, Robotics Expert Rank 1
The powerful burst of the Assaultron Head Laser can provide some great damage to robots. It should be used on melee-focused robots due to its low accuracy.

Robobrain Head
Perks: Science! Rank 2, Robotics Expert Rank 1
The Robobrain Head is clearly the best head for robots. It allows your robot to perform the Mesmetron Pulse attack and also increases the accuracy of your weapons.

Mr. Handy Torso
Perks: Science! Rank 1
The Mr. Handy Torso is a great choice for melee-focused robots, as the torso gives a boost to movement speed.

Sentry Torso
Perks: Science! Rank 3, Robotics Expert Rank 1
The Sentry torso provides the most health of all torso types, allowing your robot to endure long battles. However, the torso is prone to overheating.

Mr Handy Thruster
Perks: None
The most mobile of all leg types, the Mr. Handy Thruster is perfect for melee robots to close the distance between enemies quickly.

Warmonger Serrated Storage Plate
Perks: Armorer Rank 4
The Hydraulic Frame Armor requires some steep requirements to craft. For melee robots though, it’s worth it. The set causes enemies to bleed.

Recon Sensors
Perks: Robotics Expert Rank 1
Recon Sensors are a mod that tracks enemy targets for players. Perfect for players who prefer to follow their targets from range.

Regeneration Field
Perks: Robotics Expert Rank 2, Science! Rank 2
The Regeneration Field heals nearby human allies outside of combat. For those who like to save their stimpacks, it’s a great alternative.

Tesla Coils
Perks: Robotics Expert Rank 2, Science! Rank 1
On the offensive end, the Telsa Coils mod deals energy damage to nearby enemies. Some missions throw an insane amount of robots your way and equipping this will help even the odds.

May your robot creations bring peace to the Commonwealth! For more Fallout 4: Automatron information, visit Nukapedia. There you can find a comprehensive list of robot parts and mods.