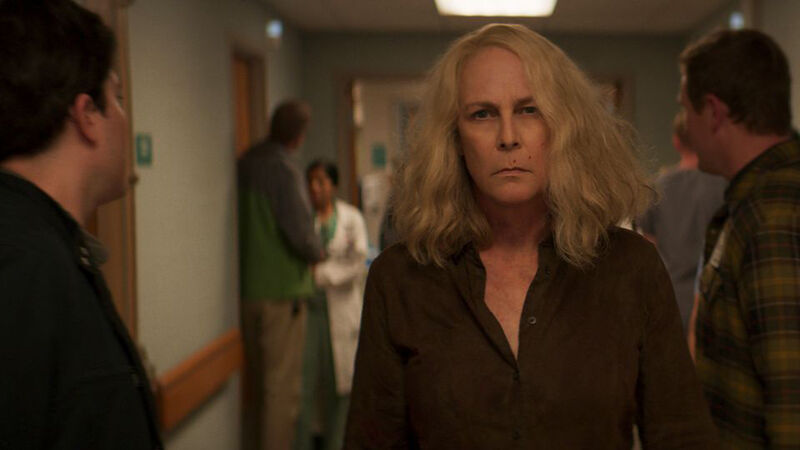 The following article contains MAJOR SPOILERS for the ending of Halloween Kills. Proceed at your own risk.

Laurie Strode is a woman whose entire life since she was a teenager has been coloured by one fateful night in 1978. Forced to come of age in the worst way possible – by acknowledging, witnessing, and surviving the worst the world could throw at her – the tail end of Laurie’s formative years was shaped by horror. Indeed, to quote Dr Loomis, by evil, purely and simply.

David Gordon Green’s Halloween – a direct follow-up exploring the fallout of those events 40 years later – dealt with the effects of what happened that night on one woman’s psychological wellbeing. In the intervening decades, not only has Laurie Strode been unable to escape the emotional trauma of becoming personally caught up in and surviving one man’s killing spree, but she has also, it turns out, been unable to escape the man himself. Just as the after-effects haunt her, so does the Boogeyman as he returns to continue what he started.

Instead of providing closure to the unending cycle for Laurie, Halloween Kills keeps the wheel turning, heaping additional terror on Laurie Strode. First, in the discovery that she failed to extinguish Michael Myers after trapping him in the basement and setting fire to her house; second, in the mayhem that ensues; and third, in the damage her inability to move on and the Shape’s subsequent return has wreaked on two successive female generations of her descendants.

Not only has Laurie as a woman, suffered, but also that suffering has been visited upon both her daughter, Karen, and granddaughter, Allyson. Both have been forced to bear witness to Laurie’s mental fragility over the years and the impact of her brush with horror, and each has subsequently become drawn into the horror itself on Michael’s return to Haddonfield.

We’re yet to discover how Laurie will react to the news that her daughter Karen has been slain by Myers, which we see at the close of Halloween Kills — we’ll learn more about this in the next film, Halloween Ends. So, to help us unpack Laurie’s psychological state ahead of Green’s closing part of the new trilogy, we asked Jamie Lee Curtis herself how she feels Laurie would react to the discovery.

A Pinball in a Pinball Machine

“You know what,” begins Curtis, “I’m not going to suppose or ascribe to the third movie anything. You’ve seen this movie. It ends in a really shocking way. That’s all you need to know. You, as an audience goer, as a film lover, as a Halloween fan, get to ruminate and perseverate about what the future is for these people. And then we’re gonna show you.”

If we’re going to ruminate, we’d guess that Laurie would be pretty aggravated to discover that not only has Michael now murdered her only daughter, and that she would also feel complicit in visiting that horror on her. Just how much trauma can one person take?

“Well, I only have lived the trauma that has been written for me up till now,” says Curtis. “What I loved about the 2018 movie was that it explored the idea that this brilliant high school valedictorian who would have gone to medical school, had her life shattered by a maniac, and that she didn’t get any mental help. She bounced around life like a pinball in a pinball machine, she banged into things and people.”

What happened made Laurie single-minded and caused problems in her personal life. She brought a daughter into the world who she wasn’t fit to raise and who, while Karen loved her mother, felt an enormous amount of resentment towards her.

“One of those bangings, excuse the pun, resulted in the birth of a child,” continues Curtis. “That child was taken from her. She made no real contact with anybody and she ended up kind of in the gutter, and then she got catapulted back up into the game and banged around again. When we finally meet her 40 years later, she has protected herself. She has lived a life of total isolation with one purpose and one purpose only: ‘He will come back. I will be ready. I will avenge my friends’ deaths. And I will. That is my entire goal.’ And that was what the movie explored. So I was very happy that that movie… I wouldn’t have done it if that hadn’t been the story. That was the story to tell.”

Back in Warrior Mode?

That Halloween coincided with #MeToo and Time’s Up made the ground covered all the more resonant and powerful.

“It collided with the women’s movement,” recalls Curtis. “It literally collided with it. The women’s movement started in October, or September, of 2018. And our movie came out October 21. Boom! And off and running we were. So I was very happy that that was how the movie portrayed psychologically Laurie Strode — defensive, protective, locked away. Warrior mode.”

Curtis says to have halted the return of Michael Myers at the close of Green’s first film would have satisfied her and brought a peaceful closure to the Strodes’ story. But of course, Michael’s not dead and the story doesn’t end. In continuing this way, Laurie’s narrative just got a whole lot more complicated again. In Halloween Kills, there’s a slight glimmer of hope for Laurie as she begins to start piecing her life together while lying in her hospital bed.

Says Curtis, “I actually believe that if they had ended [the previous] movie with Laurie dying in the back of that truck, that would have been a great ending, because Laurie would have died with her daughter and granddaughter reunited, and Michael was dead. If that was one movie, and that was the way we’re gonna end it — boom, wonderful movie.

“The fact that she survives, and she now is in a movie, again, for the first chunk of the movie, she’s actually almost flirting with Frank, trying to put some pieces back together – ‘Is Frank Karen’s father? Did we do it in the bathroom? I don’t remember; I kind of feel like you were there. And did we?’ You know what I mean? Until she finds out that Michael’s alive, and then she wants to be in warrior mode, but she can’t — she has to pass it on to her daughter and granddaughter. And that’s all she knows. At the end of the movie, she has caused this terrible cyclone because of this relationship. And that’s how the movie ends, her looking out of that window.”

Putting the Survivor to the Test

Is it safe to assume that if she’s fit enough for the final film – which David Gordon Green says will begin with a time jump – Laurie will once again be intent on vengeance? The director teases that there’s more to it than that.

“We’re jumping time a little bit in [Halloween Ends] but part of what we’re exploring is how Laurie and a few of our characters have processed those years between Halloween 2018 and that night’s events and tragedies to Halloween 2022 [tracing the journey] to where they will come to fruition in their psychological aftermath.”

He adds, “Laurie is inspiring and definitely a survivor so that’s one of the things that I find so fascinating about her character — it’s not just good versus evil, but it’s taking a beautiful and intelligent and resilient heroine and putting her up against as many obstacles as possible, watching that adventure. Watching that journey is part of the mythology that really, really inspires me.”

One of the characters that Halloween Ends will also be exploring is Allyson – who arguably has an even bigger grudge to square against Myers since he has killed her father, her boyfriend, and now her mother.

“That’s exactly what Halloween Ends [explores] — the core of that story is [Allyson’s] considerations and psychology,” says Green.

The Significance of Lindsey Wallace

While Laurie may have caused untold damage to the women of her own family – and we’ve yet to see how Allyson will come out of the third movie – there’s one woman who she has undeniably helped. And that woman is Lindsey Wallace. The little girl Laurie was minding — and protecting — in John Carpenter’s original movie, Lindsey is reintroduced to us in Halloween Kills alongside fellow ward, Tommy Doyle, as grown-ups. Both are still living in Haddonfield, united by their shared experience. Tommy becomes consumed by revenge and winds up leading a mob hellbent on ‘justice’ at whatever cost, ultimately losing his life. But Lindsey survives. How did Green decide that she would be the one returning character from the original movie to make it through to the end?

“She was part of the core concept of this movie, thinking about that moment and the ending of John Carpenter’s Halloween in 1978 where Lindsey is a little girl and she’s with Tommy,” says Green. “They’re kind of cowering in the hallway and Laurie says, ‘Do as I say, get your asses out of here,’ basically. Seeing her progress and evolution as a character to 40 years later, [there’s] a real role reversal where she’s been inspired by Laurie in that moment. There’s a sequence of her at this playground [in Halloween Kills] where she’s protecting children in that same way; she’s taken that survivor mentality and become a protector. That was a fun thing to explore.”

Can we assume there’s more of that story to come in the next movie?

“There is more of that story to come, yes,” reveals Green, enigmatically. Well, Happy Halloween Ends, everybody.

Halloween Kills is out now. Halloween Ends is set to release on October 14, 2022.

Click below for more from our interviews with Jamie Lee Curtis, David Gordon Green, and the cast of Halloween Kills.