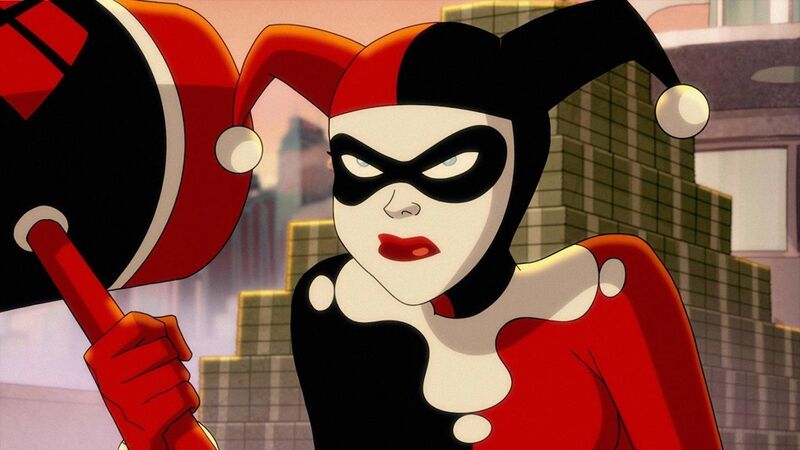 This November, DC Universe launches its newest series, and boy is it a doozy, as the animated Harley Quinn premieres. The 26-episode season broken up into two distinct 13-episode arcs, and if the first episode, which was screened for fans at New York Comic-Con this past weekend, is any indication, the theme of the series is “irreverence for days.”

The premiere provides the how and why Harley decides she is done with the Joker, as we also meet her BFF Poison Ivy and her pet plant, Frank. Batman and Commissioner Gordon are also introduced, in ways you may not expect, and there are appearances by the likes of Calendar Man and the Riddler.

For those wondering if this show was something the whole family can enjoy together, the answer is yes… If your family is all 18 and over. While this is an animated program, it’s for mature audiences, and DC makes sure viewers know it from the start.

In the series, Harley (voiced by Kaley Cuoco) is trying to make her way on her own. The question is, which way is that? Where is Harley going? We were able to get some answers at NYCC when we sat down with producers Justin Halpern and Patrick Schumacker to talk all things Harley.

Where is Harley headed? After years of being the right hand of the Clown Prince of Crime, Harley is finally making her way on her own (with some help from her BFF Poison Ivy, voiced by Lake Bell). At first, she has some lofty goals. “There are a couple of threads running through the first season,” said Schumacker. After seeing Joker in the spotlight for so long, “Getting a chair in the Legion of Doom is a tangible goal for her. We play a lot with the ‘glass ceiling’ and how it’s not just a thing in corporate America but super-villainy as well.”

Halpern added, “[Her journey] is an important theme of the show. You break up with someone, and you think you are out there discovering your path but are you just doing something to show everyone else how great you’re doing, and is that exactly what you want? Towards the end of the season, it’s a big question.”

Who else will we see?

Besides our titular character and the aforementioned Poison Ivy, expect more Rogues and less Bat-Family as the season progresses. “We’re focusing on the villains,” said Schumacker. “Batman (Diedrich Bader, once more voicing the Caped Crusader after Batman: Brave and the Bold) comes back sporadically throughout the season.”

Poison Ivy won’t be the only member of Harley’s crew in her quest to be taken seriously. Clayface (Alan Tudyk, pulling double duty, as he also voices the Joker), Bane (James Adomian), and Kite Man will have integral parts on the show – the latter two growing on the producers as the writing on the series progressed.

“[Kite Man and Bane] have bigger roles than originally intended,” said Schumaker. “The ridiculousness of Bane going from destroying Gotham Stadium to fighting Todd at Jamba Juice was hilarious to us,” added Halpern.

If Harley Quinn were a movie, it would be rated R. There’s profanity, there’s violence… and there’s profane violence. And it works.

“Make the show you want to make. It’s easier for them to pull us back then it is to put restraints on from the beginning,” said Halpern, regarding how easy it was to work with DC on this project. “The one thing [DC] said was to ‘not soil the good name of our heroes.’ There’s a difference between self-parody and ruining the reputation of characters you care about deeply.”

One thing fans will notice is that Kaley Cuoco’s voice work on the show as Harley is different from previous iterations of the character. For one, she no longer has a thick New York accent. “Kaley was familiar with the Harleys of the past,” said Schumacker, “She wanted to do something different while still maintaining the manic personality of Harley.”

Fan needn’t worry, though. She still calls Joker “puddin'” and “Mista J.” Some things you need to leave untouched.