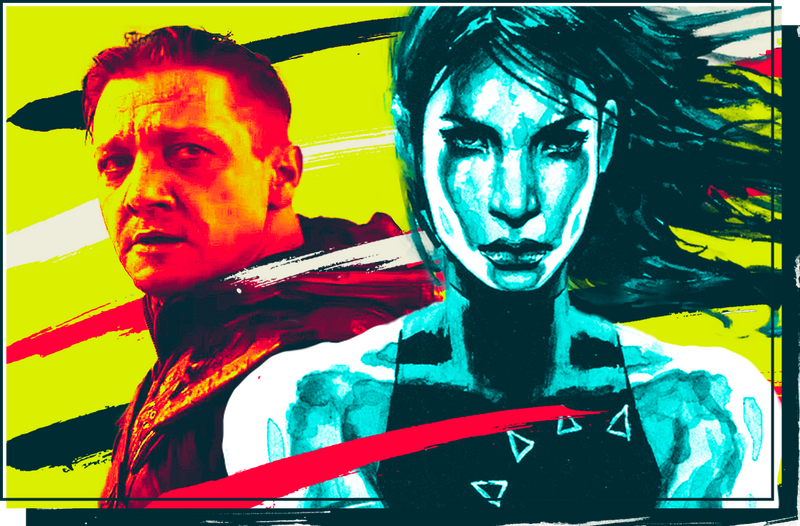 ‘Hawkeye’: How Bringing Echo into the MCU Can Tie to Daredevil and Much More

The upcoming Disney+ original series, Hawkeye, will mark the debut of Hailee Steinfeld as Kate Bishop, the second Hawkeye. However, Kate isn’t the only heroine making her first Marvel Cinematic Universe appearance on the show. According to Variety , newcomer Alaqua Cox has been cast as Maya Lopez, a.k.a. Echo.

Why is this significant? Well first off, Echo is notable as one of the few Native American heroines in the Marvel Universe, and also one of the only deaf heroes as well. But on top of that, Echo’s backstory in the comics features strong links to not only the original Hawkeye, Clint Barton, but also Daredevil, Kingpin , and even Wolverine . This gives Echo the unique opportunity to tie together several different aspects of the Marvel Universe on screen.

But first, let’s talk about her skillset and the suspicious timing of her debut…

Maya is not a mutant in the comics, nor is she superhumanly enhanced. Regardless, she does have the gift of photographic reflexes. Echo earned her codename because of her uncanny ability to duplicate any physical action she sees… and she only needs to see it once. The Marvel villain Taskmaster essentially has the same ability, but his powers were artificially augmented at the cost of his long term memories. Maya doesn’t seem to have the same weakness in her ability.

Within the comic book realm, there is no direct link between Maya and Taskmaster, despite their matching skills. Maya’s father was Willie “Crazy Horse” Lincoln, a mob enforcer. Zahn McClarnon is playing Maya’s father on Hawkeye, but his name has been changed to William Lopez. Because Black Widow hasn’t been released, we don’t know for sure who is under Taskmaster’s mask in the MCU, but given the size and body shape of Taskmaster in the trailers, it may be a woman in this incarnation.

The recent Hawkeye casting news, which included several actors reported to be a part of the series, may have already given us a link between Echo and the MCU Taskmaster: Florence Pugh, reprising her role as Yelena Belova from Black Widow. We don’t know for certain that Pugh will appear in the same episode or episodes of Hawkeye as Cox. But given that Hawkeye seems to take place after Endgame — and thus also Black Widow — it stands to reason that Yelena would notice that Echo has the same powers as Taskmaster. It’s not even out of the question to suggest that Maya could have a direct familial link to Taskmaster in the MCU. After all, we know next to nothing about Maya’s mother in the comics.

Although Maya was born deaf, her abilities didn’t manifest themselves until she went to school. It was initially assumed that Maya had a learning disability until she perfectly replicated a song on the piano. From that point on, Maya was placed in schools for the gifted and she proved to be a prodigy in several fields.

Wilson Fisk, aka the Kingpin, murdered Maya’s father when she was still a young girl. Yet Fisk had enough respect for “Crazy Horse” to honor his request to raise Maya as his own daughter. This would be a large retcon for Vincent D’Onofrio’s Wilson Fisk, as seen in Netflix’s Daredevil. That said, it was a retcon in the comics as well.

The MCU has an additional advantage that could make this work if D’Onofrio’s Kingpin is still in continuity or could be rejiggered to fit into the core MCU. The five-year gap between Thanos’ snap and the heroes’ return in Avengers: Endgame could be the perfect time for Fisk to take Maya in with an eye towards exploiting her abilities in the future.

The only thing working against that theory is that McClarnon’s William Lopez is already lined up to appear in Hawkeye. Unless McClarnon is only appearing in flashback, he’ll be a part of Maya’s story in the present. Yet even that doesn’t rule out William’s demise, and potentially setting Maya up for a new life with Fisk.

During the classic Marvel Knights: Daredevil comic, Fisk used Maya as a weapon against Matt Murdock and his costumed alter ego. First, Fisk arranged for Maya to meet Matt without either one knowing about their special abilities. Fisk correctly predicted that they would fall for each other, and they did. Concurrently, Fisk tried to frame Daredevil for the death of Maya’s father so that she would murder his archnemesis.

In his zeal, Fisk overlooked the one key detail that could derail his plan: Matt was too young to have murdered Maya’s father. Once Matt was able to convey that, Echo struck back at the Kingpin and temporarily blinded him. That was also thedeath knell for Matt and Maya’s burgeoning romance.

We suspect that the age difference between Alaqua Cox and Charlie Cox (no relation) would rule out a romantic relationship between Maya and Matt in the MCU. On the other hand, you could still establish them as allies, and the Charlie Cox version of the character might be old enough to have in fact killed her father if they wanted to use him for the storyline where Kingpin frames him for that crime. Of course, Marvel hasn’t tipped its hand yet about any plans for Daredevil and his related characters. The full Daredevil screen rights only reverted to Marvel (and thus Marvel Studios, who now control all the TV projects as well) at the end of November, on the second anniversary of the show’s cancellation.

Daredevil and the other Marvel TV shows were previously kinda-sorta in the MCU, as they sometimes gave nods to events that took place in films like The Avengers and Captain America: Civil War without directly participating in them – and things got murkier as the shows went on and less of the big events were referenced or seemed to impact the TV heroes or their lives. However, fan sentiment is clearly behind Cox, D’Onofrio, and the rest of the cast to reprise their roles and now rumors are flying that Cox will in fact be back as Matt Murdock/Daredevil in the next Spider-Man film.

If somehow those Charlie Cox rumors don’t pan out and Marvel Studios wants to instead introduce a younger Matt Murdock to the MCU, who would be more age appropriate for Alaqua Cox’s Maya, they could. Any incongruous details between the Netflix series and the films can simply be waved away. Perhaps the TV shows took place in another similar timeline, but not truly the same reality as the MCU.

When Maya went to find herself and resolve her feelings for both Matt and Fisk, she ran into Wolverine on one of his own sabbaticals. This is a rite of passage for any hero in the Marvel Universe, as Wolverine is bound to cross their path at one time or another.

Wolverine didn’t play a pivotal role in Maya’s story, but learning about his experiences allowed Echo to put her own life in order. It seems highly unlikely that Marvel Studios would introduce the new Wolverine in service of Echo’s story. Yet the fact remains that he did play a part in shaping the next stage of her evolution.

The Ronin of it All

Of course, there’s also the main connection between Echo and Hawkeye in the comics, and the reason we suspect she wound up in the Disney+ series in the first place. In the New Avengers series, Echo resurfaced in Japan as a new hero called Ronin. To protect her identity, Maya’s body armor made her appear to be a man. If the name Ronin sounds familiar, it’s because that was the unofficial name of Clint Barton’s vengeful, post-Hawkeye identity at the start of Avengers: Endgame. In the comics, Clint Barton became the second Ronin after Maya went missing. This was also shortly after Clint’s own return from the dead. In the movies, it was instead the loss of his entire family, thanks to Thanos, that led Clint to become the murderous Ronin.

Kevin Feige has said that the Hawkeye series, while telling a story set in the MCU’s present, will also explore more of Clint’s time as Ronin. It’s entirely possible that MCU could reverse the order from the comics, and make Maya the second Ronin instead of the other way around. It’s worth noting that Clint and Maya also become romantically involved in the comics, but that definitely seems unlikely to repeat itself in live-action. The MCU’s Clint is much older, and happily married with children, who are all thankfully returned to him after Endgame.

The very fact that Echo is being introduced in Hawkeye essentially promises that she will encounter both Clint and his protégé, Kate Bishop, at some point in the series. She may even be aligned against them, initially. But Maya’s destiny is to be a heroine, and she was an Avenger in the comics. She has the potential to reach that status in live-action as well. Her future in the MCU has yet to be written, but we’re excited to see Echo leave her mark.