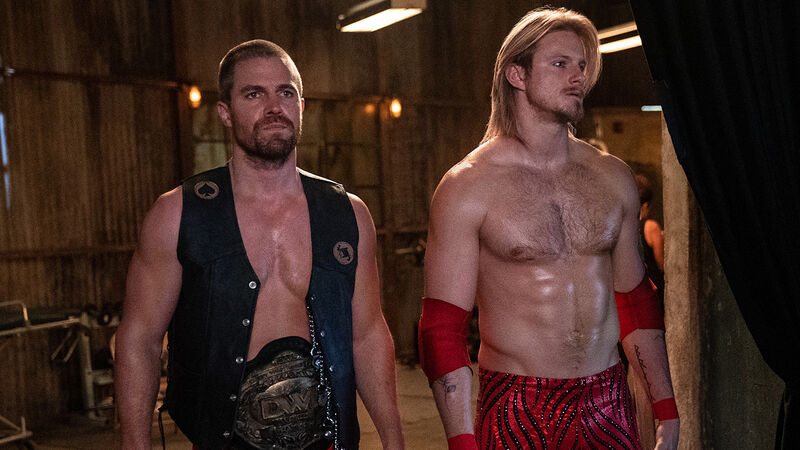 ‘Heels’ Reflects How Wrestling Brings Superheroes and Supervillains into Reality

Having spent eight years defending Star City on Arrow, Stephen Amell is turning heel. The actor, who proved his superhero prowess as Oliver Queen, now returns to TV in Heels, a new Starz series set in the world of independent professional wrestling.

Amell and Alexander Ludwig (Vikings) star as Jack Spade and Ace Spade, who have followed in their late father‘s footsteps as pro wrestlers in the small town Duffy Wrestling League, or DWL, where Jack is the main heel (AKA bad guy) and Ace the main face (AKA good guy). But behind the scenes, Ace is being scouted to potentially move on to far greater success, while Jack bears the weight of keeping the DWL afloat, even as their real life familial bond — and familial tension — is used to fuel their in-ring storyline as hated enemies.

Heels was created by Michael Waldron, who is very busy with the MCU these days as the Head Writer on Loki and writer on Doctor Strange in the Multiverse of Madness, while actor/writer Mike O’Malley (Shameless / Survivor’s Remorse) serves as showrunner.

Amell, Ludwig, Waldron, and O’Malley spoke to fandom about wrestling’s depiction of larger than life heroes and villains, Jack and Ace’s real and fictional rivalry, and working with CM Punk on Heels.

While he’s now immersed in the world of Marvel, Waldron noted that growing up, “Wrestling was kind of my comic books, in a way. I think I was just drawn to the big mythic poppiness of it. It’s such a blockbuster form of entertainment. Every match is good versus evil; there’s somebody to cheer for and somebody to boo and they’re going to duke it out and I love that. It felt like playing with my action figures as a little kid and I think that that’s why it’s such an enduring pastime, and why people love it so much.”

While O’Malley didn’t grow up a wrestling fan, he saw the appeal for families, remarking, “I think that when you’re raising kids, you’re trying to show rewards for good behavior and consequences for bad behavior. And bad behavior is self-interest and selfishness and doing things for purposes of expediency and anything that helps lift up the individual. Whereas hopefully, if you’re trying to raise a good son or a good daughter, it’s how can you think about others? How can this community be knit together? How can you overcome your worst instincts and be a good person? That’s why I think heroes and villains resonate so much in storytelling and in wrestling, because people relate to it.”

In wrestling, kayfabe is the term used for selling your role and your gimmick to the fans as though it were genuine and Amell said, “That’s certainly important to Jack. If you’re worth your salt in wrestling, you don’t f**k around with kayfabe. It’s a no-no, it really is.”

A lifelong wrestling fan, like Waldron, Amell has wrestled a couple of big wrestling matches himself, and recalled, “Before my match against Christopher Daniels at ALL IN, we’re standing outside with Kenny Omega down by the ring apron and he wanted to give me a couple of pointers but they were shooting some behind the scenes stuff so we couldn’t.”

When it came to maintaining kayfabe, Amell noted, “Jack Spade loves that s**t, he really, really does. And we’ve got that nice shot of him in the first episode where he stares down some little kids and scares them and it just makes him happy.”

Wrestling is often fueled by real life, with actual family members and friends using those genuine bonds as storyline fodder. This goes for Jack and Ace being brothers and the son of a local wrestling hero in Heels, all of which is brought up for their DWL  storyline rivalry, even as they have a very complicated and often very difficult relationship out of the ring as well.

Said Amell, “That’s the bedrock of any real good wrestling story, frankly, is, anyone’s gimmick tends to be their personality turned up to 11; I know that that’s what Stone Cold Steve Austin has always said. And just getting to know Phil Brooks, CM Punk, a little bit or Cody [Rhodes] as well, they’re going out in the ring and they’re giving you the superhero version of themselves, even if that is a super bad guy. The line and getting real close to the fans going ‘Oh, that looks kind of real… What’s going on here??’ – that’s cool. That’s the fun part.”

“It’s fascinating,” said Ludwig, of wrestling combining fact and fiction. “Just from an acting standpoint, you couldn’t ask for a greater gift. Because the world is limitless. There’s no limit to how wild and rambunctious your character can be inside and outside of the ring. These guys are performers but they’re also human beings just trying to put food on the table. They want more out of life. Why I’m so proud of this show is I believe we made the show we set out to and it’s something that you don’t have to be a wrestling fan to connect with.”

Ludwig added, “I do feel like we did right by the wrestling community and getting to bridge that gap and explore what it would be like if a character followed you home was really, really fascinating because there’s really no other other sport like that. Even in a play, your character just stays on the stage. But when you’re trying to keep up kayfabe… The only other thing I can compare it to would be like being a magician back in the 1900s when he had to act like some mystic when you were done with your show.”

O’Malley said it made sense why people connect to those wrestling storylines, equating it to, “Why family dramas, if done right, are popular and are successful. It’s because those ties that bind you are blood ties. Everyone has a family member that they’ve gotten into an argument with, but you can’t just write them off. If Jack Spade does any one of the things he does to Ace Space to just a friend, they don’t have all this history, they don’t share parents, they don’t share a whole history that they have to throw away.”

Waldron reflected that, “When I was a kid, it was all heroes and villains. That’s how I thought of things. It was ‘We’re the good guys, and we’re gonna beat the bad guns.'” He added, with a laugh, “Obviously, that just serves to distract you from the reality of adult life, which is that we’re all sort of the bad guys and there are no heroes.”

Waldron said he felt with Heels, “What’s interesting to explore in this show is the complexities of real life, where things aren’t so binary, and how they bleed into the ring and into these matches and into the shows. That was a cool jumping off point for a series about pro wrestling.”

Former WWE wrestler Phil Brooks, AKA CM Punk, appears in the third episode of Heels as Ricky Rabies, a longtime indie wrestling star Jack hires for a show to bring some attention to DWL.

Said Amell, of working with Brooks, “Obviously he wasn’t gonna have any trouble with the wrestling aspect of the character, but he knew who Ricky Rabies was. There’s no character actually called Ricky Rabies, but that guy, who’s like a lifetime star on the indie circuit, Phil knows that guy. And what he brought to this role from an acting perspective is what really blew me away.”

Jack and Ricky square off on Heels and Amell noted, of Brooks, “He basically booked the match and figured it all out and the fun things that we could do during the match, which was incredible. We actually bring him back later in the season. It’s just such a blessing for us in terms of legitimising this show and this experience with the wrestling fandom. We want to branch it out and we want to bring other people in and you don’t have to be a fan of pro wrestling to enjoy the show, but we want the wrestling fans on our side and I can’t think of anything better than having CM Punk give us the nod or the rub.”

Ludwig noted that working on Heels gave him a new perspective on pro wrestlers, stating, “The respect I have for just how much abuse these people’s bodies take on a regular basis has just grown tenfold if not more. It’s no joke what men and women do.”

Recalling Brooks watching him do some of his own wrestling scenes, Luwdig remarked, “Never have I felt cooler than when Phil gives you a pat on the back and goes ‘Yeah, man!’ Man, that was badass.”