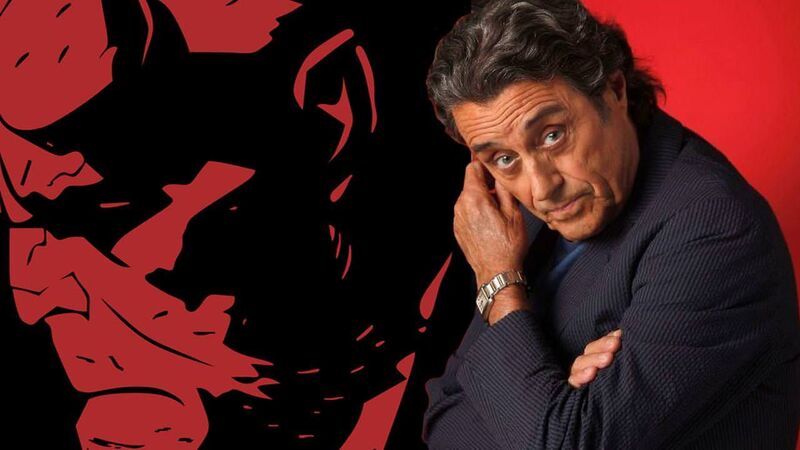 Hellboy is currently getting the reboot treatment courtesy of Game of Thrones director Neil Marshall, and fans are excited to see the big red hero back on the big screen. Even more exciting is American Gods star Ian McShane being cast in the role of Professor Broom, Hellboy’s adoptive father.

FANDOM chatted with McShane about the indie drama Jawbone — which you should see, it’s good — and the conversation eventually turned to Hellboy. And there was an intriguing tidbit to McShane’s version of the demon’s dad.

According to McShane, the relationship between Hellboy and Broom will have a very different foundation than what fans saw in the first two films. The actor explained:

“You don’t start with the birth of Hellboy… but the relationship between [Hellboy and Broom] is quite crusty. Does he trust his father? [Hellboy asks], ‘Why didn’t you kill me? I’m a monster.’ It’s a little bit of a psychological battle against Hellboy.”

There’s one important moment in [the film] when [Hellboy] sort of thinks he’s fighting his own people, the outsiders. So, he’s being used by the insiders, which is me, if you like.”

There are some enticing hints in McShane’s words. First off, it sounds like the film is not going to kick off with the birth of Hellboy like the 2004 film. McShane says the movie will go back before that, so we might get even more of an original story for Broom and the Bureau for Paranormal Research and Defense.

Plus, it sounds like things are going to be much more contentious between Hellboy and his dad. There might even be a revelatory moment that makes it seem Hellboy didn’t exactly see the bigger picture as to why he’s fighting demons and other monsters like himself. There was a little bit of that in Hellboy II: The Golden Army but it’s a great piece of conflict for the character.

McShane also made note of the late John Hurt’s portrayal in the original films and speaks to how his take is going to be different but also pays respect to Hurt, who was a personal friend of Hurt’s.

“I’m sort of playing this part as a slight homage to John [Hurt]. I mean, I’m not playing it like him, obviously… but the relationship [with Hellboy] is very much the same.”

We can’t tell you how thrilled we are for this new movie, and McShane’s comments only make me more excited. It all shakes out when Hellboy releases on January 11, 2019.