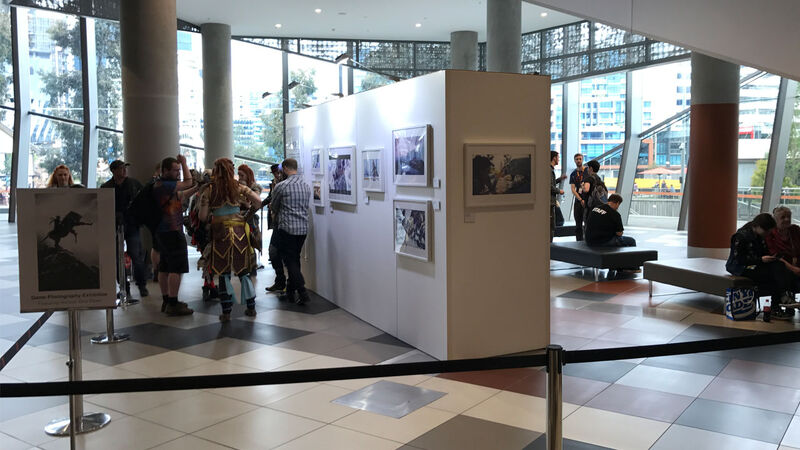 ‘Horizon Zero Dawn’ Has Its Own Art Exhibition at PAX Aus

At PAX Aus right now, there’s a whole section dedicated to Horizon Zero Dawn’s photo mode. Walls with photos are laid out just like a normal art exhibit, and some of the in-game photos are stunning.

The exhibition is organised by the community, but developers were present to give their blessing.

Tim Stobo, game designer at Guerrilla Games, says the team loves the new mode. They even hang their favourite pieces on the walls.

“The photo tool itself wasn’t always planned,” says Stobo. “It was more of a passion project. A few people at work had worked above and beyond to deliver what they thought the photo mode should be.”

There are plenty of virtual photographers within Guerilla Games, but there are also plenty of Horizon fans who’ve made in-game photography their hobby.

“As a developer, I just love seeing people posting photos,” continued Stobo. “I had no idea how we got into this situation where I had no idea our game looked so beautiful.”

Some of my favourite pieces came from an artist behind the site Photo Machina, dedicated to in-game photography. The below shot features one of the long, metal tails of the robotic dinosaurs. I don’t know why, but I love it. Its creator, Drew Taylor, says it’s intended to directly challenge the notion that in-game photography can’t be art.

It’s also interesting to see pieces that challenge the notion that a feature image needs to contain the hero, or be some kind of action shot. This follows through into the world of mainstream gaming media as well, where conventional wisdom is that a cover image of a man with a gun will sell the most magazines.

More and more games are implementing similar features. In-game photography is rising in popularity, and on the technological side, Nvidia’s Ansel is making it easier to pause a game and reposition the camera wherever you like.

As a happy little coincidence, about five Aloys happened to be around the exhibit while a few of the developers were there. We managed to grab this shot: