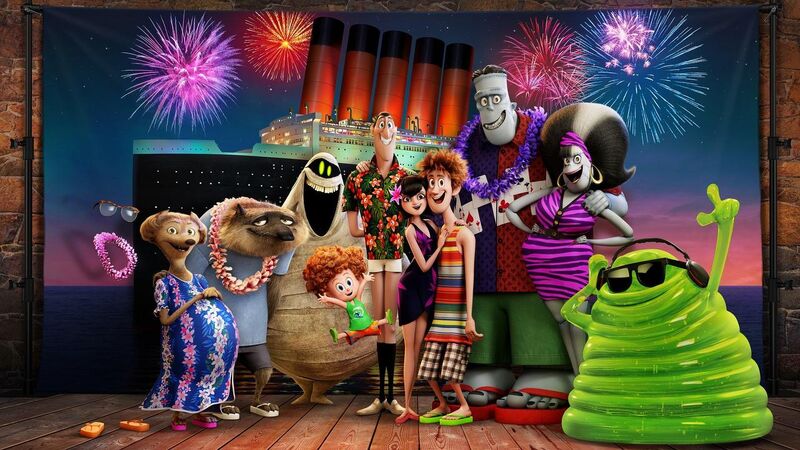 “He was stumped,” Sony Pictures Animation president Kristine Belson revealed to the attendees at CinemaCon 2018 in Las Vegas. ‘Then his in-laws invited him on a cruise for a week. They surprised him. He panicked.”

And thus the idea of sending lead character Dracula (Adam Sandler) on a sea vacation. The premise — “putting classic monsters into a summer movie,” as Belson described it — somehow works.

In it, Drac, his daughter Mavis (Selena Gomez), her husband Jonathan (Andy Samberg), son Dennis, and the Hotel Transylvania staff members find themselves flying to their point of departure on Gremlin Air. Drac doesn’t know about the surprise trip and asks why the family has to take a plane since they can fly (in their bat forms).

Gremlin Air is every traveler’s nightmare carrier — the pilots don’t pay attention; the flight attendants roll over passenger’s feet and spill coffee on them.

After a crazy landing, Drac and his family land at the Bermuda Triangle before getting on the Legacy, a giant cruise ship. Once aboard, they’re overwhelmed by the amenities: Murray the mummy wants a seaweed wrap at the spa (get it, wrap?) while the skeleton tries to swallow the entire buffet to no avail. Meanwhile, grandpa Vlad turns the heads of the widows on the cruise.

Check out more of the antics in the previously released trailer:

Sony Pictures Animation is changing the release date to Friday, July 13, making it a summer release instead of a pre-Halloween release.

Who is your favorite Hotel Transylvania character?