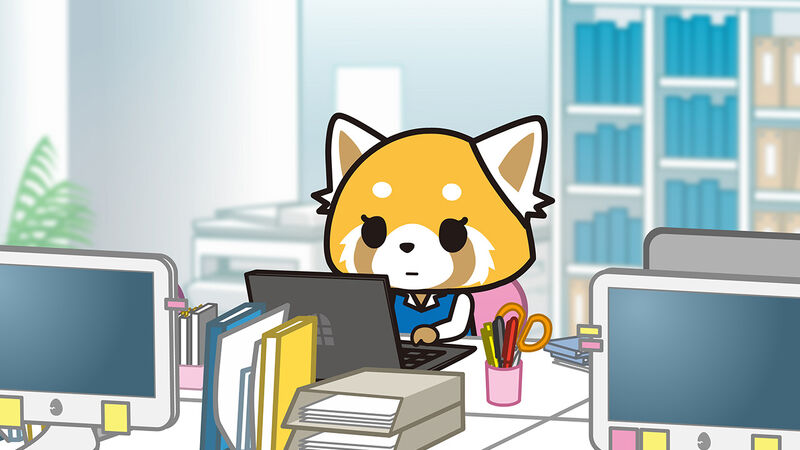 Hell is other people. Or if you’re Retsuko, the lead character in the Netflix anime Aggretsuko, hell is your co-workers: Komiya, the world’s most sycophantic meerkat; Tsunoda, a flirtatious gazelle; and director Ton, an extreme male chauvinist and actual pig.

Aggretsuko’s selling point is its clash of the cutesy and the caustic. A 25-year-old red panda who works in the accounting department of a trading firm, Retsuko is driven to distraction by bulls– office politics, blatant sexism and the sheer repetition of life. Her secret escape from her existence as a soul-crushed corporate drone is the local karaoke joint, where she vents her frustration by screeching along to frenetic death metal.

It’s a slim premise to build a ten-episode, 150-minute series from. Yet Resuko’s daily trials and tribulations will resonate with anyone ill-suited to the stifling drudgery of office life. Her days barely fluctuate. Her commute is a cattle pen of unsolicited coughs, drools and sneezes from strangers, and the routine toil is even worse.

Work is a Panda-emic of Pain

It’s a catalogue of misery, from being chided about mistakes in work that others have manipulated so she gets the blame, to the oppression of her company’s relentlessly misogynistic corporate culture and not being able to stand up to it. It’s a place where power means permission, and pointless tasks (“Tea!” hollers Ton on the rare occasions he’s not practising his golf swing) automatically fall to the meekest female.

So, much like The Office with added fantastical visual flair? Essentially yes, but it possesses the delicate nuance to show how, like many of us, Resuko’s life would better if she could just be a little different. Tsunoda ultimately acknowledges that she’s gaming the system, but our heroine can’t keep up the façade. The carefree approach of her feline friend Puko sounds like a blueprint for happiness, but it doesn’t pay the bills. Even clocking in and grinding away is futile. As one of her searing screams observes, “Team players lose!”

Also subtly conveyed is the anxiety of being an introvert in an extrovert’s environment. Retsuko sweats over countless minor social issues. Sometimes they’re niche concerns (not wanting to look like a metal-loving oddball when joined at karaoke by her upper ranked friends Gori and Washimi), at others they’re more universal (the ratchet-tightening tension of realising you’re out of smalltalk at an out-of-office function). There is, however, the comforting reminder that people care less than you think. When Retsuko dances to distract from the humiliation of being spotted wearing the wrong shoes, she’s baffled by Tsunoda’s disinterest.

While much of the show is driven by how Ton’s relentlessly outdated management style accentuates Retsuko’s fear of failure, it also shows that his era is fading away. When Washimi uses her influence to force the president to warn Ton about his behaviour after Retsuko complains, everything falls into uneasy calm as the boss attempts to fix his ways.

“I never imagined such mass devastation,” thinks Retsuko while pulling a panicked thousand-yard stare. Will Ton discover that she was behind the report? And even if he doesn’t, what will happens when he reverts to type? It all comes to a head in Aggretsuko’s best episode, “The Duel”, which revolves around an office drinking session.

Retsuko needs some assurance that it’s a good idea. But as her role model Gori advises, “It may seem old-fashioned, but developing relationships over drinks is still very effective.”

While Ton still comes across as the worst type of work colleague, the episode hints at the reasons behind his reprehensible nature. He’s a product of his era, a time in which dictatorial direction was considered to be a positive. Everything escalates as the party declines into a drunken karaoke session. Ton spits a battle rap that eliminates any residual sympathy that you may have as he takes aim at his underling.

As is so often the case, Ketsuko is paralysed by fear: the fear of standing up for herself, the fear of causing a scene, the fear of embarrassing herself in front of her colleagues. And it’s made worse by her feelings of failing to live up to the self-determination of Gori and Washimi. But for once, she rages against the machine: “You’re a shitty boss! I hate you so much!”

It’s Not Ideal, But It’s Bearable

What feels like a turning point, however, is merely a continuation. As with many such functions, the big moments and the fine details are immediately lost in a lagoon of beer, wine and shots. Monday is Groundhog Day all over again.

By the time the series finishes, Retsuko has navigated a whirlwind of experiences that young office workers go through. She’s learned about herself, and especially the idiosyncrasies of the culture that surrounds her, yet she’s no closer to an escape.

“Life doesn’t always go the way you expect,” she concludes. “We must work through our discontent and move forward.” The work-sleep-work cycle continues to spin around, and her gradual acceptance of that reality is a bittersweet conclusion. Yet as drums blast and meaty riffs ring out once again, Retsuko’s rage remains an uplifting liberation from her sepulchral schedule.

Season 2 of Aggretsuko is set to premiere in 2019.

Ben Hopkins
Mrbenhopkins
London-based writer who's still waiting for Gremlins vs Withnail to be made.