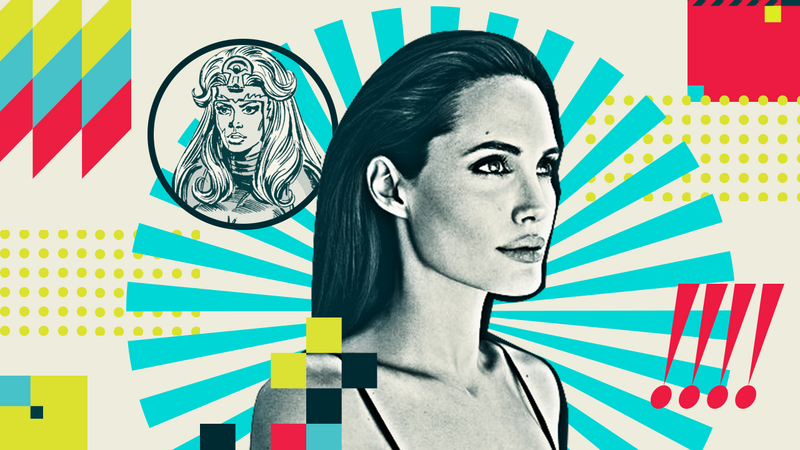 How The Eternals Can Impact the MCU

Eternals are coming to the Marvel Cinematic Universe, but who are they and what do they want?

The Return Of The King

In 1976, The King began his third tour of duty at the House of Ideas. During the first, he and partner Joe Simon created Captain America, while the second involved laying the groundwork for the entire Marvel Universe with Stan Lee. This third go-around came in the wake of a stint at DC Comics where he had been given relatively free reign to write, draw and edit projects like the Fourth World titles, Kamandi, The Demon and beyond. He wanted the same from Marvel and got it, which resulted in brand new titles like Machine Man, Devil Dinosaur and The Eternals as well as runs on Black Panther and Captain America.

Able to truly unleash his creative genius, Kirby explored an uncanny number of topics. With Eternals, he focused those efforts on a previously unseen corner of the Marvel Universe filled with those title characters. As explained in the first issue of the series, a cosmic group called The Celestials — often referred to as Space Gods — visited Earth eons ago, abducted an ape and experimented on the creature. This resulted in three different races: Deviants, Humans and Eternals. Essentially, the Deviants represented chaotic destruction, the Eternals ordered perfection and Humans a mix of the two with potential to go either way.

Way back when, the Deviants ran rampant across the Earth, taking control of the whole planet. When the Celestials returned, the Deviants challenged them and failed. For their arrogance, they were banished to live underground where they continued building awesome destructive weapons. Meanwhile, the Eternals did nothing to stop this and wound up living on top of a mountain in a city called Olympia.

This all remained a mystery to humanity until a man calling himself Ike Harris went on an exploration with Dr. Daniel Damian and his daughter Margo. While investigating an Incan temple, Ike revealed his true identity as the Eternal Ikaris and offered a history lesson just before the Deviants attacked in an attempt to stop the Celestials from returning to Earth. They failed and retreated as the Celestial Arishem, Leader of the Fourth Host, landed nearby.

The newly restored Eternal Ajak (played by Salma Hayek in the film) informed Ikaris (Richard Madden’s role) and the humans that the Celestial would place an impenetrable dome around the immediate area for 50 years and then decide if Earth should live or die. Dr. Damian opted to stay there, but Ikaris escaped with Margo. He first took her to New York City to meet fellow Eternal, Sersi, but then took her to Olympia where she participated in a shared experience among Eternals called the Uni-Mind that helped them figure out what to do about The Celestial.

A Colorful Cast Of Characters

Lead by Zuras, each of the Eternals are effectively immortal and live very long lives. As such, they have the potential to master the very atoms around them for various purposes. Ikaris boasts super speed and eye beams while Sersi transmutes matter, much like some of the mythical witches she inspired. Ajak can commune with the Celestials, Makarri (Lauren Ridloff in the film) runs around at super-speeds, Thena (played by Angelina Jolie) fights like few others and the ever youthful-looking Sprite (Lia McHugh’s role) is known for more than a few pranks.

Meanwhile, the Deviants each come out differently. Lead by Tode, the group regularly tests their own in gladiatorial combat and destroys those left wanting. Kro, a shape-shifter, used his resemblance to the Christian devil to sow the seeds of discontent amongst the humans just coming to understand what’s up with the Eternals, Deviants and Celestials.

Given both sides’ unique make-up and the centuries spent living on Earth, they have inspired any number of myths and cultural touchstones ranging from Circe and Mercury to Zeus and Athena among many others.

Digging even deeper into the mythology, it was established in What If? #24-28 that both the Eternals of the planet Titan — which included Avengers teammate Starfox, the brother of Thanos — and the Inhumans owe their existence to the Eternals of Earth. Tens of thousands of years ago, a civil war broke out between the camps of the Chronos (sometimes called Kronos) and Uranos over whether they should conquer the rest of the world. The peaceful Chronos won and cast his foe and his allies out as a comet of living energy. They landed on a domed Kree city on Uranus, took out a Kree Sentry and began built a spaceship so they could return to Earth. On their trip the Kree caught up to them and destroyed the craft, but they managed to land on Jupiter’s moon Titan. Eventually, Zuras’ brother Alars traveled to Titan and helped build the city. He eventually changed his name to Mentor and fathered two children, Thanos and Starfox.

Meanwhile, one of their number, Arlok, got captured by the Kree. The aliens took him back to their home and began experimenting on him. They discovered that he possessed incredible powers, but also came from the primitive natives of Earth. Curious, the Supreme Intelligence sent a Kree contingent to the third rock from Sol to run their own genetic experiments on the denizens. Over the course of their 25-year mission, they laid the groundwork for another spectacularly powerful Earth-based group, the Inhumans.

Kirby never finished his big plans for The Eternals as the series was cancelled in 1978 after 19 issues and an annual. The following year, Roy Thomas and John Buscema picked up some of those dangling threads and tied them up in Thor #284-301. Since then, many other creators have played with these toys. Peter B. Gillis, Sal Buscema, Walt Simonson and Keith Pollard dusted the characters off in 1985 and 1986 for a 12 issue limited series. They popped up here and there for a while, but legends Neil Gaiman and John Romita Jr. reintroduced the Eternals and Deviants in a seven-issue series that ran from 2006 to 2007. In 2008, Charles and Daniel Knauf worked with Daniel Acuna and Eric Nguyen worked their own brand of magic on the group in a 9-issue series that saw the Eternals interacting with many different Marvel heroes and villains.

Throughout all of these series’ and their appearances in other books, everyone who picked up Kirby’s torch carried on some of the ideas he couldn’t wrap up. They dug deeper into the cosmic history of the Celestials and Eternals, they carried on the complex war between them and the Eternals and worked to carve out a unique space for yet another group of genetically enhanced individuals amongst Marvel’s super people, mutants, gods, aliens and Inhumans!

Of the post-Kirby attempts at rejuvenating the Eternals, the Gaiman/Romita run is probably the most successful. Not only is it available in trade and on Marvel Unlimited, the company’s digital comic subscription service, but it also takes a ground-level approach to these complex characters. In the series, Ikaris finds himself trying to convince the likes of Mike Curry that he’s actually Makarri. Without getting into too many spoilers, someone made all of the Eternals forget their pasts, so while Ikaris travels around trying to remind them in time to deal with a new host of Celestials landing on Earth!

How They Could Fit into the MCU

So, how could all of this fit in with the Marvel Cinematic Universe? Well, we’ve seen nods to Kirby’s cosmic flare, especially on Sakaar in Thor: Ragnarok. The first two Thor films also dealt with the idea of humanity seeing these astonishing creatures and forming myths around them. Most importantly, these first Eternal stories revolve around the discovery of these amazing groups which would make for a solid foundation to another Marvel Cinematic Universe epic. It wouldn’t be much of a leap to see a Celestial landing on Earth and befuddling the Avengers up until the point where Ikaris and company reveal themselves.

Zooming out, the connections between the Eternals, the Kree and Titan are also ripe for exploration. We saw the destroyed version of Thanos’ home planet in Infinity War. Even though it was it down planet and not a moon of Jupiter, there still could be survivors like Starfox zipping around space somewhere. These elements could come into play either in an Eternals film or even the more cosmic projects like future Guardians of the Galaxy or Captain Marvel installments.

Even better? Two different Eternals have served on the Avengers team in the comics! First up was Gilgamesh, played by Ma Dong-seok in the upcoming film. In the comics, Gilgamesh began using his super strength and fighting abilities with the team in Avengers #300, part of the demon-filled Inferno crossover. He didn’t spend too much time as a member, but did fight threats from within and beyond the Earth. When Gilgamesh was badly injured, the Avengers brought him to Olympia where they met Sersi. She impressed Captain America so much that he asked her to officially join the team in Avengers #314. Sersi accepted and served with the team for nearly every adventure they had through #375.

Could one of the cinematic Eternals end up joining Earth’s Mightiest Heroes eventually? We’ll see what the future of the MCU holds.