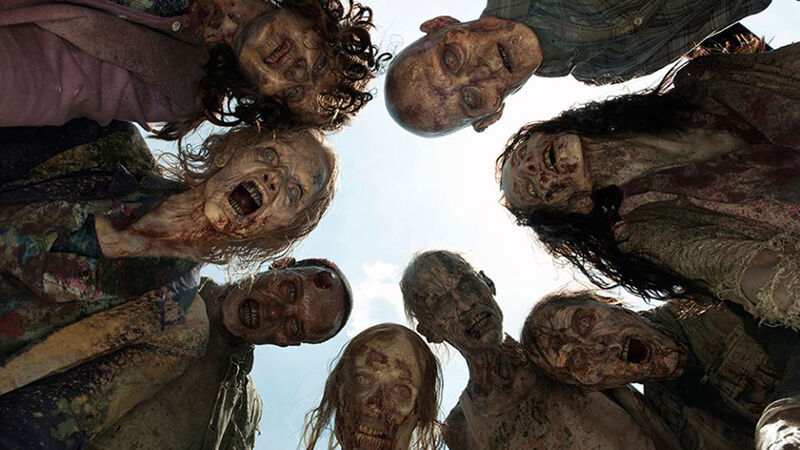 How the Walkers Have Evolved in ‘The Walking Dead’, Season By Season

As The Walking Dead has progressed, so has its undead. Although walkers are reanimated corpses and therefore exempt from many of the normal rules that apply to the living, they are still affected by decay, much like a regular decomposing corpse, and environmental factors.

At the start of The Walking Dead, a few weeks into the zombie apocalypse, we saw a lot of freshly turned walkers bearing a close resemblance to the living. But as the seasons have worn on, walkers have changed exponentially, reflecting the passage of time, among other factors. Here’s our season by season look at how walkers have changed in The Walking Dead, illustrated with some of the most memorable walkers ever to grace the show.

In Season 1, the vast majority of walkers exhibit a comparatively small degree of decomposition. When Rick encounters the Teddy Bear Girl Walker in Episode 1, he thinks she’s a regular child. It’s not until she turns around and comes at him that he realizes she’s not the sweet young girl he took her to be.

Clothing is in pretty good nick at this point so aside from a deathly pallor, diseased-looking eyes and any wounds they might have sustained, many of the walkers can almost be mistaken for living people. Actors were probably looking at a fairly minimal amount of time in the make-up chair.

One of the season’s most notable walkers was Andrea’s sister, Amy, who turned and was then put down by her distressed sibling. There’s also Morgan’s wife, Jenny, who looks near-enough human as she wanders aimlessly outside her former house.

You start to notice a bit more deterioration by Season 2. Eyes are bloodier and more yellow, while flesh is looser and more visibly coming away from walkers’ bodies.

In Season 2, we got a glimpse at what immersion in water does to their bodies. Note the bloated, relatively well-preserved Jabba the Hutt-esque Well Walker that claws at Glenn as he dangles down a well from a rope.

The season is also notable for Carol‘s daughter Sophia’s heartbreaking return to the screen as a zombie. Other memorable walkers include the Mud Walker, which Carl fails to kill and which winds up coming back to get Dale; and Michonne’s armless, jawless Walker Pets.

Skin is distinctly greyer in Season 3’s walkers and eye sockets and cheeks are more hollow. They generally look less fresh as if they’ve not only died and decayed but have been through the mill a bit more. Perhaps they’ve been attacked by humans or other walkers before turning. They’ve got noticeably grislier injuries.

Season 3’s notable walkers include the Riot Gear Walkers encountered by the group, as well as the Governor’s creepy collection of undead heads in tanks. Not to mention his daughter.

It’s also the season we lost Daryl’s brother Merle to the other side. As Daryl saw off his walker bro, we watched the fan-favourite cry real tears.

In Season 4, the deterioration continues. There’s plenty of flesh hanging off in this season, and clothing is visibly more shabby. Hair has thinned substantially while teeth have rotted away more.

Season 4 introduced the first Burned Walkers: “I kept using the analogy of putting a hotdog in the microwave and cooking it so much that the outer skin is black but the underside of the meat that’s not cooked looks pink,” said series producer Greg Nicotero.

The Tree Stump Walker was another highlight. Trapped by a falling tree, it had merged with its surroundings and was covered in moss and other vegetation.

Walkers are falling apart more readily by the fifth season. They’re far removed from their human-like counterparts from Season 1 at this point. What flesh is there is often a mushy or dried-out grey-brown hue. Walkers are far less intact too – noses are more frequently missing and jaws are hanging off.

There are also more walkers that look like skeletons, although Greg Nicotero has said that actual walking skeletons will never come to fruition in The Walking Dead. It’s to do with the fact that you need muscle present to move bones.

The show ups its innovation game this season, bringing us the pinky-toned Napalm Walker and the uber-repulsive Pantry Walker. Also, remember the Flaming Walkers and the Wolves Truck Walkers with ‘W’s carved into their foreheads?

In the sixth season, walkers are even more disgusting and frightening in appearance. Skin is frequently sloughing off now. They’re more skeletal, with more bones on show.

This season ups the ante in terms of bringing us unprecedented numbers of walkers. It’s in Season 6 when the group comes across a quarry filled with a staggering 30,000 walkers.

Memorably, there’s the walker which squeezes through the gap between two trailers. We see his skin tear off and his ribs break. The Chain Walkers too gave us something new – a novel way in which walkers were used defensively. This is something that has been increasing in frequency as the series has progressed.

The Wrightson Walker also makes his debut in Season 6. Named after comic book artist Bernie Wrightson who pioneered the look of the zombie in the 70s and 80s, the Wrightson Walker pays tribute to its namesake, featuring a caved-in area between the bottom of the rib cage and the pelvis.

Oh, and let’s not forget the slimy, putrid Sewer Walker encountered by Maggie.

Seven seasons in, there were no signs of slowing when it comes to the continued reinvention of walkers. It’s difficult to imagine zombies that are even more decomposed than Season 6’s motley crew but the show’s creators haven’t held back in terms of invention.

Season 7 brought us the pasty-skinned Pond Walkers that Rick and Aaron find themselves battling from their leaky boat, as well as those desiccated Sand Walkers that Tara disturbs.

Eugene also comes up with a novel way of fortifying Negan’s captured walkers – by pouring molten metal over their heads and letting it set.

Most remarkable of all, though, is the junkyard gang’s resident walker – good old Winslow, the Spiked Walker that Jadis pits Rick against in the makeshift fight arena.

In Season 7, we also saw Sasha as a walker in that pretty epic reveal.

If there’s anything we’ve come to expect of The Walking Dead it’s that it will continue to surprise us when it comes to walker evolution. Season 8 stepped up a gear as zombies continue to decay, and come into contact with nature and other substances.

Season 8 Episode 2 brought us the Robocop ‘Emil’ tribute walker, which, according to Greg Nicotero, was meant to “honor the amazing work of Rob Bottin” who worked on the toxic waste-ravaged body of Paul McCrane’s bad guy Emil in Paul Verhoeven’s 1987 sci-fi classic.

A couple of episodes later, we’d see more toxic waste walkers when King Ezekiel, Jerry and Shiva find themselves in a bind. Nicotero took to Instagram to explain that they achieved the horrifying effect using bleach.

We might never have seen a walker in a bathing suit on the show but Season 8 did go and give us the chance to see the first naked walker.

“There’s an episode where we did our first fully nude walker. We’ve never done that before,” executive producer Greg Nicotero told Entertainment Weekly.

You couldn’t tell whether the walker in question was male or female, as decomposition had obscured the genital area, and sagging of flesh and general deterioration also rendered the chest area indiscernible.

This season also brought us mouldy walkers – they’ve certainly been undead long enough by this point to have attracted mould colonies –and the special make-up effects didn’t disappoint. Nicotero explained, again via Instagram, that latex “open eye” prosthetics were used to simulate mould growing over a shriveled eyeball. Nice.

Into the current season, and walkers are looking more alike than ever, with ratty, matted destroyed hair and skeletal faces. Hollow eye sockets are visible, along with gaping mouth cavities. They look more dried out than ever.

Notable zombies thus far into the season include Jadis’s ‘Armless Heaps Walker’ – you know, the one she used to threaten Father Gabriel in Episode 4. This effect was achieved by getting the actress playing the zombie to hold her arms behind her back, while the effects team added stumps to simulate missing arms.

Episode 5, meanwhile, will undoubtedly be remembered by most for it being Rick’s last in the series. But actually one of the most striking visuals in the entire episode was the burning lemming walkers falling to their watery fates in the river below after Rick blows up the bridge.

With every season switching up appearance and introducing standout walkers that raise the bar, as the show moves into a new era, it will undoubtedly bring us even more iconic walkers to leave audiences slack-jawed.