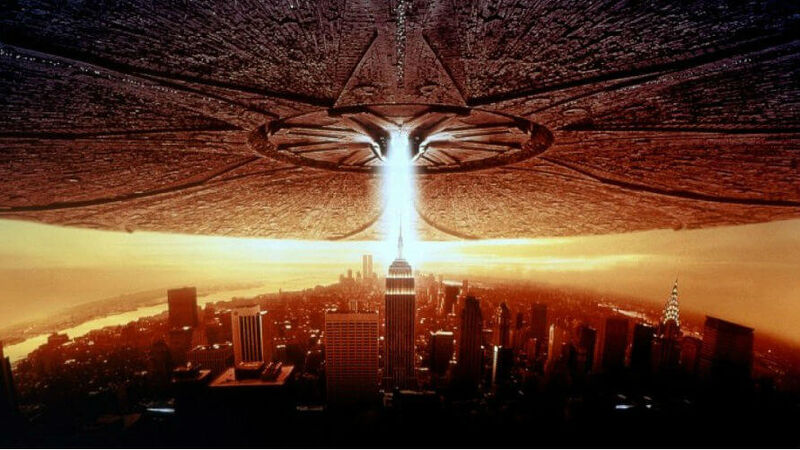 Why ‘Independence Day’ Is the Perfect Blockbuster

1996’s epic sci-fi disaster movie, Independence Day, remains very much a love-it-or-hate-it movie. Despite being the second largest blockbuster of the ’90s (behind only Jurassic Park), critically its reputation is mixed. While the shot of an alien space ship exploding the White House is an iconic moment of movie history, Independence Day is nobody’s concept of great art. Critics have lambasted Roland Emmerich’s tale of alien invasion and American heroism as stupid nonsense. Independence Day is a movie with thin characters, a pandering script, and more special effects than brain cells. Perhaps thanks to Independence Day‘s mixed critical reception, it took us twenty years to finally get the long overdue sequel, Independence Day: Resurgence. Even admitting that it is a very dumb movie, we also must admit something else: Independence Day is the perfect summer Blockbuster movie. Its pacing is brilliant, the effects still hold up, the mood is cheerful, and it has awesome action. That’s everything a blockbuster needs, done perfectly.

Seemingly Independence Day is inspired by classic alien invasion stories like War of the Worlds. But structure-wise Independence Day is a prototypical disaster film. Previous films of the genre gathered a diverse cast together into a single confined space:  an airplane, a cruise ship, or a towering inferno. Independence Day ambitiously attempted to massively expand the disaster film formula into a national epic. It is not just an inescapable doomed location, it is an inescapably doomed planet. And America is the star.

The large cast, though often broadly written and relying on the occasional stereotypes, attempts to cover the entire population’s experience of living through an alien invasion. This is from the very top of power with President Whitmore (Bill Pullman) to drunken losers like Russell Casse (Randy Quaid). Emmerich, in a tone that is very positive towards his adopted country, attempts to show the diversity of the United States as a strength. Jewish computer nerds like David Levinson (Jeff Goldblum) work together with African American military pilots like Captain Steven Hiller (Will Smith) to defeat the alien threat. As much as Roland Emmerich is criticized for not making the brainiest of SciFi films, his hopeful tone for a bright united future is a good contrast to a movie that would otherwise be dark, dour, and unpleasant. This is a cartoon version of the United States, but it is a cheerful cartoon.

Later directors of Roland Emmerich’s mold, such as Michael Bay, would use their stereotypes in a hateful mocking manner. Take, of course, the infamous “wigger” robots from Transformers: Revenge of the Fallen, written with nothing but contempt. Emmerich does not seem to hate the people who are not “normal”. Even his Jewish stereotype, Julius Levinson, played by Judd Hirsch is not a fool. He turns out to be a man of honest faith and a loving father. Julius is strange and ridiculous and different, but in his own way he has something to contribute to saving the world.

Spectacle, of course, is what people remember best from Independence Day. Twenty years later after so many other special effects marvels, Independence Day still holds up with exciting visuals – we already covered this subject at length here at Fandom earlier this week. Roland Emmerich would spend his career attempting to top the moment of three American cities being annihilated in flame at once. All the digital power in films like The Day After Tomorrow or 2012 freezing or melting the entire planet would not top them. Part of this is that Independence Day did it first and thus captured the pop culture imagination in a way that copycats could not, but that is not the whole story.

A good reason why Independence Day beats those later imitators is its ability to flawlessly build up tension towards its most iconic moment. The rising anticipation works so well here in ways those other movies do not. From the opening shots of the Alien Mothership above the Apollo Moon Landing site to the moment the ships open up and reveal their antagonistic intentions, Independence Day pushes forward towards its huge first act climax. This part of the film is a busy jumble of character introductions and telecommunications as every person in the film tries to make sense of what is happening. The anticipation builds up to crazed levels as the character of David introduces a countdown to the final stunning reveal.

But it also sees some of the most interesting cinematography of Independence Day. A recurring shot is the use of shadows crawling over American cities as alien ships takes their positions before the first attack. A great montage shows chaos in the New York streets as the citizens staring upwards in the classic Spielberg Face in awe of massive ships the audience cannot yet see. The final reveal of the space ships charging their lasers is a confusingly beautiful scene of elegant flower-like designs opening up in blue light. The sudden pounding of the attack through the monuments is like a punch in the face; an unforgettable movie moment.

With the evil of the villains clearly demonstrated, Independence Day now moves to a standard second act of increasing desperation, and then to a final act of ultimate victory. This is not sophisticated storytelling: the heroes lose a lot until they think up a plan to finally win. It is a movie that is built from the ground up to propel the audience to ‘rah rah’ emotion against the faceless enemy. The politics of Bill Pullman’s character deciding that Independence Day is now a world holiday are murky, but damn it is a good speech. Only cynics find it hard to not cheer at “today we celebrate our Independence Day!” Independence Day makes Marks of us all.

The last act is where Independence Day clearly shows off what it has borrowed from previous blockbusters. The battle over Area 51 has all the rhythms of a Star Wars space battle with jet fighter imagery borrowed from Top Gun and alien designs that have more than a little H.R. Geiger influence hiding within. Meanwhile, Jeff Goldblum in outer space is quoting himself (“must go faster, must go faster”) from Jurassic Park. It is a Frankenstein mixture of what has worked before, but learning the right lessons from those films.

You can judge Independence Day for being a lot of things it isn’t. It is not particularly insightful of real politics in America, nor is it going to leave you with lasting life lessons. But Independence Day was not trying to be smart, it was trying to be fun. It’s incredibly silly positive theater for the right frame of mind looking for pure entertainment. Twenty years later  the film still holds up as solid two and a half hours of popcorn Blockbuster trash.

But it’s a good kind of trash.