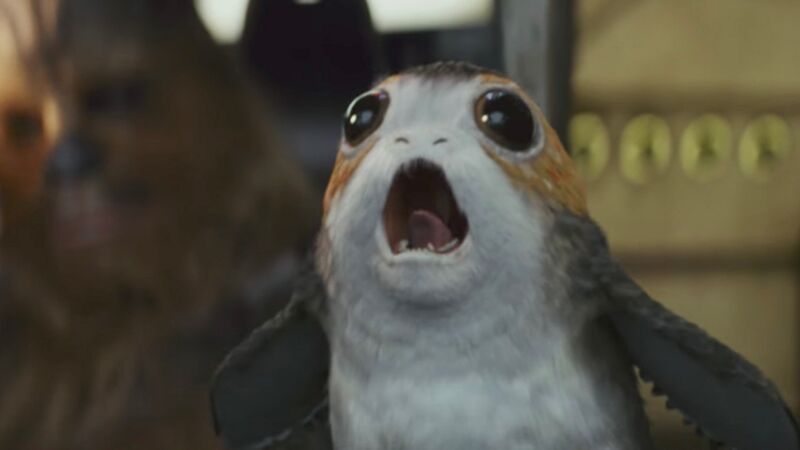 ARTICLE UPDATE: With a new Star Wars: The Jedi trailer being released overnight, people are once again going crazy for the porgs. So the following are the best new Tweets — both positive AND negative — concerning the galaxy’s cutest new creatures…

How are we supposed to do anything BUT think about Porgs all day? #Porg #porgs #StarWarsTheLastJedi pic.twitter.com/qPJMzb3jO3

This is the poster some see #StarWars #TheLastJedi #porg pic.twitter.com/2XqsgCTS7F

What did I learn from the new #TheLastJedi trailer?

Porg is the new Han Solo. You can't tell me otherwise.

THANK YOU THIS IS WHAT I WANTED. They are friends, he is not eating them, they are pals and they go on adventures right?#porg #TheLastJedi pic.twitter.com/idVFsHzEQi

BB-8 is literally a has been from 2015 now that I've seen this #Porg. I want one! 😍#TheLastJediTrailer pic.twitter.com/XMBexRaJuI

#porgs are the dumbest creations. Period.

#Porgs everywhere but everyone should be speaking about these glorious beasts! Ice Foxes / Wolves / Hyenas! #StarWars #TheLastJedi pic.twitter.com/Aqdr8gt8Uq

ORIGINAL ARTICLE: A bunch of new stills from Star Wars The Last Jedi were released week, including a picture of the galaxy’s cutest new critters, the porgs.

According to Entertainment Weekly “These penguin-like wide-eyed creatures are native to the planet of Ahch-To, site of the first Jedi temple.”

Director Rian Johnson says he was inspired by what he found when shooting the end of The Force Awakens on the Irish island of Skellig Michael. “If you go to Skellig at the right time of year, it’s just covered in puffins, and they’re the most adorable things in the world” he told EW. “So when I was first scouting there, I saw these guys, and I was like, oh, these are part of the island. And so the porgs are in that realm.”

But while they are pretty adorable, the Internet isn’t so sure, with the porg backlash kicking off as soon as the creatures debuted.

Noimnotonacid compares the porg to Jar-Jar Binks, writing “Uh oh that cute alien with chewbacca has potential for annoying taglines, youssa knossa what I meena?”

And over-thinking it a bit, pleasefeedthedino says “He looks haunted. It’ll be a good contrast to Rey’s enthusiasm.”

Summertime and the livin' is easy. Jedi jumpin', no First Order in sight. So hush little Rey, don't you cry. #Porg&Bess #PorgPoem pic.twitter.com/6UdzBEYyQc

And there are even some lookalikes hitting the net.

I made a #porg (her name is Gabby)! More #porgs to come later pic.twitter.com/obxBDqL0kT