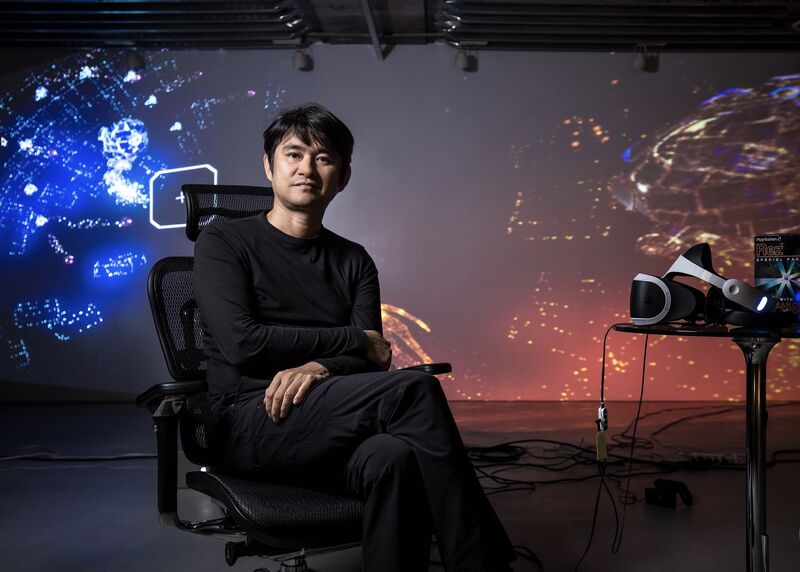 After growing up watching sci-fi movies and pining for a VR future, the last couple of years have finally seen that distant dream become a (virtual) reality. Yet, despite the likes of Oculus Rift and PlayStation VR boasting cutting-edge tech, it’s a 15-year-old Dreamcast port that’s really been wowing headset-owning gamers. The game in question is, of course, Rez: Infinite. Playing like your very own polygonal acid trip, this ageing rhythm action game somehow manages to feel like the future of gaming.

With Rez finally making its way to PC last month, we were eager to find out why this forgotten classic is turning heads once again over a decade later. We sat down with the game’s legendary creator Tetsuya Mizuguchi to talk VR, Japan and gaming’s future.

15 Years Later, ‘Rez’ Is Finally the Game It Was Always Meant to Be

Despite true virtual reality being little more than a dream in 1998, Mizuguchi-san says he always knew that Rez’s spellbinding world was made to be experienced with a headset.

“I think that my biggest motivation to remaster and recreate Rez was because when I made it, I felt incredibly frustrated,” he reveals. “I always had imagined what I wanted Rez to be, like you’re shooting and you’re flying in cyberspace and you can fully look around this crazy world. But the reality was we had to make the game in a square, narrow world, and cram everything in it, you know, the UX, UI etc. So when I released Rez on Dreamcast in 2001, I decided that someday I want to remake it when we finally have the right kind of technology. I’ve been waiting 15 years, but finally, we have that kind of technology.”

While experiencing Rez in VR is always a pretty trippy experience, the game’s earlier levels are nothing compared to the mind-boggling majesty of its new final level – Area X. Doing away with the rigid, tunnel-shaped areas of previous stages, Area X finally takes players off-rails, letting them soar around freely through space as the game’s hypnotic trance soundtrack builds to a glorious crescendo. Built with VR in mind, Rez‘s previous landscapes filled with geometric shapes give way to beautiful particle effects that explode around you, making floating around Area X an essential VR experience. For Mizuguchi, however, this special stage is more than just a nice new addition.

“To me, Area X is like a blueprint for VR’s future,” he suggests. When we ask what other VR games have impressed Mizuguchi-san, however, his answer isn’t what you might expect.

“Other VR games that have impressed me? No, there are none,” he says with a shrug.

The reason for that, he explains, is that he believes not enough developers are using the medium to create something truly new: “We want to create a new experience with this new technology. Rez, this is like a lifework for me. Lumines, even Child of Eden, all of this feels like part of the same goal to me – to make a synaesthesia. I want to make a completely new type of experience with all this incredible technology.”

Unfortunately, though, it doesn’t seem like other Japanese developers feel the same way. Despite PlayStation doubling down on virtual reality with PSVR, Mizuguchi-san is actually one of the few notable developers in his home land who’s working on VR games. When asked why this was, Mizuguchi had a pretty stern answer.

“Japanese developers don’t want a challenge. Everybody over there is watching smartphone gaming saying ‘this is how we make money now’. It’s sad,” he explains with a sigh. “After the console crash in Japan many people moved to smartphone. With lots of gamers in Japan playing mobile games, developers and companies started focusing on mobile phone game development. So, that was really bad for the Japanese industry when it comes to new platforms, like VR.

“Japanese companies tend to be very risk averse, so new technology, new platforms, creating new content for something like that, even if it seems like it can be major in a few years – they’d rather not take the risk. Personally, I see [smartphone] gaming like eating a candy bar. Candy bars are quick to eat – junk that don’t really satisfy you- this is why Japanese developers are losing a lot of creativity.”

Unsurprisingly, Mizuguchi reveals that Rez isn’t the last VR project you’ll see of his. Yet, thanks to the ever changing nature of technology and the difficulty of creating for such a new medium, it may be some time before anyone can actually play it.

“These are the difficult first few years for developers. [VR now] is like the transition from 2D to 3D. So, this is not easy, but we have to figure it out to, you know, cultivate the next VR era. My aim is to figure out how we can create a new type of synaesthesia which is high-def, high-res. So, we are making an engine now called Synaesthesia Engine. We are already using it on a new project and it’ll be a key part of our future plans,” he pauses and smiles. “ I have many plans [for VR]… many plans.”