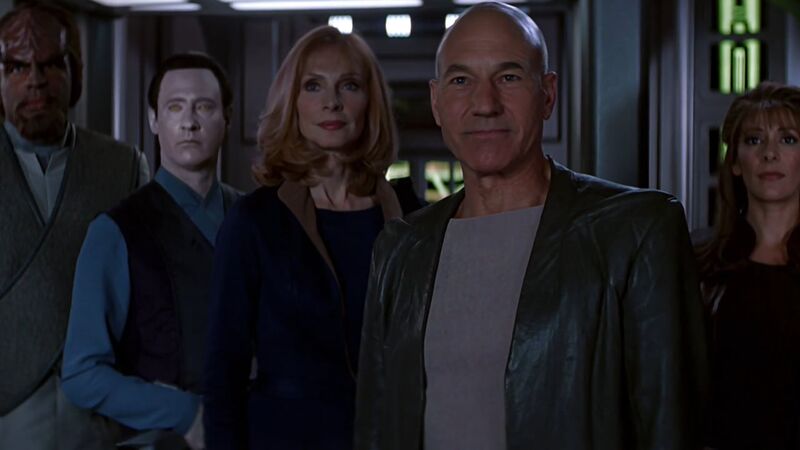 Is ‘Star Trek: Insurrection’ Worth a Second Look 20 Years Later?

2018 marks the 20th anniversary of the ninth Star Trek film, Insurrection, the third outing for the cast of Star Trek: The Next Generation (TNG) following the universally-acclaimed First Contact. The film opened to mixed reviews and is not generally considered to be one of the franchise’s better instalments. But does it deserve this reputation? Let’s look back at this oft-forgotten entry in Star Trek canon.

While Star Trek TV shows excel at delivering thoughtful commentary on current events, the movies often struggle to do the same. With the exception of The Voyage Home’s explicit “Save the Whales” message and The Undiscovered Country’s metaphor for the collapse of the Soviet Union, attempts to be overtly thoughtful tend to be less effective than simply integrating some subtext. Just consider the heavy-handed moralizing of Into Darkness versus the more casual approach of Beyond.

This explains First Contact’s success. While the movie had things to say about destiny, revenge, and humanity creating a brighter future for itself, it was primarily a fun action movie. Insurrection, on the other hand, sets itself up for failure by being all about the message. Not only that, but the message itself almost begs the audience to reject it. It argues that preserving the way of life for a mere 600 people is more important than helping billions of people in a time of war.

Insurrection deserves credit for such a bold stance. Its core message is an indictment of some of the most horrific atrocities in human history, from the slave trade to the Trail of Tears. Some audience members and critics rejected the morality play, arguing that 600 people represent stakes that are too low to justify Picard’s rebellion. But Insurrection anticipates the criticism and gives Picard the ultimate retort. He questions the admiral’s reasoning, asking him how many people must be affected by his decision before it becomes wrong.

The Contrast With Deep Space Nine

One can gain a deeper appreciation for Insurrection‘s message by placing it in context with the rest of the franchise. In 1998, Deep Space Nine (DS9) was midway through its seventh and final season. The Dominion War had been raging for almost two years. Audiences had watched Captain Sisko and his crew fight on the front lines and make sacrifices that Picard and his people had never had to make.

The scene where Picard decides to violently resist the relocation of the Ba’ku is compelling because of a (likely coincidental) parallel to the worst thing Sisko ever did. Picard, alone in his quarters, slowly removes his rank pips, and when we see him next he’s in civilian clothes.

Picard and Sisko represent two sides of a debate that Star Trek revels in. One could argue that Picard and his crew, who are never referenced during the war storyline in DS9, and don’t seem to be anywhere near the front lines, are making their choice because they have the privilege of not seeing how desperate things have gotten. Or you could say that it is Sisko who is wrong and that the Federation cannot survive if its surrenders its moral high ground. It’s a dichotomy that Star Trek keeps revisiting, and Insurrection carries on that tradition.

A Mixed Bag in the Execution

The main “guest stars” of the movie — Donna Murphy as Anij, F. Murray Abraham as Ru’afo, and Anthony Zerbe as Admiral Dougherty — all turn in solid performances. So, too, does Gregg Henry, who does good supporting work as Ru’afo’s subordinate Gallatin.

And the film gives most of its principal cast material to work with, including a subtle, moving performance from LeVar Burton in a scene where Geordi sees his first sunrise. But it largely fails Marina Sirtis and Gates McFadden, who end up with very little to do. While it’s not as egregious a waste of talent as Nemesis, it’s still a letdown.

As for the action, it’s mostly pretty good. Some fans may find Riker’s “manual steering column” a bit ridiculous, but you’ll never convince us it’s not awesome.

Fans may also criticise the admittedly bizarre action sequence in which Picard defeats a malfunctioning Data by singing Gilbert and Sullivan. They shouldn’t, because the scene is fantastic, but they might.

But it must be acknowledged that some elements do not hold up well. Insurrection was the first Star Trek film to use CGI for all its visual effects, including the rendering of the starships. Unfortunately, in HD many of the space shots are noticeably computer-generated and look unfinished.

On top of that, some of the sets, particularly the bridge of Ru’afo’s flagship and the interior of the Son’a collector ship, look incredibly cheap. For a franchise that has always been able to maintain appearances even when budgets are tight, the aesthetic of Insurrection is a disappointment that sometimes takes you out of the experience.

Insurrection isn’t the best film starring the TNG cast — that honour definitely belongs to First Contact. But it’s better than Nemesis, Generations, and even The Final Frontier (because all the other Star Trek movies are). For fans who loathed Nemesis, Insurrection is the perfect send-off for the TNG crew.

It shows them at their best — funny, thoughtful, and unafraid to deal with the complex themes that made the TV show so important. It deserves, on its 20th anniversary, a second look, and maybe some renewed appreciation from Star Trek fans.