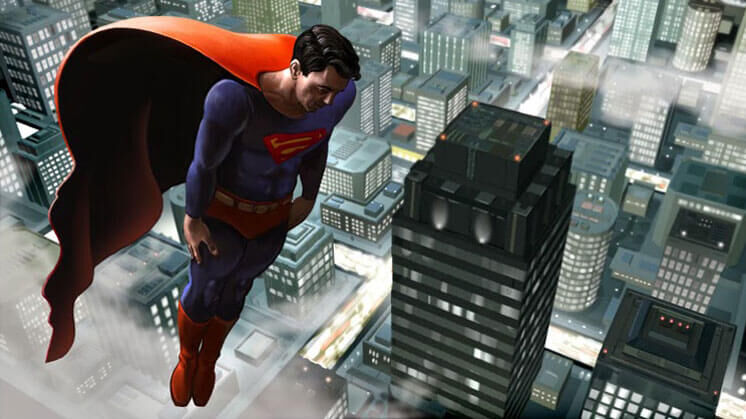 Before he revitalized the worlds of Star Trek and Star Wars, J.J. Abrams was almost an integral part of rebooting the granddaddy of all superheroes, Superman. In the ’90s and early ’00s, there were numerous attempts to bring the Man of Steel back to the big screen, but Abrams’ version – titled Superman: Flyby – is one of the more intriguing and bombastic takes out there.

Abrams’ story follows a familiar template at first. Most of the film’s first act focuses heavily on Clark Kent’s upbringing and how he deals with his emerging powers. It’s what you’d expect: young Clark leaping through the Kent household or naively flinging a couch out the porch window. Abrams plays out lots of recognizable beats – Superman’s first outing involves saving an aircraft, much like his reveal in Richard Donner’s Superman: The Movie and Superman: The Animated Series – but it’s when the story expands that the weirdness really takes hold.

Probably the biggest deviation has to do with Krypton. In Superman: Flyby, Krypton has not been destroyed. Jor-El is no longer a scientist predicting the planet’s imminent explosion. Instead, he is the king of Krypton. His brother, Kata-Zor, deposes him at the start of the film as Jor-El and his wife, Lara, send their baby out into space to save his life. Abrams develops a very thinly-crafted prophecy involving “two princes” who will leave Krypton, and only one will return. The other prince is Kata-Zor’s son, Ty-Zor, a malicious warmonger who is practically General Zod in everything but name.

There are some truly bizarre elements such as a psychic connection between Jor-El and Kal-El that leads to a goofy resurrection sequence. Not to mention that Jor-El visited Earth years ago and investigated the Kents, specifically choosing them to raise his son. The changes feel like they are all in service of creating the kind of fated interconnectivity that Abrams is famous for putting into his stories.

Big changes were made throughout the various drafts of the project. At one point, Lex Luthor would have been revealed to be a Kryptonian. The final battle between Superman and Ty-Zor originally spanned the entire globe, including a brawl that plowed through the pyramids of Giza. Eventually, the fight localized in the streets of Metropolis. But you can tell that Abrams wanted to go as big as he could.

What’s truly shocking is how much Superman: Flyby actually influenced later Superman films. Superman Returns lifted an entire action sequence from Abrams’ script; the experimental space plane that Lois is on is taken directly from an Air Force One set piece in Flyby. It’s also easy to draw parallels between Kata-Zor/Ty-Zor and Man of Steel‘s General Zod. The entire Kryptonian civil war element is present in Flyby. Man of Steel simply added the planet’s famous destruction. There’s even a giant robot in Flyby that is burrowing a hole into Earth which will destroy it. Sounds a bit like Man of Steel‘s World Engine.

Ultimately, Superman: Flyby was caught between feeling too familiar and too radical at the same time. With the exception of a brief encounter in college, the events between Clark and Lois are lazy retreads of Donner’s film. Luthor is an incredibly lame villain who takes a backseat to Ty-Zor and all the wacky Kryptonian shenanigans. However, Clark is the best thing about the script. He has a boyish and naive sweetness to him that has never really been captured in a film version. It’s a shame Brandon Routh or Henry Cavill didn’t get to play this version of the Last Son of Krypton.

Oh, did you know that both of them screen-tested for Superman: Flyby? Check it out!

Here are a couple of pieces of concept art which include ideas for Superman’s costume:

They even manufactured a full suit at one point!

Eventually, the project took on a totally different form when Bryan Singer came on board. His love of Donner’s Superman meant even more fealty to that version of the character. Abrams’ take was left in the dust. Would it have been good? Maybe. But we’ll never really know. Superman: Flyby joined Batman: Year One in the annals of unmade DC movie history.