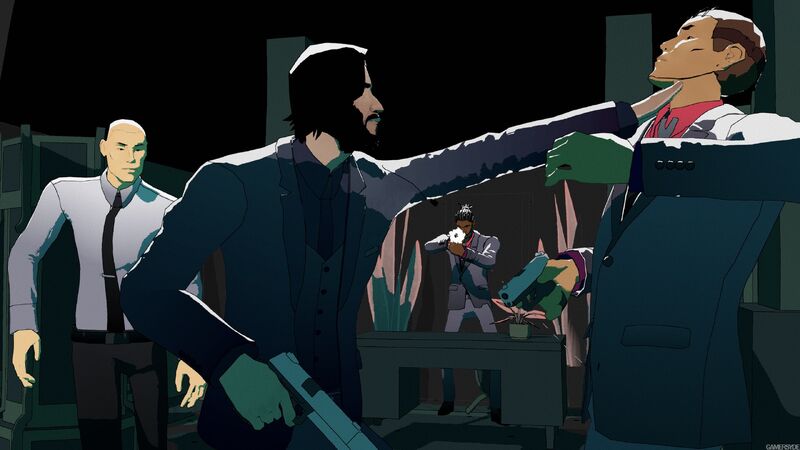 From John Wick Hex to Blair Witch: How Lionsgate is Reinventing the Game Tie-in

With the first ever video game tie-in created by Monopoly makers ‘The Parker Brothers’, it’s hardly surprising that games are often treated like cheap toys. Just as film studios hurry the latest action figures onto shelves in time for their new blockbuster, for decades, film publishers have loaned their precious IP to game studios equally absentmindedly.

It’s why Atari famously rushed and released an E.T. game so bad, that it was forced to bury hundreds of thousands of unsold copies deep in a landfill in New Mexico.

Thankfully for gamers (and the sake of the planet), the quality of licensed games has drastically improved since the ‘80s. Where the mid-2000s saw publishers like Activision and Akklaim continue to spew up countless truly pungent move tie-ins, Warner Brothers decided to do the unprecedented and take its precious IP into its own hands. The result? The ground-breaking Arkham Asylum.

Like the in-house Lucasarts games before it, Rocksteady’s seminal series showed that – given the right love and care – licensed video games didn’t have to be just throwaway fun – they could actually compete with the best that the medium had to offer.

Yet, as great as these games were — they were very much separate entities from their big-screen counterparts, made at arm’s length from the IP holders they were meant to be working with. It wasn’t until 2018 that gamers saw a film publisher truly treat its gaming output the same way it did its movies.

Taking centre stage at the world’s biggest gaming conference, Lionsgate surprised the world by revealing a new game based on its beloved Blair Witch franchise. The best part? Just like the film that inspired it, this game was to be made by a scrappy little indie studio.

Designated to Poland’s Bloober studios, the creators of Layers of Fear, it was the first time in recent memory that an industry-leading film publisher had collaborated with an indie game developer. It turns out, Bloober team were just as shocked as fans were.

“It was really exciting to be able to work with such a huge IP,” says the game’s writer, Barbara Kciuk, “You get people assuming that you’ll just make a cheap cash-in, but this time we really got this freedom, we really got the chance to tell our own story,”

Unlike most licensed video games where a publisher hurriedly demands that a studio turn around a rushed movie companion, this was a standalone experience. And more importantly, Kciuk says the whole process felt like a true collaboration.

“I wouldn’t say that [Lionsgate] approached us — it was more of a collaboration, really. They didn’t tell us what we had to do. They gave us massive artistic freedom in what we wanted to portray in the game because they knew that our studio isn’t known for survival horror like the films are, we are more known for psychological horror — and Lionsgate were cool with that. They told us that we could just tell our own original story in this universe and we had to take the chance.”

Sitting at a middling 67 rating on Metacritic, the misunderstood Blair Witch might not have got exactly the response that either dev or publisher hoped for. Yet, with Blair Witch no longer being the powerhouse franchise it was in the early 2000s, taking a risk and giving an indie studio the keys to this relatively stagnant IP made sense.

It was Lionsgate’s announcement of John Wick Hex a year later, however, that really turned heads.

Racking in hundreds of millions of dollars at the box office, and spawning more memes than you can shake a murdered doge at, the Keanu-led action franchise is undoubtedly one of the biggest blockbusters in entertainment. Yet for Wick’s first video game, Lionsgate didn’t do the expected and bring in a 200 strong studio to craft a shiny AAA epic – it went for a lone indie developer.

“It was genuinely surprising people were letting me do it,”, recalls the creator of John Wick Hex, Mike Bithell, from his living room. Having gone from making obscure indie games to somehow being handed the keys to one of the most desirable IP in entertainment, Bithell explains that nothing about the process was what he expected.

While you might imagine that the offer to work on such a massive IP would come out of meetings in a shiny central London office, Bithell reveals that he actually got to pitch his vision for John Wick with a pint in hand.

“ Weirdly, [John Wick Hex’s first meeting] was ultimately just two guys in the pub talking about what they’d do with the game… and somehow one thing led to another and er… I was making a John Wick game!”

A strategy that paid off

Unsurprisingly for a developer who made his name telling a heartfelt story about a group of shuffling blobs, Bithell’s vision for a John Wick game was anything but ordinary. While most people would probably envision a John Wick video game as something akin to 2003’s blocky PS2 third-person shooter Enter The Matrix, Hex instead transforms John Wick’s captivating carnage into something far more considered – a strategy game.

“I think it would be very easy to do a third-person shooter where everyone’s in suits with neon lights around them. But that’s not going to capture any of what makes these movies special, it’s going to make something that feels generic. I was expecting more of a fight to do the creative thing, but actually Lionsgate, Good Shepherd… everyone from the start was just very into the idea of doing something different — something that’s truer to the movies.”

“I think of my inspirations –I love the Batman Arkham games, I love what Goldeneye did, games that actively originated things and tried to innovate using a film as a jumping-in point, or in Batman’s case a comic, going ‘Okay, let’s make a game that can only exist because of this IP, and how do we translate that smartly rather than sticking an IP on an existing game and calling it a day?’”

Like Bloober team before him, Bithell also expresses surprise at just how collaborative the whole process actually was.

Learning how to Wick

“We got lots of access. We got to train with [Lionsgate’s] martial artists and firearms experts, I had some conversations with Chad the film’s director — whose been really great. Chad’s been really good at looking at the game with me and working through how we can tie it to his world better. There’s lot of people behind-the-scenes have been involved, and that’s given us some connective tissue.”

Despite game developers and movie studios normally working in almost complete separation, Lionsgate wanted to give its development partners the same resources it would its own people — and it seems that the studio was just as keen to get involved with John Wick Hex as Bithell was.

“It’s been incredibly cool to have those people in the room. It sounds a bit lame, but it does feel like we’ve inherited a family. We have access to all these smart folks who’ve frankly been doing this for a while and know this world and know these characters.”

Despite his fears that the core team behind the films would push for a more traditional action game, Bithell reveals that Wick’s creators were on board with the turn-based combat from day one.

“When we were talking to the studio and to the creative team behind the movies, they all just got it. They all just went ‘Oh, this is a movie where you think like John Wick’ —  because they’ve dedicated several years of their careers to figuring out how John Wick thinks. The studio, the publisher, everyone seemed to be into doing something that really explored what that fight choreography was.”

While this level of support and passion for a small-scale game from a massive film studio might seem surprising, for Bithell, Lionsgate and Good Sheperd taking these kinds of risks isn’t just a clever move – it’s one that’s true to the studio’s philosophy.

“If you look at the films Lionsgate has made, they very much do take the weird bets, like John Wick itself, but lots of other IP they’ve worked on over the years. I think it’s baked into their DNA. I think for me, and I think for them as well, an IP is an opportunity to do something interesting. You can absolutely just cash in on that, that’s fine, but I think you can actually do much more by looking at something like John Wick and going ‘Okay, what can this bring to games that we’ve not done in another game?”

It helps, that according to Bithell, most of the people at Lionsgate are ‘nerds’. Having also recently invested in their own Overwatch team and dabbled with licensing their IP for in-game collaborations with existing games like Fortnite and Payday, much like Warner Brothers and Annapurna before them, Lionsgate is clearly a film studio that’s taking gaming seriously.

While of course there is serious money to be made here, for Bithell there was only one thing that truly mattered about his time working with Lionsgate: “I think everyone involved at Lionsgate and Good Shepherd wanted to make a good game, and ultimately — that trumps everything.”