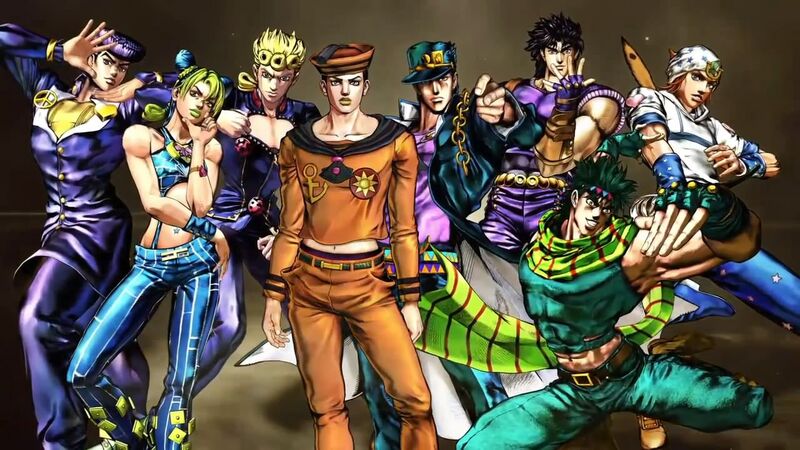 JoJo’s Bizarre Adventure is one of the most influential and celebrated anime and manga ever created. The long-running masterpiece features stunning artwork, memorable characters, and tense battles between characters with unique abilities called Stands. The series also contains many beautiful men and women wearing elaborate outfits while voguing threateningly at each other. While these elements are off-putting to some, the posing and high fashion are a massive part of the series’ bizarre charm.

The character designs in JoJo’s Bizarre Adventure are fantastically over the top, and they’re becoming more and more daring as the franchise continues. Many of these characters would look more at home on a runway than in a supernatural brawl. Author Hirohiko Araki gives each of these characters a big enough personality to fill their loud outfits, as well. These are the eight fiercest fashionistas in JoJo’s Bizarre Adventure, and they’re all as bizarre as they are beautiful.

DIO’s final outfit in JoJo’s Bizarre Adventure: Phantom Blood is nothing to write home about. While the royal purple coloring does denote his desire for wealth and nobility, it’s pretty bland and just makes him look like a generic Victorian vampire. However, his Stardust Crusaders’ outfit leans way into the smoldering sexuality common in vampire fiction and highlights the character’s best features.

DIO’s part three outfit consists of a black unitard, an open orange jacket ending at his midriff, orange crotchless pants, and a heart-shaped headband with a matching belt and knee pads. The boldness of this ensemble furthers the raw confidence and power DIO radiates. This immortal vampire believes with every fiber of his being that he is the strongest, smartest, and most capable entity in the world and that it is his right to rule over humanity.

While this outfit may not be the most intimidating in a vacuum, the way DIO carries himself in it makes it look downright terrifying. As other characters are fighting for their lives, DIO is sashaying around like he’s on his way to a themed night at a club. Yes, this outfit is bizarre, but it also conveys how above everyone else he thinks he is. DIO doesn’t care what anyone thinks of him, and his bombastic clothes are proof of that.

Pannacotta Fugo’s outfit doesn’t make much sense, even if it does capture his inner turmoil. His suit jacket and pants feature several holes, and he’s shirtless underneath his single-button jacket. Fugo completes this look with a dark blue tie with a strawberry print and a matching belt. While eye-catching, his clothes are utterly devoid of any practicality, and it must be borderline impossible for him to get dressed without accidentally sticking his hand or foot into the wrong hole.

However, like any teenager with a sense of style, his ensemble conveys his tortured soul. Fugo is a frighteningly smart young man, but his temper and hatred of authority keep him from living up to his full potential. His temperament even affects his friends, as his Stand, Purple Haze, nearly harms his friends each time it’s summoned. Fugo’s torn-up outfit perfectly represents the conflict between the calmer and more violent parts of his personality, with the exposed skin symbolizing how vulnerable he feels whenever this weakness hurts those closest to him.

Diavolo is an unusual man with a look that’s as striking as it is lacy. His pink, leopard print hair runs down the back of his intricate body stocking — which seems to hold up his saggy purple pants. For such a reclusive man, his fashion sense is surprisingly bold and eye-catching. Considering that the majority of JoJo’s Bizarre Adventure: Vento Aureo focuses on hunting down this hidden villain, it makes sense that he’d have such a grandiose outfit for his eventual introduction.

The outfit is really busy and complicated, but not unappealing. Diavolo’s arm tattoos blend with his body stocking to create a fluid look, and it’s hard to imagine Diavolo wearing anything else for very long. Just look at how well his pants and tattoos match his hair. He clearly planned on rocking this look for a while.

Best of all, Diavolo’s look perfectly complements his Stand’s. King Crimson’s light pink body has white crisscrosses that make the Stand user’s attire seem even darker. Together, this color scheme helps King Crimson stand out on the page, casting the evil Diavolo in an even darker hue.

Jolyne Cujoh, Jotaro Kujo’s somewhat estranged daughter, has a fierce look that’s delightfully punk. Her black top has a spider web pattern that connects to her skirt or pants, which also feature the same graphic. The heart accessory on her chest continues the trend of hearts appearing on JoJo’s protagonists, and her lime green belt matches the green hair framing her face. The look screams youth in revolt and perfectly fits the themes present in Stone Ocean.

JoJo’s Bizarre Adventure: Stone Ocean is all about rebellion against oppressive systems in society. Jolyne must escape from a prison after being imprisoned for a crime she didn’t commit. She also has to navigate the unusual relationships she has with her friends and father in these less-than-ideal circumstances. Her daring outfit shows how little she cares about the rules of society and hints at her Stand’s ability to transform her into threads. For Jolyne, it’s all about wearing what she thinks is cool. What others think about her fashion sense is irrelevant.

Simple but sharp, Weather Report’s outfit features a black jumpsuit with white fur trim that matches his tall fur hat and a top with symmetrical holes across his torso. His gold crotch plate and shin braces also hint at his relationship to this installment’s antagonist, Enrico Pucci. On top of its slick design, Weather Reports outfit is also one of the most practical in the entire series.

Weather Report’s Stand — also called Weather Report — allows him to control the weather and create any meteorological phenomenon. Since he can manipulate temperature and weather conditions whenever he wants, it’s actually a good idea for his attire to fit multiple climates. The holes in his shirt make it more breathable when its warm, and his insulated hat shields his head from the rain and cold winds he creates. Yes, his outfit is certainly strange, but it’s also a useful one that allows him to make the most of his incredible abilities.

Narciso Anasui’s attire is odd, frustrating, and leaves little to the imagination. His shirt leaves large patches of his chest exposed and connects to a studded leather back with hot pink shoe prints traveling from his waist up to his chin. He completes this look with a studded flat cap, a short skirt, and a large white belt that matches his thigh-high boots that also taper off into a mesh pattern. If we didn’t know any better, we’d say Anasui got dressed in the dark while juggling razor blades — and forgot to put on a jacket or overshirt before heading out for the day.

No one would actually wear these clothes in real life, and Anasui is often the first character fans of JoJo’s point to when describing the series’ outlandish character designs. This look is flashy, without much substance, and doesn’t tie into his lovestruck and explosive personality. There are definitely a lot worse character designs in manga and anime, but Anasui’s outfit is easily one of the weirdest in JoJo’s Bizarre Adventure and perhaps the entire anime and manga mediums. But that’s fashion for you.

The most recent JoJo — Josuke Higashikata from JoJolion — has a charmingly simple look that perfectly suits his dramatic, quirky character. Josuke rocks a white sailor suit modified to show just a hint of his midriff, a dixie-cup cap, and pins of an anchor, sun, and heart on his chest and sleeve. The outfit’s tight fit and straightforward design accentuate Josuke’s many exceptional poses. It’s clear that Araki loves to draw this protagonist in all manner of picturesque positions.

Plenty of characters in JoJo’s Bizarre Adventure wear personalized uniforms, but Josuke’s attitude in the outfit is what makes him one of the fiercest fashionistas in the series. This goofball is having an absolute blast as he goes on his strange journey to recover his memories after waking up in a pile of dirt without knowing anything about his past, including his name. This JoJo is one of the most expressive in the series, and his genuine enthusiasm to learn more about himself and the world around him furthers his charming and versatile design. Josuke’s the perfect model. He has as much fun striking a pose as we do watching him.

This villain isn’t the biggest or badest, but he’s one of the best-looking antagonists in JoJo’s. Yotsuyu Yagiyama wears a dark green leather top and leggings with sharp studs inspired by his Stand, I Am a Rock. Over the baddy’s sharp (literally!) clothing, the villain wears a tan crop top and khaki shorts with a floral print. The androgynous villain’s outfit is nearly the exact opposite color palette of his Stand but clearly goes for the same aesthetic, serving to further strengthen the connection between the two.

Yagiyama’s outlandish outfit is made all the more interesting considering the villain’s motivations. This villain is a rock human, a race of creatures that are made of stone and kill people and then take their place in society. As a body snatcher, you’d think Yagiyama would want to blend in as much as possible and not draw any unnecessary attention to himself. However, this fashionista’s desire for fame and a high social status compels him to dress in a way that will engrain himself everyone’s memories forever.