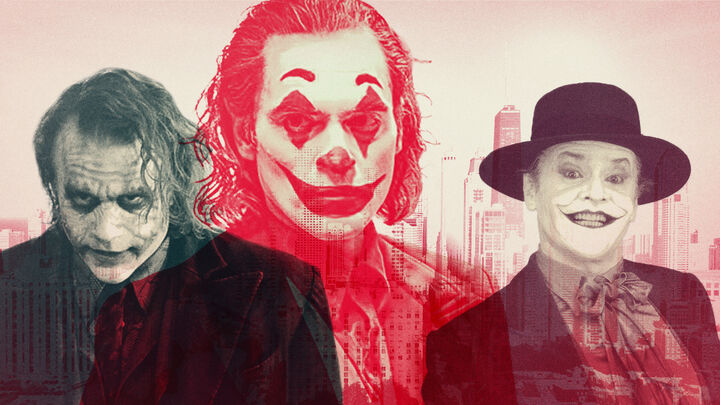 The Joker in Live-Action: The Many Faces of The Clown Prince of Crime

What the role of Hamlet or King Lear was for thespians of yesteryear, the Joker has become for artists of the modern era. Everyone’s out to put their own spin on the Clown Prince of Crime, with most performances garnering praise – and in one case so far, an Academy Award.

But Heath Ledger’s creepy and cryptic crawl around inside the mind of Joker might not be the only award-winning take on Batman’s greatest foe. With all the critical buzz surrounding Todd Phillips’ Joker, particularly praising Joaquin Phoenix’s performance as the criminally insane comedian, it certainly looks like we might see some greasepaint at the Academy Awards next year.

Created by Bob Kane and Bill Finger for the debut issue of Batman in 1940, the Joker has been at the top of the supervillain game for 80 years, and our fierce fascination with madness probably means we’ll be seeing the character at the multiplex for decades more.

Let’s take a stroll down the midway and check out all the notable live-action Jokers there have been in TV and movies. Note that these are featured Joker roles and not quick cameos like we’ve seen on TV shows like Birds of Prey, Powerless, and Titans.

Iconic singer, dancer, and actor Cesar Romero landed what many at the time considered to be a buffoonish off-kilter role for the “Latin lover” of the big screen: a bank robbing clown on the 1960’s Batman TV series. The general public wasn’t overly familiar with Joker at this point, so it would be Romero’s giggling, goofy performance that would put Joker on the map and create many fans’ first impressions of the villain.

Romero’s Joker, who appeared in 22 episodes of the series (and the movie released during its run), was a lighter, more mischievous iteration of the character – a mirthful agent of chaos that more mirrored  the comics at the time. He was menacing, but not murderous. The most twisted element here was the fact that Romero refused to shave his famous mustache, so you could always easily see it underneath his white face paint.

The comics took Batman to dark and foreboding places in the ‘80s, and director Tim Burton followed suit, with his glowering, gothic big screen Batman in 1989. Megastar Jack Nicholson was not only tapped to play the Joker, but he stole the show right out from under the Caped Crusader.

Of course, it helped that Joker had more screen time, and that the film itself was basically a Joker origin movie, but also Nicholson’s jovial japes acted as a crucial counterpoint to Michael Keaton’s terse, shadowy Batman. Jack’s Joker loved a good laugh (and a good Batdance) and was all about turning each moment into an excuse for a crazed cackle. He had the preening prankster elements of Romero while actually leaving charred and disfigured bodies in his wake.

We asked FANDOM’s Bat-community about their favorite live-action Jokers, and while Heath Ledger won the vote with 75%, there was still a lot of love for ol’ Jack. “Ledger is good, probably even better, but Nicholson will always be my favorite.” wrote Leostales.

X-MEN 55 added “Jack Nicholson was a more accurate portrayal to the source material than anyone else in my opinion. I wish he could have played Joker more than once.”

More than a decade would pass before someone took another big psycho stab at the Joker. This time, the results would absolutely floor fans worldwide. Actor Heath Ledger took his mind and body to some truly warped places in order to dig into the darkness of an enigmatic anarchist who targets Batman in Christopher Nolan’s The Dark Knight.

“My ultimate favorite would have to be Heath Ledger’s take in The Dark Knight,” Skelemoons wrote. “I can’t imagine that part played by any other actor. I mean, he literally locked himself in a motel room for forty-three days, isolated and alone with his thoughts, to perfect the crazed Joker we all saw on screen.”

Ledger’s ghoulish Glasgow-smile Joker, who just wanted to “watch the world burn,” was convinced that anyone faced with extreme circumstances could become a killer – and that the only true balance was disorder. While Bruce Wayne was looking for someone to take up his mantle, on the public front, Joker was out to prove that even the best people could be broken down and transformed into degenerates. It was a riveting ride that earned the late Ledger a posthumous Oscar for Best Supporting Actor – and set a brutal benchmark for all Joker performances to come.

“Heath ledger his psychotic nihilistic portrayal was amazing,” wrote SCIFIGUY89, “showing the crazy joker did things for no other reason than anarchy and to mess things up.”

Mc dark knight 2013 agreed, noting that Joker’s mystery added to the terror. “We don’t know who he was or what motivates him. He just appeared one day and I like that element of the Joker. Also, he has a great portrayal of the relationship between him and Batman.”

Truthfully, under other circumstances, the news that Jared Leto, who’d already win an Oscar, was playing the Joker world have been met with more fanfare. But he not only was he the first big actor to follow Ledger’s beloved performance, and not only was the entire DCEU being met with mixed reactions at the time, his Joker was ultimately a very small part of 2016’s Suicide Squad, a movie that already had a sprawling ensemble – and its own scene-stealer in the form of Margot Robbie’s Harley Quinn.

Like Ledger, Leto is a very involved method actor, willing to go to huge lengths to inhabit the mind and skin of the role he’s playing. Doing this likely won’t make many friends on set (there were reports of Leto, who never broke character, aggravating other cast members), but the results can be pretty spectacular. Unfortunately, a lot of Leto’s ornate, tattooed crime lord wound up on the cutting room floor. And what did remain wasn’t enough to make a lasting impression.

For years, the producers of FOX’s Gotham, who weren’t allowed to use the actual costumed characters of Batman and Joker (or have any character say those names), insisted that Cameron Monaghan’s twisted thug Jerome Valeska (above) was NOT the Joker – but instead a crazy criminal who existed long before Joker and probably inspired, at some point, the real Joker. Got that?

Well, by the end of the series, after five seasons, Monaghan was pretty much playing the Joker. To much acclaim, mind you. Monaghan was the first actor since Ledger to be lauded for his Joker (or “Joker”), infusing Jerome with a sinister spark that fans truly loved.

LJ8533 stated that Heath Ledger was the best, but also that “I actually really enjoyed both of Cameron’s portrayals on Gotham.”

Later on the series, it was revealed that Jerome had a twin brother named Jeremiah. Jerome perished, at the hands of young Bruce Wayne, and Jeremiah was driven insane by toxic gas left behind by his brother. Following so far?

Now Jeremiah (above) was “Joker,” even if they didn’t say that name. But a different shade of Joker. Whereas Jerome was chaotic evil, Jeremiah was more reserved. A suave, restrained sort of psycho. So Monaghan got to explore that side of Joker as well.

By the finale, after a 10-year time jump, Jeremiah (who was now disfigured thanks to a very Burton-esque plunge into a vat of chemicals) emerged from Arkham Asylum as “J.” It’s a needlessly complicated journey, sure, but Monaghan remained one of the brightest parts of the series for years. Because of his stunning performance, they kept bringing him back and changing the entire path of his character(s).

“Monaghan is so underrated!,” writes Kiwimints. “He pulls off not one, but TWO separate performances of joker/proto-joker and has sent multiple chills down my spine throughout the series!”

“Ledger was the best Monaghan is definitely a close 2nd,” added BeauJhetteaux.

Already swarmed and surrounded by a cloud of Best Actor buzz, Joaquin Phoenix (yet another method actor) is our new Joker – this time in a standalone Joker origin film that takes a crushing look at the nasty nihilistic nogoodnik’s descent into a life of crime.

Phoenix’s Arthur Fleck, a character not based on anyone from the comics (since Joker’s backstory is ultimately scattershot at best and always unconfirmed), is a struggling stand-up comedian tasked with caring for his ill mother while also dealing with his own emotional and mental imbalance.

Based on all the advance hype surrounding Phoenix’s portrayal, and the Joker movie itself, it’ll be interesting to see how high he’ll score on a future poll about our favorite live-action Jokers. Ledger’s a tough one to beat, but Phoenix may rise to the occasion.

“Who’s your favorite live-action version of the Joker so far” poll results at the time this article went live: