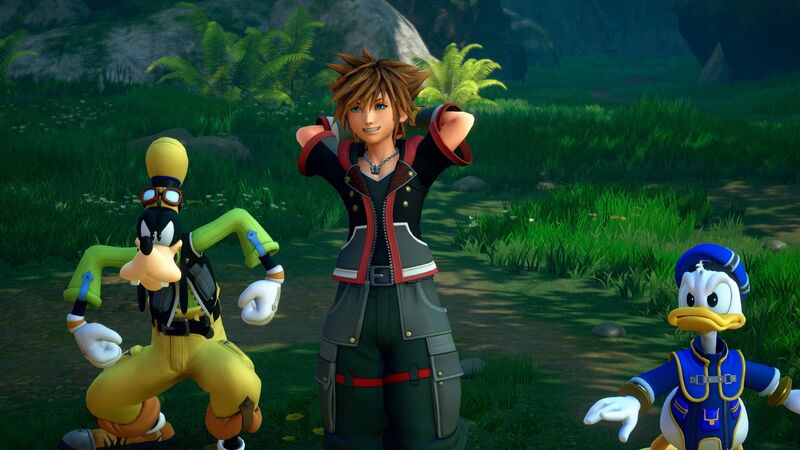 “Apparently, everyone knows everyone and this is an insane amount to get memorized.” That’s my favourite line of dialogue in Kingdom Hearts 3. Why? Because it so perfectly encapsulates the despair of many trying to wrap their heads around the story of a series that has swollen and expanded over the course of twelve games – something that has birthed lengthy articles on the subject or 40-minute attempts at plot explanations on YouTube. And now, after a thirteen-year wait, Kingdom Hearts 3 has the frightful job of offering a conclusion to all those years of piled-up story.

In part, it’s a shame that this convoluted mess of time-travelling bad guys with slightly different names and allies with near identical faces, some of which are possessed by those same bad guys, is what’s become the infamous joke that defines the series. Somewhere within all that shadowy and tangled mass, though, is a gentle and heartfelt story about friendship, mixed with some exciting and wondrous action-RPGs that allow us to venture through some of our favourite Disney worlds.

PART OF YOUR WORLD

In that regard, Kingdom Hearts 3 is no different. Yes, it does still dwell on the mistakes of its past, with some infuriating storytelling decisions that add complexity and aloofness for no discernible reason. For the latest entry, in particular, the pacing is the game’s biggest issue though.

Picking up immediately after the events of Dream Drop Distance, Sora must now journey between worlds with Donald and Goofy in order to restore the powers he lost since he was consumed by darkness and failed to become a Keyblade Master. Meanwhile, other characters are working towards the more overarching threat of Master Xehanort and his attempts to flood the world in darkness. Don’t worry, that’s as deep as we’re diving down that wormhole today.

Still, that split in the story creates a strange problem: one that sees you – for the first two-thirds of the game at least – simply gallivanting around various Disney worlds getting up to all sorts of mischief. Nothing of major story significance really happens, aside from the odd appearance of an evil Organization XIII member and their ludicrous haircut. Instead, those story developments occur away from Sora in cutscenes or conversations.

That’s not to say there’s no value in the largest chunk of the game. Returning to Olympus to battle alongside Hercules or to the Caribbean to sail the seas with Jack Sparrow once more is the exact sort of fan service that made Kingdom Hearts such an appealing prospect in the first place.

The new worlds only add to that too, with highlights including a sunny jaunt through the Kingdom of Corona from Tangled and a chilly Arendelle from Frozen – repeat performance of ‘Let it Go’ included for the umpteenth time as well. Many locations have unique mechanics or sections that add some enjoyable diversity to the adventure too, including mech battles and, er, a massive dance party.

Some of the worlds fair far better than the others, though. Where Kingdom Hearts has truly enabled the Disney fantasy in the past is by opening up these fantastical spaces for exploration and discovery alongside famous faces. However, some are far more restrictive here, setting you on a dull story path that bounces you between walking, cinematic and combat with no room for freedom. Monstropolis and San Fransokyo we’re looking at you, here.

Fortunately, when it comes to combat, Kingdom Hearts 3 is absolutely a series best. The dizzying and frenetic skirmishes of the second mainline entry have reached their full potential here, as Sora backflips, frontflips, glides and dashes across the battlefield. Keyblades are now further expanded too, with each one you acquire from the Disney worlds transforming to have their own themed attacks and special abilities that light up the entire screen.

It’s an impressive and satisfying visual feast, a glorious button-mashing display of keyblade swinging and magic flinging, plus a wild array of special attacks that incorporate everything from your closest Disney pals to Disneyland theme park rides. Some can make things a little too easy for series veterans but, honestly, nothing feels quite so satisfying or wonderfully bizarre as battering a giant boss with a neon-coated teacup.

It’s indicative of a game that’s full of silly but charming touches. Elsewhere, you can become a master chef with Remy the Rat, noshing on the delicious meals you’ve cooked prior to combat to grant bonuses. Or you can take a break and play some classic Game & Watch style mini-games featuring Sora and Mickey, while many worlds have other fun side-activities you can busy yourself with as well.

There’s also the return of Gummi Ships as a means to travel between worlds with some light (if wholly uninspiring) arcade space shooter battles. Some players will find some fun digging into the Lego-style ship creation tools (you can put a handsome little Shiba Inu pup on the top of your ship, which is the best thing) or zooming around open space for a bit, but for the most part you’ll probably just want to get these shooty asides out of the way and get back to the meat of the game.

IS KINGDOM HEARTS 3 ANY GOOD?

Yet, what it all comes back to is that ending. How does Kingdom Hearts 3 wrap up the series? Well, it does so in some fashion, on an impossibly grand scale that only this series could hope to achieve. When the final third kicks in it’s a relentless assault on your thumbs and your emotions. Fans who have stuck with this series for a significant part of their lives will find a worthy conclusion that touches on each character equally and offers some satisfying closure.

In these final moments, all that overarching story guff falls by the wayside. Oh, sure, it’s all still totally dumb that you’re fighting multiple copies of the same person that span different timelines and different states of living, but ain’t it great to see the whole gang fighting together at last? Their friendships have carried the series this far, so it’s the rightfully fitting connection for it to conclude on too.