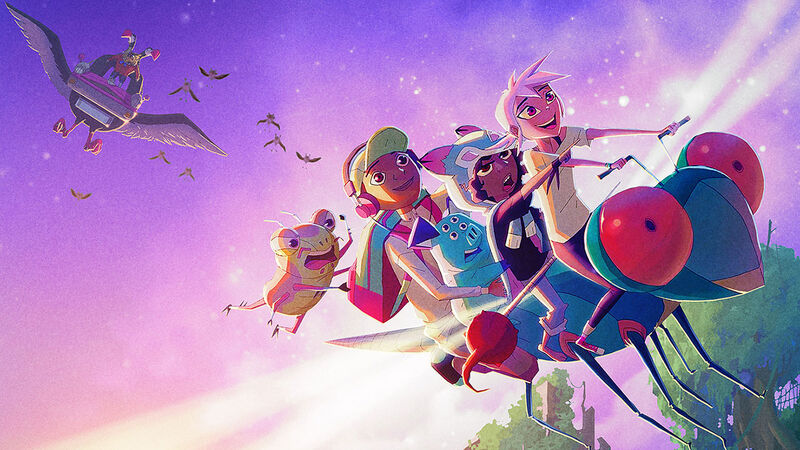 Now streaming on Netflix, DreamWorks Animation’s new animated series Kipo and the Age of Wonderbeasts follows a young girl named Kipo (voiced by The Boys and She-Ra and the Princesses of Power’s Karen Fukuhara) as she explores a bold and beautiful dystopia, set hundreds of years after a mysterious cataclysm drove humankind down into subterranean cities.

Based on the webcomic by Radford Sechrist, Kipo searches for her father and friends while teaming with a loner named Wolf (Sydney Mikayla), encountering the new world’s curious and crafty mutations – from lumberjack-styled cats to giant bunnies the size of a building to a nefarious Mandrill voiced by Dan Stevens (Beauty and the Beast, Legion).

With the series debuting this week, Fandom spoke to Sechrist and executive producer Bill Wolkoff about the ideas behind this dazzling realm, the surreal landscapes, the awesome animals, and the music.

Expanding on the Webcomic

Sechrist notes that when he was creating his comic, “it was very small,” as he was more focused on the relationship between Kipo and Wolf than he was with full world-building. “As soon as I started working with Bill, we knew we had to explode into a bigger narrative. So he took this kernel and ran with it.”

“I loved Rad’s artwork,” Wolkoff said. “I’d never seen anything like it before. I loved the playful sense of it. And I really loved the character of Kipo and the world she’s thrust into. There was real potential there to expand it out into a series. Part of that was giving it a little bit of a quest element without sacrificing this great character relationship between Kipo and Wolf, who are our odd couple of the apocalypse. And it’s more than them just being an odd pairing, we see these two people from very different worlds, with very different and posing attitudes, become sisters in a way.”

He added, “What’s so powerful about the comic is that it’s about the end of the world but it has this relentlessly positive character who can see the wonder in this new world that others can’t.”

Just because the story got bigger though, didn’t mean that all of a sudden we’d get an explanation as to how the world got to be the way it was. “I kind of didn’t care about narration or exposition or why things were the way they were,” Sechrist explained. “I just cared about these characters. And also, if they didn’t know what happened then I didn’t want the audience to know. It was more fun to have everyone only know what the characters know.”

Why set the story 200 years in the future though? “Well, we needed enough time where certain cultures could develop,” Sechrist said. “Like, if you were a Timbercat or if you were part of another creature group, you have a history”

“Also,” Wolkoff added, “setting it hundreds of years ahead not only let cultures develop but it allowed those of us who worked as artists on the show really use our creative juices while imagining how things would have changed.”

Along her journey, Kipo meets all sorts of mutated flora and fauna – some of which can now speak and think like humans. Though there weren’t any formal rules regarding what kind of animals still remained or how they mutated, Sechrist notes there were some common themes.

“I think typically anything that wound up about human size could talk,” he explained.  “Anything that was giant was not able to speak and was more animal-like. And the only exception was if something was extraordinarily small, like a flea, then that might be the size of a horse now, but still acting like an animal.”

“And we did this other thing were if something wasn’t going to talk or have human-like intelligence then we’d enhance them in some particular way. Like, give them extra eyes or extra legs, to differentiate them from the creatures who could talk.”

One of the (literally) biggest elements of this world are the Mega-Mutes, which are giant-size animals that disrupt everything around then due to their sheer mass. Like a Mega Bunny that Kipo has more than one run-in with. “I was always a big fan of Totoro and the Miyazaki stuff,” Sechrist said. “I love the Catbus. It’s adorable. So for the giant bunny monster, I like the part where it’s adorable but then the ears going down the back make it seem like Godzilla.”

Kipo crosses paths with scientist wolves, lumberjack cats, heavy metal snakes, and all sorts of bizarre beasts, but the first thing she sees when she lands on the surface are a couple of bees listening to EDM. “I think the operating principle behind those bees — and this is something Rad and I talked about from the very beginning — and what’s so great about them being the first thing that Kipo discovers is that it shows how everything in this world is not going to be the way you expect it,” remarked Wolkoff. “Everything is upside-down and there’s a real absurdity to it. We’ve often talked about how his show is like The Walking Dead meets Alice in Wonderland. And with the Alice in Wonderland ‘do six impossible things before breakfast’ attitude. There are things that are absurd but also grounded in rules and reality that we talked a lot about to make sure it was authentic.”

When it came to conjuring up these creatures, Sechrist’s early inspirations came from just walking around L.A. “I’d bring my camera and explore Los Feliz,” he said “and I’d take a snapshot of the Shakespeare Bridge or just a cool house and then I’d do a drawing of it with overgrown plant life based on what I was seeing. But then also like going into Intelligentsia Coffee and seeing the baristas dress like lumberjacks. That’s where the Timbercats came from. I’m like, ‘Oh, hipsters!’”

Not only did Sechrist’s original webcomic not have a quest-like story, but it also lacked a main villain – which was something both Sechrist and Wolkoff knew they’d need for an animated series.

“Since the show is very much about how the way things are now versus the way they were in the past,” Wolkoff said, “it made sense that the villain should hold a grudge against humans for the way they used to treat animals before everything changed. And then we just went to town when coming up with Scarlemagne.”

“Mandrills are fascinating creatures,” he added. “They’re visually stunning. I love puns, hence the name. So we had this vision for him when we went out to Dan Stevens for the part. We showed him what he looked like and how he fit into the larger world and Dan Stevens gave a thumbs up and said “When do we start?” And we knew we wanted the character to hold a grudge but to still have absurd and fantastical elements to him so we came up with this ‘Tom Holtz from Amadeus meets The Joker’ idea and Dan used that as a springboard to take the character in the direction where he took it. We made Scarlemagne to be fun, emotional, and very scary. We wanted to tick off all of those things.”

Kipo and the Age of Wonderbeasts is now streaming on Netflix.

You can see more about the series at the official Kipo and the Age of the Wonderbeasts Wiki at Fandom.