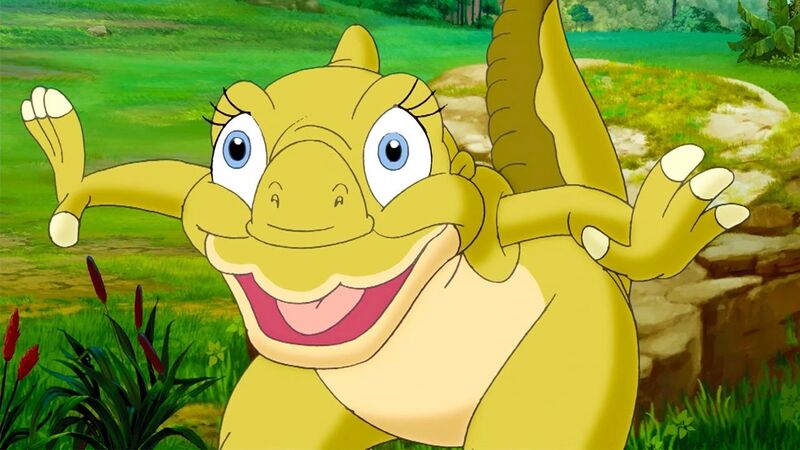 ‘The Land Before Time’ at 30: Disney Disillusionment Led To a Stone-Cold Classic

In an era when Disney is committed to revisiting its animated classics and reworking them as live-action features (The Jungle Book, Beauty and the Beast, and, due next summer, The Lion King), it’s interesting to consider the legacy of the hand-drawn, 1988 classic The Land Before Time. The film — a beautiful, if surprisingly bleak picture about five orphaned juvenile dinosaurs, fleeing famine and a relentlessly pushy Tyrannosaurus Rex — turns 30 this week.

Not a Disney film, but a film whose production story exists almost entirely within the shadow of The House Of Mouse, The Land Before Time is directed and produced by Don Bluth, a man who has spent his entire career championing the merits of hand-drawn, traditional 2D animation. In fact, during the 1980s and 1990s, Bluth – admittedly, sometimes backed by Steven Spielberg – was more often than not Disney’s most serious competitor. Certainly, Disney’s most vocal critic.

Born in El Paso, Texas on September 13th, 1937, Bluth was obsessed with Disney from as early as he could remember. As a child, he’d ride his horse to the local movie theatre, watch Disney films, then go home and draw what he’d seen. In 1955, he got a job at Disney itself, as an assistant to the great John Lounsbery, one of Walt’s legendary Nine Old Men. He did a bit of work on Sleeping Beauty (1959) and The Sword In The Stone (1963). Then, in 1957, he left, subsequently spending two and a half years on a mission in Argentina for The Church Of Jesus Christ Of Latter Day Saints. Bluth’s great-grandfather had been Helaman Pratt, an early leader of the church.

Bluth returned to Disney full-time in 1971, five years after Walt’s death. He found a company in financial and creative turmoil.

“I think the later Disney films have turned animated movies into babysitters,” he said in later years. “They’re films you drop your kids off to see while you go shopping.”

Bluth believed that Disney’s creative process had become repetitive, claiming, “We felt like we were animating the same picture over and over again with just the faces changed a little.” He professed anger and frustration that, in his mind, Disney had never bettered Snow White and the Seven Dwarfs, the company’s first full-length animated picture, released in 1937.

Appealing to the Adult Brain

And so, in 1979, on his 42nd birthday, midway through work on The Fox and the Hound (1981), Bluth handed in his resignation at Disney. Thirteen of his co-workers followed suit. They retreated to Bluth’s garage studio, with a view to making the sort of animated pictures they wanted to see.

“We’re interested in trying to re-establish animation as an art form,” said Bluth, “creating subject matter which will appeal to the adult brain.”

This meant the ‘Don’t Walk Away‘ sequence in the 1980 Olivia Newton-John romantic fantasy movie Xanadu. It meant the brilliant dark fantasy of 1982’s The Secret Of NIMH (which suffered hugely from being released at the same time as Spielberg’s ET: The Extra-Terrestrial). And, really only for the money, it meant the playable-cartoon-cum-videogames Dragon’s Lair and Space Ace (both 1983).

Despite The Secret Of NIMH almost bankrupting Bluth and his partners (and former Disney employees), Gary Goldman and John Pomeroy (the trio had all remortgaged their houses to fund a film which had, in the end, only just broken even), it had found a fan in the aforementioned Spielberg. A committed champion of animation – “With animation, fantasy is your friend,” the ET director once said – Spielberg wanted to make cartoons, and in Bluth and co, he’d found just the men he wanted to make them with. What followed was An American Tail (1986), the first animated feature to out-gross a Disney animated feature, and for a while, the highest grossing animated film of all time. Then came The Land Before Time.

The Land Before Time is 69 minutes of everything Don Bluth ever loved about traditional animation. Its use of colour is, even now, an artistic marvel, the way the troupe of dinosaurs’ skin lightens and darkens depending on how exposed they are to the glare of the light. The music, scored by the late James Horner, is as bold as and fantastical as you’d want a prehistoric odyssey to be, while its depiction of mortality is skewed adult-ward, resting at around about the place that’s useful for a child to understand. Holding it all together is the grizzled narration of the great Pat Hingle; often moralistic, always evocative. It’s a film better than anything Disney released in this era, prior to the renaissance kickstarted by The Little Mermaid in 1991.

The Land Before Time is a film infused with tragedy. Judith Barsi, who recorded the voice of the fledgling Saurolophus, Ducky, was dead by the time the film came out, killed after years of abuse by her father József in a murder-suicide, alongside her mother Maria Virovacz, on July 25, 1988. Her last film, All Dogs Go To Heaven (“She was absolutely astonishing,” said Bluth, directing again. “She understood verbal direction, even for the most sophisticated situations.”) was dedicated to her memory.

Things never got better for Bluth than The Land Before Time. Feeling his creativity was being neutered by Spielberg (and on The Land Before Time, Spielberg’s partner, George Lucas), their relationship ended when the film was completed. Bluth’s next film, the aforementioned All Dogs Go To Heaven, was released on the same day as The Little Mermaid, and thereafter anything Bluth made was largely lost in the crowd, despite a slight resurgence in 1997 with an adaptation of the life of Grand Duchess Anastasia Nikolaevna of Russia, Anastasia.

Despite no involvement from Bluth, Spielberg or Lucas on any of the films that followed, The Land Before Time franchised out, spawning fourteen videogames, a 2007 TV series, and, quite remarkably, 13 (THIRTEEN) sequels — the last of which, Journey Of The Brave, was released as recently as 2016. Candace Hutson, who voiced the stroppy Triceratops, Cera, in the original movie, is the only link with the musical adaptations that followed, lasting three subsequent movies, leaving before 1997’s The Mysterious Island.

Don Bluth lives in Scottsdale, Arizona. He still works from time to time. A Scissor Sisters promo here (2004’s “Mary”), a book there (2005’s The Art Of Animation Drawing), in 2012 he opened the Don Bluth Front Row Theatre in town.

He remains, as he has been throughout all his life, a fan of traditional animation.

US viewers can watch the first ten The Land Before Time films via HBO Go from December.