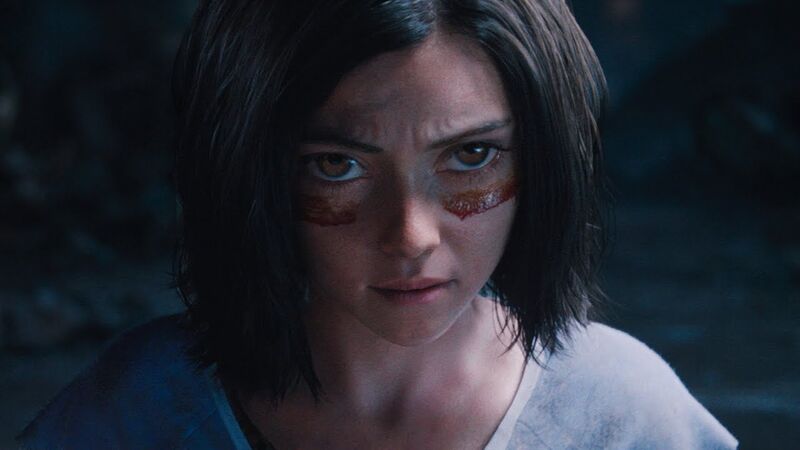 Alita: Battle Angel, the live-action adaptation of Yukito Kishiro’s cyberpunk action manga Gunnm (known as Battle Angel Alita in the West), hits U.S. theaters this December. The Hollywood film hopes to achieve something no other adaptation has: box office success. FANDOM got the chance to sit down with Alita‘s producer, Jon Landau; writer/director, Robert Rodriguez; and Alita herself, Rosa Salazar, at Crunchyroll Expo to discuss the difficulties the filmmakers have faced, the importance of diversity in Alita: Battle Angel, and the possibility of a sequel.

The Problem With Hollywood Adaptations

Lately, the words “live-action adaptation” are often met with eye-rolls or outright scorn, and it’s not just anime fans who are skeptical. A quick glance at the box office numbers or Rotten Tomatoes score of any recent adaptation, and it becomes clear that moviegoers, in general, dislike these films.

Take Dragonball Evolution or Death Note (2017), for example; online discussions of these films are full of fans and non-fans alike who disliked these adaptations. Poor acting, changing the source material, hokey special effects — it’s enough to keep anyone out of the theaters. The recent Ghost in the Shell adaptation infamously tried to break free of this curse by casting Scarlett Johansson as its star, Mokoto Kusanagi.

That’s right, a white woman played a Japanese character, and it went exactly as you might expect. Cries of whitewashing rang out before the film even hit theaters, where it subsequently tanked — despite Johansson’s supposed star appeal.

So, how does one go about creating an adaptation with just the right elements to satisfy everyone? Well, if you’re Jon Landau, you don’t focus on selling movies with a big name — but a big heart.

“I don’t want to take anything away from other movies, but [Alita: Battle Angel] is a movie that’s all about heart. It’s about creating a character that’s emotive, engaging — and that you feel something. Why? Because you see her feel something. You said you saw the trailer. There’s a shot in there where she cries. You can’t pick that moment out of any of those other films you are talking about.”

Landau might be on to something. The visually stunning Ghost in the Shell fell short in the story department, leaving many to feel something got lost in translation. Alita: Battle Angel, on the surface, appears to be on a similar path. The latest trailer dazzled us with stunning effect and action. However, Salazar, echoing Landau, insists it has more to offer, which is partially due to the film’s Latinx star and director.

“I mean, you have two Latinos behind the camera here,” Salazar beams. “You’re going to get a lot of emotion. You’re going to get that heart. I think the heart, the relationships, are built. It doesn’t take, you know, a whole movie necessarily to start to build a relationship. It’s just these relationships [in Alita], they form very organically, but they are there. It’s not like introduce a character, introduce this character, ‘why are we here?’ Explosion. There’s a real reason to care here.”

A Realistic Character in a Manga World

There’s also a real reason for fans to get excited. The latest trailer showed off a near-perfect recreation of the manga’s world, including a deep dive into the Scrapyard, where the story takes place, and a peek at the aerial city of Zalem (or Tiphares) from below. Clearly, Rodriguez and Landau have done their homework.

“I think we really looked at the movie as an opportunity to, for one of the first times ever, really bring a manga to life — and pay homage to the style of it, but incorporate it into a Hollywood cinematic world,” explains Landau.

To pull this off, they made the main character as realistic as possible. “Our biggest challenge really was the character of Alita and being able to push her far enough that it did pay that homage to the manga, but not make her unrelatable or not accessible,” says Landau. “ And I think that when … you get into [the film], you forget, and you just accept her in this world. And coming up with the design for that and the execution of that, that people forget [Alita is a CGI character], was the biggest challenge.

The combination of motion capture and CGI seemingly work well together in Alita: Battle Angel. So much so that Alita is the spitting image of Salazar, even with anime eyes. “I had a guy at a coffee shop recognize me from the trailer. I thought, ‘This is great. I will amass some fame, and then I’ll be unrecognizable.’ They’re making it so photoreal.”

Making Room at the Table for a Latinx Sci-Fi Lead

But maintaining Salazar’s appearance in Alita: Battle Angel does more than just result in a hyper-accurate depiction of the title character. It gives us something that Hollywood has sorely lacked: a badass Latinx sci-fi heroine.

Ellen Ripley, Sarah Connor, Princess Leia, these are usually the first names to come to mind when thinking of iconic sci-fi heroines. Salazar’s casting could change that by opening the door to new Latinx talent.

But this isn’t a case of diversity for diversity’s sake. Salazar explains: “I was lucky to be cast based purely on my performance. That was like talent recognizing talent and wanting to come together to collaborate. It wasn’t like a diversity hire, which is, it’s very different, that kind of hire. … I was lucky to get in the room.”

The star also hasn’t forgotten her upbringing, or how far she’s come. “I was really fortunate to be able to go on this journey, and I really do hope it changes things because I’m just a poor girl from D.C., and I don’t look like a lot of the heroines that I look up to. You mention Ellen Ripley and Sarah Connor, of course, and even Rose [from Titanic] — I didn’t look like that either. If anything, I was below the level with the rats and the jig dancing.

“But yeah, it feels amazing.”

The Impact of Representation

This year’s UCLA Hollywood Diversity Report put official numbers behind what we already knew: Latinx actors are underrepresented in Hollywood. Only 2.7% of roles in the top movies of 2016 were played by Latinx actors. Not only that, films with Latinx (or Black) leads are distributed in fewer international markets than other films. It’s why the success of films like Alita is crucial. However, despite this, Salazar remains hopeful that she’ll be a guiding light for others.

“I don’t feel the weight of [being a Latinx sci-fi lead],” Salazar says. “I feel the responsibility of it, and I feel like I really cut my teeth taking the right steps to build my craft and the right steps in my career. That is essentially what got me to this point, and to show that you can take those steps as a woman of any color and you can achieve that goal in this new world, it’s a beautiful thing. It’s a really beautiful thing.”

“And it is for us as well, you know,” Landau adds. “[F]or us to be able to introduce playing [Alita], a woman of color, that’s very exciting for us, not just for Rosa. But I think to show the world, especially in today’s day and age, I think it’s more important than ever to show that.”

There’s nothing quite like seeing someone who looks like you on the big screen, something that Salazar is also aware of: “[W]hen you hear the Latin youth go like, ‘Oh my god,’ to just feel how excited everyone is, that’s just, what a gift. That’s just beautiful. Yeah, I feel very proud. I feel like I am ready to take on that responsibility. Totally, I want to see that. I was rushing the gate.

Alita: Battle Angel’s star and director, along with its South American setting, means that we might actually get a rich (perhaps multilingual) adaptation that accurately depicts the diversity found in the manga series.

What to Keep and What to Cut

James Cameron worked on the script for Alita: Battle Angel for quite some time before handing his tome-like work over to Rodriguez. Yet despite the script’s length, it had a clear focal point. “[Cameron] found a very specific area to focus on, which is the first couple of stories,” Rodriguez explains. “You introduce Ido with her, and also bring Yugo into it, and then pull some motorball.”

But there’s more to the story than the ever-popular (and violent) motorball scenes. Those who’ve read Battle Angel Alita know that it’s also about Alita’s relationship with others, something Cameron picked up on.

“I thought the area he was focused on helped him focus mostly on the relationship [between Alita and Ido] first and building her up, giving her a really good arc for the first story,” notes Rodriguez. “Even though it was the only story that has a good arc — where she goes from someone who is literally in the trash heap, which is the best opening, and then getting to find out what her inner power really is. I mean, that’s a great story from beginning to end.”

But as Salazar points out, Kishiro’s world is also full of “amazing supporting characters” — like hunter-warrior Murdock or the orphan Koyomi — who pay off later in the manga. Rodriguez, fully aware of this, elaborates, “So, it’s like, some of these [characters] might have to just be introduced later so they can pay off later… and for this story, who all do we need? And what elements does the story need? So it’s a process more of elimination cause there’s obviously a ton of great material.”

What About the Rest of the Story?

With Alita: Battle Angel only tackling a fraction of the source material, you might assume that this new film will be a part of a trilogy — or at least have a sequel in the works. (After all, Rodriguez confirmed to FANDOM that we wouldn’t venture out to the Badlands or actually see Zalem from up high.) But that’s not the plan at all.

“I think the key to any successful property that becomes a franchise is the first movie has to work standalone,” says Landau. “I think that was one of everybody’s goals … to tell a complete, succinct story. The public decides afterward [if they want a sequel], but we didn’t want to go in with the hubris that, hey, we’re going to go in, and we’re going to be making three movies.”

Of course, that doesn’t mean the filmmakers don’t want to explore Kishiro’s cyberpunk world further. Salazar, in particular, can’t wait to jump back into her role. “I want to go to Zalem,” Salazar exclaims. “When I asked Jim, I was like, ‘Hey, when are we making two, man?’ I’m like high on the process, and I’m like, ‘We gotta do that number two.’ He said, ‘We’ll let the audience tell us.’ And I touched my heart like, oh, yeah, that’s what you want to hear actually. You want them to respond to your film and let you know. That’s the way to do it. I’m learning so much obviously from the titans of making films.”